The Search for Dan Gormley 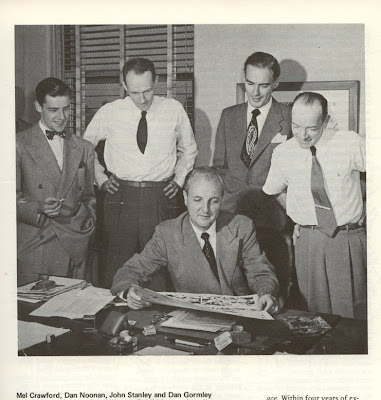 Tom Devlin, of Drawn + Quarterly Books, asked me if I had any biographical information on Dell/Western cartoonist Dan Gormley. (Gormley is on the far right in the fascinating late '40s photograph seen above this text. The comics creators surround editor Oskar Lebeck.)

I don't, aside from a vague knowledge of his career and a recognition of his work.

I asked comics and animation historian Michael Barrier, who replied that he didn't know much about the man. He kindly passed on my query to Hames Ware, who collaborated on the Who's Who of American Comics Books with the late Jerry Bails.

Ware had little to add. It would appear that Dan Gormley is one of those workhorses who has fallen between the many cracks of comix history.

Do you know anything about Dan Gormley? Are you in touch with his family--or, are you related to him? Please come forth with any information you may have.

This information is sought for D+Q's upcoming volumes of John Stanley-written Nancy and Sluggo comics from the late '50s and early '60s. Gormley was, to the best of anyone's knowledge, the artist on these stories.

Gormley's comic book career seems to have begun in 1940 or '41. At first, he helmed realistic features such as "Captain Midnight" and "Gang-Busters" for various Dell titles.

He returned to Dell, now drawing animated cartoon comics. Hequickly developed a bold, vivid style that leant itself well to the genre. He drew some of the Walter Lantz material for the Stanley-written Dell comics. He also did several Disney comics in this period.

I assume he kept on working for Dell/Western. A further simplification of his style is seen in the Nancy series. This is the latest material of his that I've seen. It's possible he kept on doing comics during the schism that led to Western splitting off to form Gold Key Comics. Dell was left with a skeleton comics line, devoid of all the licensed properties that were their bread and butter for two decades.

Most of these are guesses on my part. I've learned to spot his style.

I once thought that Gormley was the artist on the first two Stanley-written Woody Woodpecker one-shots, from 1947 and '48. I don't think that is his work. I do think that Gormley drew the Andy Panda stories in New Funnies, and for the contemporary one-shots of the late '40s.

Gormley was an important part of John Stanley's comics. As this first-ever reprint volume of Gormley's work is on the horizon, more information would be of utmost help.

Please feel free to reply, or to contact me directly, if you have any information on Gormley's life or career. I'll pass the information on to Tom Devlin. Thanks!
Posted by Frank M. Young at 2:53 PM

Somebody was selling a lot of his artwork on eBay a few years ago that probably came from his own holdings, given that Gormley's name was in the auction titles... But have courage, in the age of the Internet, one good thing is that a lot of these guys' descendants get into contact with us bloggers after they Google their dad/uncle/whatever's name (it's how I found out Don Williams was an alkie!). It's happened a few times with me, so hopefully it will for you.

I wish I could be of more help.

I actually show Gormley still active in the 1942 comics, drawing for LOONEY TUNES; he signs the last panel of the Pat, Patsy and Pete story in #9 (July '42).
The lettering and drawing style of this story is very close, albeit not identical, to that of some Bugs stories in LT 6-9 and the Pat Patsy Petes in LT 10 and onwards.
I'd make an educated guess that these stories are also Gormley's, and the PPP in issue 9 looks slightly different because Gormley is trying to imitate George Storm (who had drawn the feature previously).
Of course, this is still only a guess.

Additional note: I don't have LT 3-5, so there could be Gormley stories in some of them—but I can't check firsthand.

I am his granddaughter, Mary. He wasn't in World War II, but his son, my dad, was. His name was also Dan.