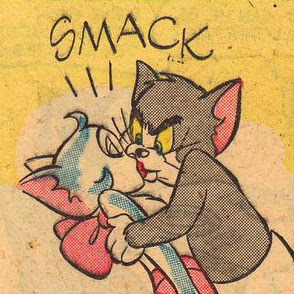 We've done the Little Lulu thing to death recently. I know it's a fan favorite--and rightfully so. (In fact, each time I do a multi-part Lulu sequence, I experience a growth in the Stanley Stories fanbase, which I much appreciate.)

For those in search of the less-known--of those untraveled byroads--here are a pair of "Tom and Jerry" stories from John Stanley's second run on Dell's Our Gang Comics in 1948.

These stories form a bridge from his New Funnies material to his long tenure on Little Lulu. They contain themes familiar to both bodies of work--the slapstick comedy and violent situations of the former, and the character quirks and more restrained, down-to-earth feel of the latter.

Today's first offering, from issue 45, is a solo "Tom Cat" story in which our feline hero offers himself to Toots, his Gloria-esque love interest, as her personal slave. Like Tubby, Tom fashions a costume to go with this self-appointed role. Debasement and humiliation galore occurs herein... 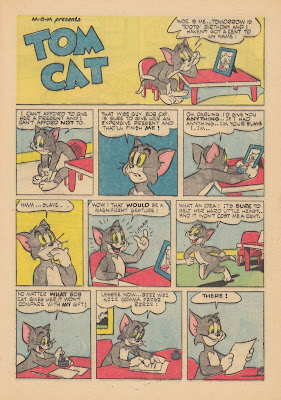 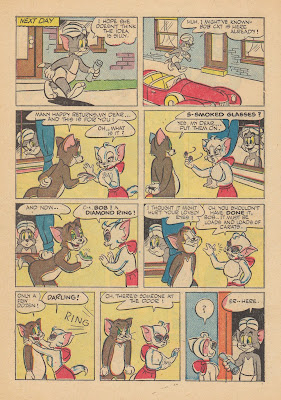 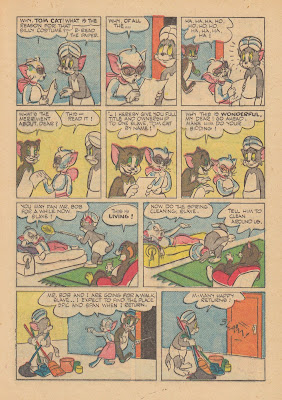 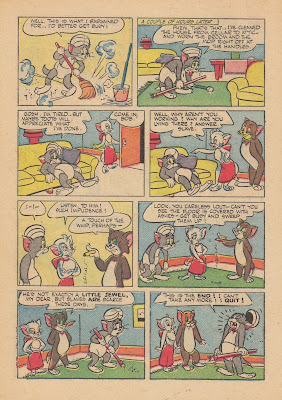 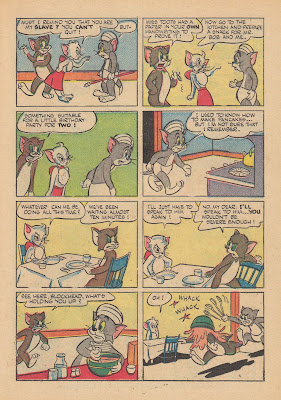 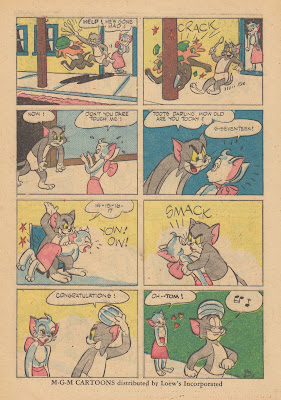 It's not much of stretch to imagine this as a "Tubby" story--with Wilbur and Gloria instead of Toots and Bob Cat. Tom, like Tubby, is utterly self-convinced. His ideas seem brilliant and comprehensive--to himself only. To tools like Toots and Bob, Tom is a schlep out of step with their worldly concerns. (Indeed, here Tom is more concerned with comma placement than with the real-life ramifications of his eccentric ideas.)

Tom shows a touch of self-doubt as he approaches Toots' home with his gift of indentured servitude. In the sequence that begins with p.2's last panel and continues, painfully, across the top half of p.3, Tom vulnerably offers himself to the other felines' condescending scorn and mockery. (Note the "fixed camera" set-up in these seven panels. Stanley often used this technique to build the humor of a situation. We see a comedic, usually abusive, situation unfold through this unflinching eye.)

Bob Cat is one of Stanley's Evil Rich. A user and abuser by nature, he immediately takes Tom's offer with glee, and works our anti-hero ragged.

Unlike Tubby, Tom becomes resentful and rebellious. It's surprising that he goes berserk at story's end. He metes out Stanley's favorite punishment--spanking--to Toots at story's end, giving her one ass-whack for each of her 17 years.

Stanley also uses kisses as punishment from time to time in his Little Lulu stories. Tom adds a forced aggressive kiss as a cherry on this sundae of physical abuse. He exits stage left the self-satisfied victor. He dons his absurd turban to Toots' love-struck sighs. Tom has proven himself a more aggressive a-hole than effete Bob Cat could ever pretend to be.

A universe of perverse behaviors lurk in this six-page story. The characters' actions and attitudes remind me of the epic humiliation comedies found in Thirteen Going on Eighteen. It is fascinating to see these themes evident in Stanley's work of the late 1940s.

As a chaser,  here is the lead "Tom and Jerry" story from issue 46. This story is more in line with Stanley's typical New Funnies slapstick/mind-fudge combo. It transcends the pitiful limitations of the Hanna-Barbera animated original. Within its broad low comedy trappings lurk some subtle and beautifully timed humor. 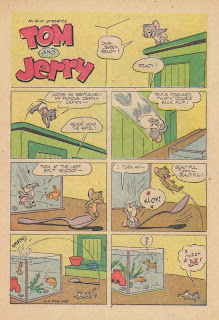 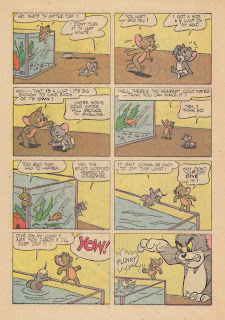 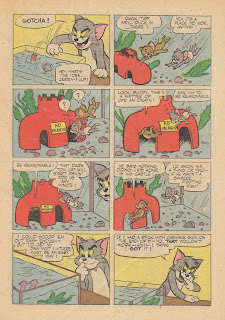 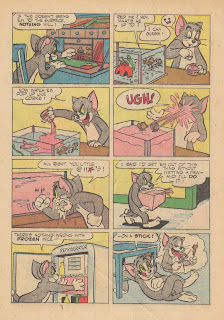 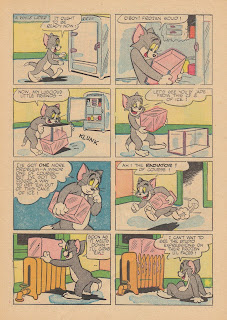 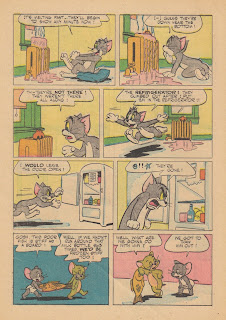 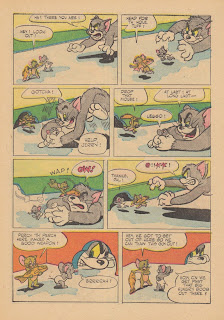 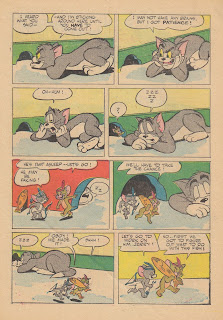 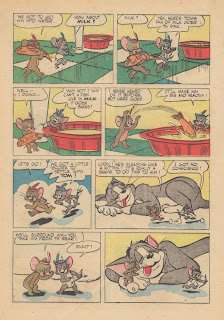 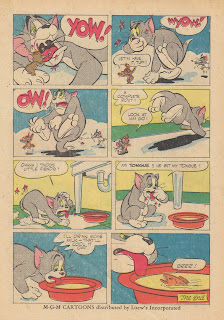 Perverse situations pile up in this cat-and-mouse story. Tom's genuine desire to eat and kill the two mice gives the slapstick of this story higher-than-normal stakes. Tom is an angry, ill-tempered aggressor here--with just a touch of the Tubby Type.

Unlike the Tom of the first story, this version has no vulnerability. He is even stubbornly sure of his own stupidity (p.8, panel 2).

To be fair, the mice are not peaceniks. Although they escape the living-popsicle route, the goldfish does not. Jerry and Tuffy carry the fish's frozen body around and use it as a cane and as a slapstick device. Their final act--tossing the fish in Tom's milk--is another act of cruelty.

As in the MGM cartoons, the mice inflict much more physical pain on Tom than vice versa. Dressed as Native Americans, they stalk the cat and wage a two-pronged attack on his tongue and rear. Humiliated and wounded, poor Tom staggers to his comfort zone--the milk dish--to soothe his aches and pains. Of course, the "Siamese fighting fish," rightfully angered by the discomfort he's endured, makes a vicious bee-line for that pink, plump tongue.

Stanley delights in showing us the moment before or after a violent or otherwise significant action. He ends several stories this way. This is one of the more vibrant examples of this narrative choice. Note that Tom's final speech balloon has no punctuation. This is a stylistic throwback to his earliest comics work.

Also note the sound effect in a speech balloon on p.1, and the unique YOW variant, "WYOW!" on p. 10.

I'm still living on the fly, but I'll try to keep up with my posts here. I miss doing them when time and circumstance don't permit. Thanks, as ever, for dropping by!
Posted by Frank M. Young at 10:33 AM

Labels: Our Gang Comics, Stanley in the 1940s, Tom And Jerry

That last page of the Tom solo story is going to soon be the things of Internet perversion. Thanks for sharing it!

You are most welcome, Thad! Glad to spread the pervy goodness far and wide!

the heck was that...

I mean, does this mean that Toots is a constitutional felon now? Why did Tom feel the need to dress up as a person of color in order to be a slave? I've lost a bit of my respect for Stanley--the theme was...unique...but the dialogue was really stilted.

Almost biblical. The love of Christ to give himself as a servant to a ungrateful love..of course then ending is way different😂