"The Bogyman"—John Stanley's Forbidden Little Lulu Story In Color; Farewell To This Blog 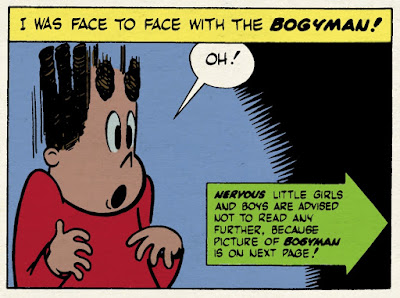 This blog is a decade old. It's a done deal, for the most part. I wanted to mark its 10 years of existence with one last special post.

In addition to revising, redesigning and updating my three volume bibliography of the published works of John Stanley, I also revamped The Tao of Yow, my book of essays on Stanley's work. This new edition is available HERE, or can be had at a discount by contacting me directly at eubiecat at gmail dot com.

The original edition was poorly laid out, and never sat well with me. Not many people have bought the book, so I didn't think I'd upset anyone by improving it. Now, I feel it's as good as it can ever be. As with the bibliographies, these new edition are final. I will not change them unless an avalanche of new information turns up (which could happen, but is not likely). 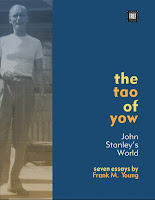 The final section of the first edition of the book featured my colored version of "The Bogeyman," the infamous banned 1950 Little Lulu story. I've decided to remove it from the book, so this first-ever color version, which few people have seen, is my last posting of substance on Stanley Stories. I hope you enjoy seeing the story in color.

Preceding it is the text from the former version of the book that accompanied the story. This feels like an apt sunset for Stanley Stories. This blog, and all its content, will remain on the Web as long as Blogger will tolerate it. I hope it will continue to be a source of entertainment, information and interest in the coming years.