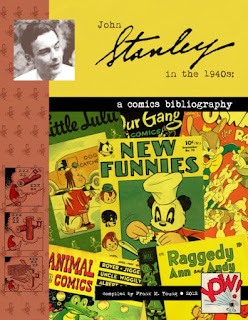 My pal Tom Devlin posted this very kind promo for the still-available, poorly-selling 1940s John Stanley bibliography. He says on the D+Q blog...

It's been said time and time again--Frank Young is providing one of the great internet services with his Stanley Stories blog. Trenchant commentary on all phases of the great John Stanley's cartooning and writing careers would be enough but Frank also does some serious detective work and constantly discovers new Stanley material in the nooks and crannies of the Dell catalog. Easily my favorite historical comics website.

Okay, so I titled this post "Late to the Party" because I'm at least three months late with this post to celebrate Frank's amazing achievement--A comprehensive bibliography of John Stanley's 1940s comics work. For me, this is one of the great comics nerd resources out there. Check it out. Go buy it... Do it!! 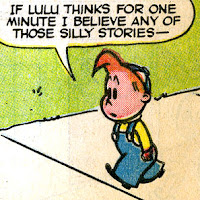 The hundreds of spontaneous fairy-tales that occur in John Stanley's Little Lulu offered their creator a constant, reliable escape route from formula.

These playful comics-within-comics were, themselves, among Stanley's successful recipes for writing a popular monthly comic magazine.

When the two stories presented here today first appeared in print, in two consecutive 1951 issues of Marge's Little Lulu, the title was among the best-selling newsstand publications in America. Stanley was in a position of great potential pressure. He created stories that children and adults read in equal measure, and on completely different planes of enjoyment.

The responsibility might have psyched out anyone who stopped to think about it. Most likely, John Stanley was simply too busy with the work to take stock of his position. Lulu, by dint of its high circulation, was potentially as influential a magazine as Life, Time or The Saturday Evening Post. As a comic book, it, by no means, stood to change public opinion, or address crucial modern issues, as did those slick magazines. But it was as widely read, and its readership depended on its creative team to deliver the goods, month in, month out.