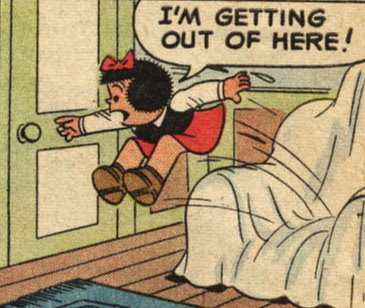 As John Stanley wound down on his 15-year stint writing Little Lulu, he took on a very similar project.

Dell had acquired the publication rights to United Feature Syndicate's Tip Top and Nancy titles when St. John bowed out of the comics biz. St. John, best known for its sophisticated romance comics, had picked up these books from UFS when THEY opted out of funnybook-dom.

Dell created new "Nancy" stories. United Features had generated some original "Fritzi Ritz" tales. UFS' new material was nothing to speak of. It was a first attempt at fashioning comic-book stories from Bushmiller's creations.

Dell also served up original "Peanuts" stories, created by a friend of Charles Schulz's, and crappy "Captain And The Kids" stories that hewed closely to the equally wretched newspaper feature.

Ernie Bushmiller's newspaper strips, the most Zen cartoons ever published, had been reprinted (and, in some cases, re-reprinted) in lieu of original material.

Dell floundered with both titles before eventually dropping Nancy into John Stanley's hands. Stanley wrote a few fine stories for Dell's version of Tip Top Comics--but  most of his effort was reserved for the main title.

Stanley's Nancy, with art by Dan Gormley, hewed closely to the look of the Bushmiller strip. In telling actual narratives, Stanley significantly parted ways with the original.

Bushmiller had narratives in the 1920s and '30s Fritzi Ritz and Nancy daily strips. By the end of WW2, he had let even the lightest story threads drop for a gag-a-day format.

Stanley didn't work up a sweat with the Nancy comic book. He translated the "Lulu" formula to this new series. Nancy=Lulu, Sluggo=Tubby, Rollo=Wilbur, and Spike=the West Side Gang in these particular Stanley stories. The characters may be slightly different, but they serve identical functions to the "Lulu" cast.

Stanley approached this new assignment with surprising vigor--he'd seemed to have written himself out on Little Lulu by this time. Perhaps the slightly different dynamic of the characters put some pep in his creative step.

For example, Nancy's antagonistic relationship with her aunt Fritzi Ritz differs from Lulu's more subservient, respectful attitude towards her parents. Sluggo, unlike Tubby Tompkins, appears to be an orphan. He lives in utter poverty in his own ramshackle house, sans parental guidance.

Stanley invented some inspired supporting characters for Nancy--the borderline-psycho Mr. McOnion, the much-perturbed passive-aggressive neighbor to Sluggo, and his smart-ass, long-suffering wife. Best of all is the other-worldly Oona Goosepimple, who rates as one of Stanley's most enigmatic creations.

Here is Oona's debut story. It was the first of many Oona-borne mind-fudges for poor Nancy. Oona appears benign, but inhabits a world of sorcery and fourth-dimensional shenanigans. She forces Nancy to be her playmate, usually by paralyzing her or taking control of her body.

Oona's house and its contents batter Nancy's psyche with their wigged-out, pixilated doings. Nancy endures a waking nightmare any time she encounters Oona and her clan. Yet, Oona likes Nancy, and though their playdates are terror-thons for the prickly-headed, dash-nosed lass, their friendship endures.

Oona is like a figure from one of Lulu's stories to Alvin, come outside the box of those narratives and into the "real" comics world.

This story also introduces Oona's Uncle Eek, a miniature magician whose #1 foe is a hungry alley cat (also present in this piece). The fearsome YoYos weren't yet part of the Goosepimple household--at least, they didn't surface in this very first story.

Oona must have blown the minds of youthful Dell Nancy readers. She was, apparently, popular. Stanley brought her back several times, including strong appearances in his twin Summer Camp giant-size comics masterpieces of 1959 and '60.

I'm quite glad that Drawn & Quarterly has Stanley's Nancy on their publishing to-do list. From a most unlikely source (I am a hard-core Bushmiller fan, but one does not read the original "Nancy" for character or plot development), Stanley spun one of his most ingenious makeovers of all the licensed properties he encountered, in a long comics career.

This is all so wonderful!

Stanley may have been THE best comic writer in terms of creepy horror. TALES FROM THE TOMB was like Oona Goosepimple stories with all the funny stuff left out. Thanks for this one.

Wow - I was looking for info and pics of the Oona character - my absolute favorite - to show to some artist friends who'd never heard of her! She was so cool and spooky, and as a child, I loved her house! And yet she is so "unknown" to many of my generation...

Thank you for posting this - it came right up on Google in my first search.

Long live Oona... I named a favorite (and of course mysterious) cat after her.

I remembered Oona Goosepimple from old Nancy comics I had as a kid and always thought it was unusual that all of a sudden there were stories, and kind of weird, spooky ones at that. Thanks for this blog post, it all makes sense now! :D

I always liked Nancy's encounters with the yo yos!

I thought I remembered Oona from old comics when I was a child in the 50's but I'd forgotten her name and which comic. I wondered for the longest time if I'd imagined her. I've been searching for "Uma". Thanks to this blog post, I found her. She was my favourite.