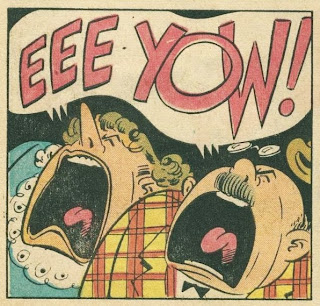 Given how poorly my 1960s John Stanley Bibliography has sold, I'm feeling rather discouraged about the hard work it will take to put together the 1950s volume. In the work I've done so far, if only to satisfy my own curiosity, I've made some pleasant discoveries and done some re-evaluations.

The richest vein I've struck is in the early 1950s title Henry Aldrich, which Stanley wrote for his most talented collaborator, the cartoonist Bill Williams.

As Stanley entered his most beloved period on the best-selling Marge's Little Lulu title, and just before he took up cartooning again for the eclectic Marge's Tubby spinoff, he wrote several issues of this teenage analog to Lulu and Tubby.

Stanley's Aldrich material is often surprisingly sophisticated, and the book's unusual format allowed him to experiment with story lengths. Today's offering is one of Stanley's longest regular-issue narratives: 31 pages of unfolding comedic mayhem, tinged with black humor and featuring two protagonists who never quite understand why their actions have such a strong effect on the world around them.