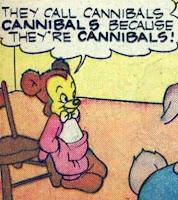 New Funnies was the most spontaneous and slapdash of the comics edited by Oskar Lebeck for Dell Publications. Its bar was set quite low. Quality of story and art material wavers dramatically from issue to issue.

In 1946 and '47, the title was a place for John Stanley to blow off steam, as he prepared for what he didn't yet realize was a 15-year run on Little Lulu. His story (and art) for that series is impeccable. Perhaps because the licensed property was of a higher status (and its creator was initially looking over the collective Lebeck shoulder), Stanley's Lulu is tighter, less risky and more grounded than any of his other work in comics.

While under close watch on the early Little Lulu one-shot issues (most of which you'll find elsewhere on this blog), Stanley catered to his chaotic, more off-the-cuff impulses in New Funnies. He did some of his best--and worst--work for the series.

At their finest, these stories are freewheeling, very funny and full of a street-wise charm, In their low points, they reveal their creator's burn-outs, hangovers or crunched-deadline hackwork. New Funnies was clearly not a high priority on either Dell's or Lebeck's agenda.

Offered today are Stanley's 31 pages of story for issue 116 of New Funnies, cover-dated October, 1946. I've isolated these three stories in a CBR file that you may download HERE. (If you don't like the CBR format, just rename the extension to RAR and open it with WinRar or other, similar programs).

Spoilers abound in the text that follows. Those who read the following without reading the stories themselves are living far too dangerously for their own good.

Something Old, Something New... 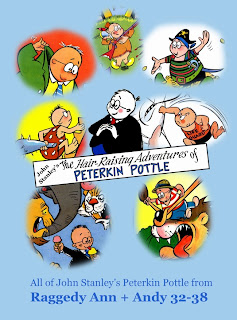 A complete collection of John Stanley's "Peterkin Pottle" stories has been posted, for free, at the Digital Comics Museum. Richard Davidson did this compilation, and it's handy to have all seven of these stories in one spot. Click on the image to go to the download page. 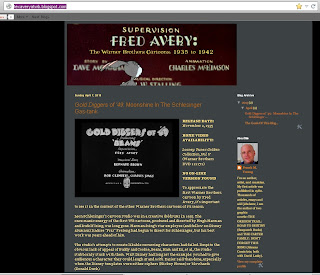 I have started a new blog which, like Stanley Stories, focuses on the work of one creator. In this new blog, I'll look at the Warner Brothers animated cartoons of Fred "Tex" Avery, and, I hope, trace the important developmental paths of these 60+ films--many of them landmarks in the reclamation of animation from the Disney influence. Click on the above image, or visit it at http://texaveryatwb.blogspot.com/