Just a couple of recent developments you folks might find of interest... 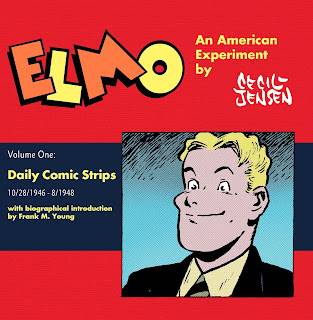 I spent the past two years restoring Cecil Jensen's indescribably droll, dark and whacked-out newspaper comic strip Elmo. It ran from 1946 to 1948, and it defines the notion of a concept that came before its time.
The strip was scorned by the public-at-large, badly printed in the few newspapers that carried it, and destined to be a forgotten treasure of 20th-century American pop culture.
No longer. This 206-page 8.5" square trade paperback contains the entirety of the original run of Elmo, augmented with a biographical introduction by myself (which contains several examples of Jensen's editorial cartooning, for which he was best-known).
The comic strips have been painstakingly restored from the best sources I could locate, and it took a lot of hard work to bring this book to fruition.
As with my four books on John Stanley, Elmo is self-published, and can be purchased HERE for $14.99 USD. You may preview the book at this link. If you appreciate the humor of John Stanley, I think you'll cotton to Elmo. 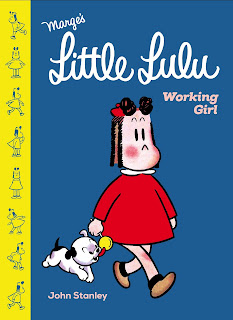 And, of course, coming on November 26th is this book--the first in a six-volume series that collects my favorite Little Lulu stories and reprints them accurately for the first time at full comic-book size and in color. The first volume, Working Girl, features the three debut Lulu comics, which were John Stanley's work from cover to cover, art and story. A selection of stories from the next seven one-shot trial issues and the first six issues of the regular series rounds out the first volume.
Prior reprints of these three comics were done from amateurish tracings which Bruce Hamilton commissioned in the 1980s. Those impostors are a vulgarity, and can be discarded. This is the real deal. The production staff at Drawn + Quarterly have done these stories proud. All but one issue used in this volume comes from my personal collection--as will the bulk of the stories in subsequent books.
Each book has an afterword by me discussing John Stanley's career and spotlighting a handful of exceptional stories--kind of a fancy, tangible version of this blog in its heyday.
Little Lulu: Working Girl may be pre-ordered HERE. These books will come out on a regular schedule. I'm working on the scans for the fifth book in the series at present. It's my hope that these books will establish an adult readership for Little Lulu. I am honored to be the co-editor of this book series.
Posted by Frank M. Young at 10:01 AM 12 comments: