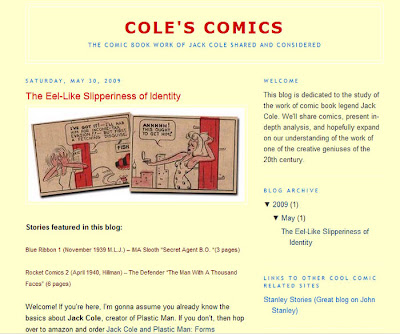 Click H E R E to visit COLE'S COMICS, a fine new blog on the cartoon artistry of writer-artist Jack Cole--a person who, like John Stanley, merits the label of "superb comics creator." (I dislike the term 'genius,' and shun its use when possible. Now's the time to go back and tally up how many times I've used the word in this blog!)

Paul is a longtime friend. Many is the hour we've spent discussing comics, and Jack Cole has been a frequent topic of our talks. I'm excited that Paul has begun this blog.

If you think Jack Cole is just about "Plastic Man," you've got another think coming. Be sure to visit COLE'S COMICS regularly for great stories and compelling critical commentary!
Posted by Frank M. Young at 10:56 AM 2 comments:

Just in time for the hottest day this year in Seattle-- here's the grand finale of this beloved 1957 Lulu-Tubby summer camp special.

"The Lost Mumday" walks the fine line between canned sitcom and perverse comedy-of-embarrassment. Mumday is a pervasive second-string theme of the Lulu-verse. The boys' solemn determination not to speak to girls on a selected day is forever destined to failure.

When Stanley has Tubby and Iggy indulge in some mild cross-dressing, and places them in the eye of the hurricane (the girls' camp), the story picks up appreciably. Iggy's failure to maintain the feminine ruse gives a potentially stale story a nice little lift.

"Voo-Dood It?" follows an innocent arts-and-crafts project to its unexpectedly nightmarish end. Tubby's infidelity to Lulu (by a blonde Gloria-esque hussy) causes the rotund one a great deal of superstitious anxiety. All's well in the end. Bonus points for the droll non-sequitir of "Do you like peanut butter?"

"Night Noises:" here's a beautiful story, with a noble blend of melancholy and machine-gun verbal laffs. I love the girl camper's comment that the sound of the katydids brings with it sadness--it signals the end of summer.

Three pages is all this poem-like story requires. This is my favorite story in the book.

In conclusion, "Summer Souvenirs" masterfully melds melancholy and mirth. Lulu's OCD-fueled rant, in the fifth panel of the first page, is one of the funniest moments in all of John Stanley's work.

Once again, this story is riven with melancholy. The kids have pangs of loss--the closure of barely-begun friendships, the return to the dullness of school and home life.

The story arc of souvenirs being traded is handled with real grace. Tubby delivers the final kicker, in a moment that brings his self-absorption and egotism to the fore. It takes the edge off the sadness that permeates these last two stories.

Tubby restores his old world, in full, in the book's inside-back-cover gag page. At the end, we are all reassured by the Dell Pledge to Parents. Remember--this has been a wholesome reading experience!

As promised, here's part three of our '57 Summer Camp Funfest.

I've decided against including all the activity pages. They eat up too much space. Altho' said pages may have nostalgic oomph for those who read this giant as a kid, they're low on actual do-I-really-need-to-see-this value.

Here are the next four stories in this epic shebang.

These stories have a less hard edge than contemporary pieces in the monthly Little Lulu magazine. This is not a complaint; it's an appreciation.

100 pages of high-octane sitcom might wear out its welcome, even on the staunchest reader. Thus, it makes sense to turn the intensity down a notch or three. Focus is more on characterization than boffo gags.

Stanley makes the assumption that the reader is hep to the relationships, social status, and personalities of his cast of characters. The subtleties of these stories are much better appreciated by those who know the lay of Lulu-Land.

"Package From Home" is part of a group of stories in which objects and individuals from the real world intrude upon the sexually segregated Eden of Camp Shakatot. You'll recognize the terrifying instrument that turns up in Tubby's from-home box.

Someone in my crowded urban neighborhood just got a puppy. The poor canine suffers from seperation anxiety. Night and day, he/she makes noises much like the ones I imagine emanating from Tubby's violin.

Usually meant for comical effect--an over-reaction to a difficult but repairable crisis-- doomed...doomed... DOOMED! gains a more sinister edge from the late '50s on.

It deserves to be added to my list of Stanleyisms. Someday soon I'll do a revised post of Stanleyisms here, and include excerpts from various Stanley stories as illustrations.

"How To Handle Girls" plays upon the arrogance of Tubby and his clubhouse pals. More outside intrusion, in the form of sociopathic Wilbur Van Snobbe, befouls the lads' assumptions that they have the upper hand on Lulu, Annie, Gloria, et al.

Status shifts and social frustration are the themes of this story. Laffs galore via table-turning humiliation. The Wilburs of the world are always there to upstage the rest of us.

"Little Itch's Singing Lesson" provides the required fractured fairy-tale. Lulu's purgatorial duty is to tell these improvised stories to bratty Alvin, in a (usually wasted) attempt to calm him down. Alvin would be on some major anti-depressants today.

"Surprise Visit" is the gem of this batch. Lulu's father is brutalized while trying to engage with his daughter in the increasingly dangerous--and socially humiliating--world of Camp Shakatot. While laughing at Mr. Moppet's misfortunes, the adult reader can easily sympathize with the surprisingly realistic mishaps that occur. The business with the oars is particularly spot-on.

"Stormy Night" provides an apt coda for this third helping.