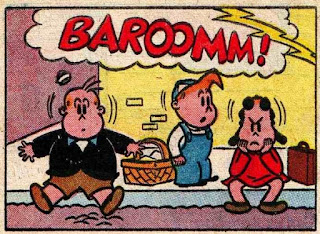 Long time, no post-- Wait a minnit--this blog is supposed to be "dead!" Finito! Kaput! Yes and no. My major work is long done here on Stanley Stories, but I'm aware that it finds new readers every day. So hello, new reader(s)... Frank M. Young here. Remember that middle initial, folks. There's a lotta Frank Youngs in the world. Such a clunky name... you wouldn't think it was so darned popular!

Sometimes I'm asked to explain the appeal of John Stanley's work. It's better read than parsed out; the work speaks for itself. This is a question I've tried to answer here many times over many years. Marge's Little Lulu #109 was part of a recent comicon purchase. I didn't have the issue, and wasn't wild with joy at the acquisition. It's from the post-peak period of Stanley's work on the series. Many of the post-1955 issues are rather shrill and mechanical. One gets the sense that their creator approached each new issue, by this time, with a quietly grumbled, "Oh, jeez, what can I possibly do that I haven't done a million times?"

Ritual and repetition are part of John Stanley's fabric, and he was adept at sewing attractive new "outfits" for his characters from well-worn patterns. The lead story in this July, 1957 issue of Lulu manages a complex comedy of characters without really going anywhere. "Saturday's Child" sets the reader up for one of Stanley's comedic specialties--a trip to the beach with bratty, unruly Alvin and quixotic, self-obsessed Tubby.

Stanley did such a story in his first Lulu comic book in 1945. In 1957, the faithful reader of the series might have silently mouthed "oh, boy" while scanning page one of "Saturday's Child." Conflicts in the sun... hot dogs, balloons, chances to annoy other beach visitors. Arguments! Salt water! Alvin getting lost! The possibilities are endless.

Here, Stanley does a Seinfeld. "Saturday's Child" is a story about a trip that never happens. The three kids don't leave their block. And, unusual for this late in the run, they act like children. Read, and then we'll compare notes... 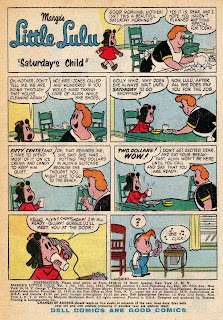 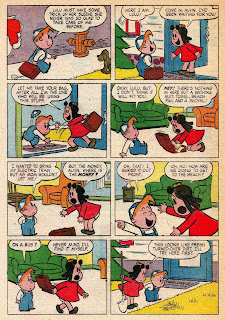 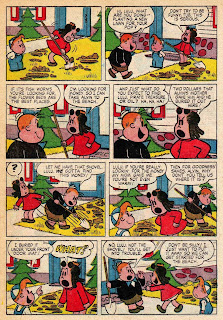 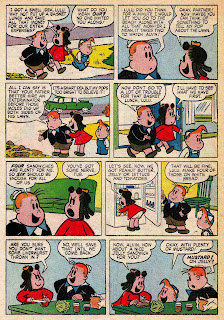 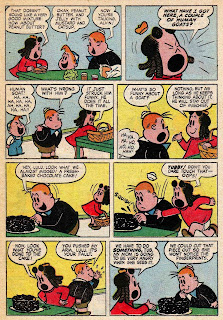 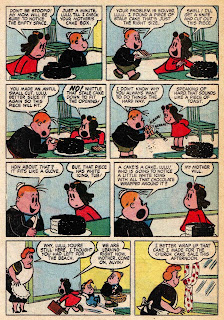 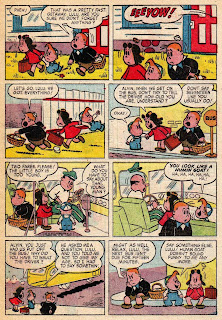 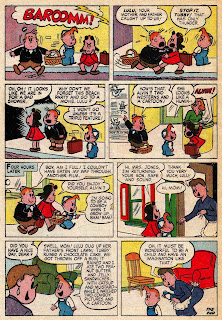 "Saturday's Child" is proof that John Stanley had some affection and connection with the "Lulu" cast. Using a few props (shovel, sandwich makings, cake) he fashions a comedy of character interactions that is funnier and more affecting than that trip to the beach might've been.

Stanley allows his characters to absorb aspects of each other's persona. At the end of page one, Lulu is struck by greed when she hears Alvin's mother has sent along two dollars as pay for minding her br-- er, son. Those two bucks had buying power of almost 20 dollars by today's standards. Lulu becomes Tubby for one wonderful moment:

Before the trio leaves the house, their kitchen futzing contaminates a fresh-made chocolate cake. Fearful of repercussions, Lulu panics. For one moment, Tubby assumes Lulu's usual mantle as the voice of reason--although his solution is guaranteed to fail: 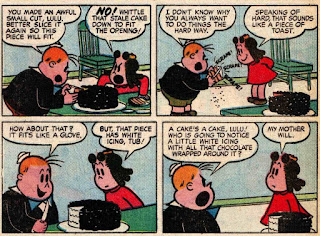 Alvin is immutable. He brings chaos to the table via his skewed worldview. He imagines that he's "buried" the two bucks under the Moppets' front doormat. He fails to mention his fantasy to Lulu, who ruins the front lawn digging for the money. The aftermath of that damage is a story untold; Stanley lets that hang in the reader's mind.

In the kitchen, Alvin demonstrates his unusual cuisine choices--peanut butter and jelly with catsup suits him fine--and gets hung up on the phrase "human goat." Improv performers would deem this a "callback"--in this case, to a recent LL story "Two Foots is Feet," from issue #94 (and found in this ancient post here).

"Human goat"--or "humin," in Alvin-speak--is the agent of ruin for the kids' beach adventure. Alvin never fares well with bus drivers, and after the three are 86'd from public transport, Mother Nature provides the final curtain on that sand 'n' sun shenanigan. Lulu, Tubby and Alvin spend four hours staring goggle-eyed at Western movies and choffing on random sandwiches.

A good time is had by all, as Alvin reports in a breathless unspooling of the day's non-events: 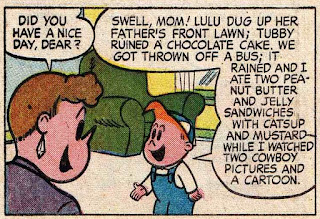 This is what makes John Stanley's work appealing and important. His best comics stories are a master class in fiction writing. Nothing needs to happen-happen, if the characters, and their inter-relationships, are strong and well-wrought. The success of "Saturday's Child," among hundreds of other "Lulu" stories, hangs on the durability and reliability of the characters.

By 1951, Stanley had Lulu, Alvin and Tubby set in stone. He knew them inside out, and could place them in any situation, in any combination, and get something out of it. His investment in creating believable personae for these three characters paid off : they wrote their own stories. Put them in a room with one object and their reactions and interactions will develop a narrative. Any fiction writer--comics, prose, cinema, theater-- can learn from Stanley's work. Sometimes all you need are sandwiches and a sidewalk.
Posted by Frank M. Young at 8:24 AM No comments: