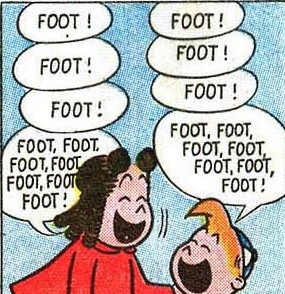 Special thanks to Ed Buchman for helping me with the issue number that contains this story. A big box of un-numbered comics can be like a needle in a haystack...

It's never been reprinted, as it just missed the cutoff date of the Little Lulu Library hardcovers (and their pint-sized simulacrum from Dark Horse Comics).

Lulu was in top form through the late 1950s. By Stanley's last year on the title, he had pretty much exhausted what he could do with the characters.

I have not done the math to back this up, but it seems to me that Stanley wrote more Lulu material in 15 years than Charles Schulz wrote for the entire run of Peanuts.

Stanley had more breathing room in his comic book stories, which were usually six to eight pages, but could run over 20 pp. at times. The panels on Stanley's pages could comfortably hold more information than the regulated frames of Schulz's strip.

At the very least, both features, over their runs, racked up a comparable volume of creative work.

By 1959, Stanley had done exhaustive variants on every situation that seemed logical (or illogical) for the Lulu cast. He had produced a 32-to-48 page comic book, like clockwork, once a month, plus writing the Tubby title, and semi-annual 80 to 100-page special issues.

It is a staggering amount of work. None of it is poor. Even Lulu's last year, while a bit mechanical, still contains some wit and character.

The story you're about to read is an example of Stanley willfully breaking the series formula to try smething new.

In 1956 and '57 issues of Lulu, Stanley plays with language. His characters not only talk more, but the volume of their words goes from whispers to top-of-the-lungs shout-outs. There is a 1957 Lulu story in which two characters have a protracted and very loud argument. I'll have to dig out that issue and scan the story.

Back to today's feature... I know of no other comics story that so delightfully captures the absurdity of language, save some episodes of Bill Griffith's Zippy newspaper strip. The idea that a word, even a commonly used word, can become screamingly funny, is something that most people have encountered at least once in their lives. (It happens to me almost daily; that's probably why I'm a writer.)

We also see a rare glimpse of brat-next-door Alvin Jones' father. Oh, the shame that man must have felt...

I hope this story brightens your day. And there's a chaser!

For dessert, here's a gut-bustingly brilliant and funny pantomime one-pager, also from LL #94.

I read "Two Foots is Feet" to my three-year-old daughter for the first time (for both of us) a week ago. I have rarely seen her laugh so hard. One of my all-time favorite Lulu stories.

Tom, that's wonderful news! I find a lot of friends' children really enjoy Lulu in general. It's impressive how those stories reach across half a century or more to speak to modern children.
That must have been a joyous experience to see your daughter have so much fun with that story! :)