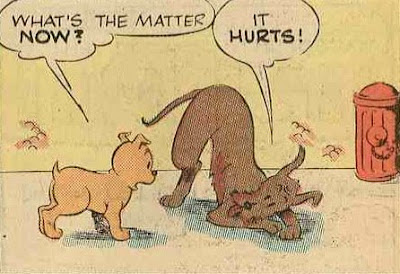 "Jigger" was John Stanley's first original creation for comic books. Prior to this strip, Stanley had drawn some "Little Lulu" and "Woody Woodpecker" stories. This feature lasted for seven installments. With the sudden demise of Animal Comics in 1948, "Jigger" vanished.

Jigger and Mooch are two city dogs. They're homeless, and, in the tradition of John Stanley's marginal, outsider characters, they're driven by needs.

The dogs like to eat; they always need food. They value their freedom; thus they need to avoid the dog catcher. They like a peaceful life; they need to escape bullying alpha-dogs.

These two stories show the severe visual metamorphosis of this Stanley strip. It ran in the high-quality Dell anthology Animal Comics. Under the flimsy roof of its slick-paper covers, a 1946 kid could find strong work by Walt Kelly, Dan Noonan, Oskar Lebeck and other Dell staffers of note.

Their grave struggles are portrayed with laconic gentleness. This off-beat approach is common in Stanley's 1944-46 efforts.

As with Stanley's best work, "Jigger" celebrates the eccentricity of its characters. The dogs' naivete, as they explore a puzzling human world, is similar to the experience of the mice in Stanley's earlier Tom and Jerry feature for Our Gang comics.

Notice how different the drawing and character design is in these two stories. The first story (if indeed fully finished by Stanley's hand) is quite primitive-looking. The drawing has some charm, but is several notches below the stunning work turned out by Kelly and Noonan.

In the third story (the second one here), Stanley has jiggered "Jigger." The characters are now ultra-stylized. Mooch is unrecognizable from his first appearance.

The pillow-like contours of the characters, drawn in thin, hard pen lines, are strikingly achieved. It is among the tightest rendering of Stanley's career. He would abandon this "clear line" style after "Jigger."

Stanley settled on the odd pen-name of "Biff" for this feature. What that means, I dunno. Stanley's touch is evident in the drawings of people, and in Jigger's simple, appealing design.

The setting is even more familiar--the urban Everywhere that also plays home to the Lantz and Lulu characters. It's not as cramped as the tenement settings of the later Dunc 'n' Loo strip, but it's not Suburbia, either.

The first story has one of Stanley's funniest comic-book sound effects--the CHISH and CHURFs of Mooch's successful digestion of a rubber dog toy. I doubt these unique SFX made a second appearance in the Stanley universe.

For your reading pleasure, here are the first and third episodes of "Jigger." Enjoy these stark but charming stories!