2011 PREFACE: This was one of the first posts on Stanley Stories. At the time, I knew Stanley's work less well. The purpose of this blog has always been for me to explore John Stanley's comics out loud, and in public. Thus, I occasionally find the need to append an early post.

This story is clearly drawn, written and lettered by John Stanley. He is in fine form here, as he is in the previous two issues' "Woody Woodpecker" stories for New Funnies. His spiky, expressive pen line brings an enormous energy to this dryly morbid story. That Stanley was already such an adept cartoonist, prior to his long engagement on the Little Lulu series, is something that most comics historians have overlooked.

Stanley's cartooning took a blow in 1945. He had to mimic the primitive, near folk-art cartoon style of Marjorie Buell in his role as writer-artist-adapter of her valuable commercial property. The look and feel of Marge's poor cartooning had an adverse affect on Stanley's work through 1946.

He reclaimed his own, superior cartooning style in 1947, with a series of dynamic, striking "Woody Woodpecker" one-page gags, and with his first comic-book original, "Jigger and Mooch," which he wrote and drew for the final issues of Animal Comics. Those pieces are available elsewhere on this blog. Admirers of John Stanley the artist are advised to seek these posts out.


<><><>
Just in time for the Labor Day weekend--that last hurrah of summer--here's a 1944 "Woody Woodpecker" story set at the beach. Our favorite sociopath vends deadly hot dogs and saves the day!

Such stories make me wonder how often 1940s folks encountered food poisoning or other invasive bacteria in their daily lives.

This story continues the venerable link between nutty cartoon characters and the sale of hot dogs. Ub Iwerks made a wonderful Mickey Mouse cartoon in 1929 called THE KARNIVAL KID. This may be the wellspring for the whole hot dog fixation in animated cartoons--and, later, comic books. It's also the rowdiest, most un-Disney MM entry.

I won't be hitting the beach this weekend--it's rainy and cool in overcast Seattle. I don't eat hot dogs, either--well, perhaps I'll encounter a cartoon octopus! 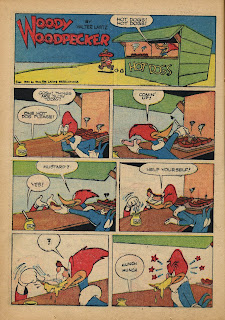 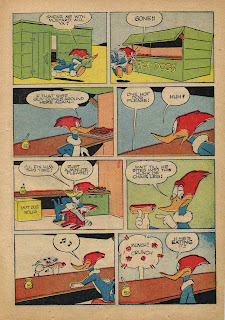 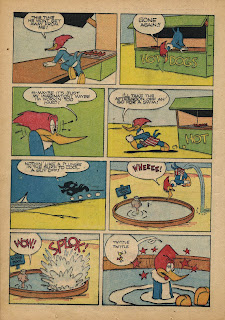 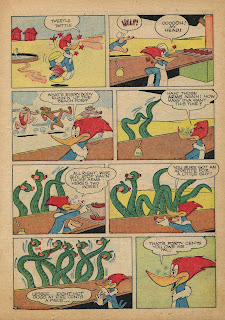 It dies. Everything's immediately back to normal. Move along, nothing to see here.

Welcome to normal at last. I like normal style of life, normal girls, normal shoes. Things that makes me ab-normal?
Just a question: who the hell was that little man-woman-child at the beginning of the story? It sounds such a Twilight Zone. I think I'm hearing the theme tune in the distance. Stanley never ceases to amaze me!

What would the comic's code have to say about this story? Woody is out to poison the population!

Good news: the sentient hot-dog thing starts earlier, so there's more weirdness of that type to see. It comes from the popular 1910s urban legend that hot dogs were made with dog meat (hmm... before health laws, maybe they were). In both Disney's ALICE'S MYSTERIOUS MYSTERY and Mutt and Jeff's DOG GONE we see neighborhood pooches being put through the grinder, or being prepared for same.
The specific sequence in KARNIVAL KID is directly anticipated by one in Oswald's ALL WET, also out on DVD.

If you'd like to see more equally wild Mickey cartoons, try MICKEY'S FOLLIES and THE SHINDIG for a start... both easily available on YouTube.

Meanwhile, thanks for the ongoing barrage of briliant Stanley material. I'd never known he did the 1950s KRAZY KAT, for instance, and I'm thrilled to see more of JIGGER. Wonderful stuff here, and I take my hat off to your research! (Good thing, too. The hat was an essential part of my Spider disguise, so it wouldn't do to wear it among ordinary citizens.)