This Woody Woodpecker story, from late in Stanley's stint on Dell's New Funnies, is a curious shaggy-dog anecdote given a noir angle worthy of suspense writer Cornell Woolrich. Stanley spoofs the very 1940s notion of "murder next door"--the idea, which peaked during the horrors of WW2, that quiet, respectable people could do the most unspeakable things...and that cads, cut-throats and killers walked right beside us, every day.

Note how Woody doesn't appear until halfway through the story--and how the neighbors suspect him of being a homicidal fiend! This early post-war paranoia would usher in the tense, repressive mood of the 1950s.

The head policeman looks much like an older version of a self-caricature Stanley drew while in high school. It also matches a caricature of Stanley Walt Kelly drew into one of his Dell-published Pogo stories. 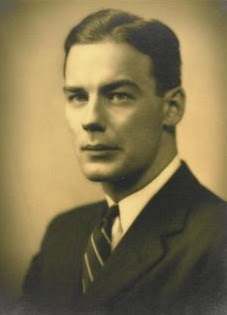 The unshaven, fleshy, pipe-smoking cop is a caricature of Gollub; the chinless wonder with the hangdog mug is Dan Noonan.

The Dell "kiddie" comics of the 1940s are rife with in-jokes. Stanley, Walt Kelly, Gollub, Noonan, Dan Gormley and Carl Barks (who worked in California, far away from Stanley's East Coast turf) all appear in one another's stories as character names.

Another prime Stanley location appears: the cemetery. (Correction: it's a dug grave in a vacant lot--a generic setting that has strong ties to noir fiction, past and present.)

I could compile a thick volume of Stanley stories that use a cemetery as a setting. Moreso than any of his Dell comrades, Stanley had a pre-occupation with ghosts, gravestones, and other ghoulish Gothic images.

Under the protective "Dell Comics are Good Comics" umbrella, Stanley got away with a lot of hair-raising, macabre material. Many of the stories Lulu tells Alvin are grade-A horror yarns, worthy of Tales From The Crypt.

Stanley was only censored by his publisher once, when a Little Lulu story called "The Bogeyman" was deemed too nightmarish to see print. It was deep-sixed for decades, until first published in the hardcover Little Lulu Library. It's once again in print, via Dark Horse's digest-sized Lulu reprints (which were obviously shot from the hardcover volumes, as their contents are identical).

"The Bogeyman" is an extremely upsetting story. Its 1951 publication would have been a boon for the therapists of the 1980s and '90s, as deeply-scarred baby-boomers who read the story would be in need of deep-dish counselling--possibly for their entire adult lives!

Back to Dellian name-dropping... In one memorable Oswald the Rabbit one-shot of 1946, Walt Kelly uses John Stanley's name as a sound effect. How this must have puzzled tots of '46! Kelly wrote and laid out this fascinating "Four Color" issue (#102) which falls outside the scope of this blog, aside from its name-dropping salute to Mr. S.

I wish I knew who the artist of this, and other 1946/7 Woody Woodpecker stories, was. Though no Dell artist succeeded in drawing Woody as he looked in the contemporary Walter Lantz animated cartoons, this cartoonist did some compelling finishes to Stanley's layouts. I like his Thurber-esque human characters.

As a bonus, I've bookended this story with one-page gag fillers written and drawn by Stanley. These appeared on the inner covers of a few 1947 New Funnies issues. Stanley left the title by #130, but the gag filler format was continued, albeit poorly.

I'll see you in a few days with some more Stanley Stories! 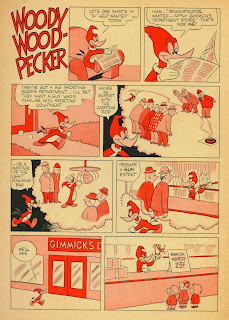 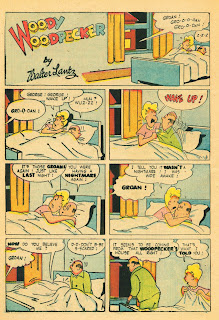 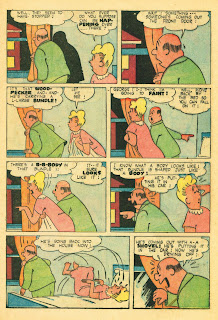 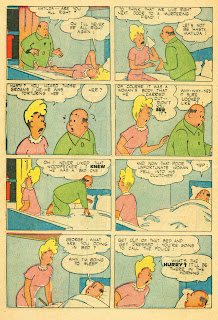 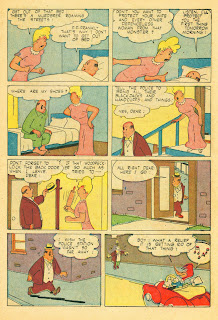 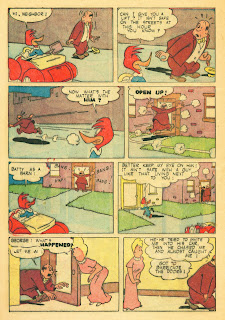 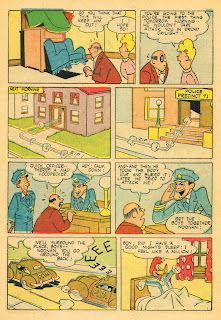 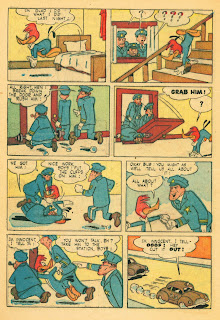 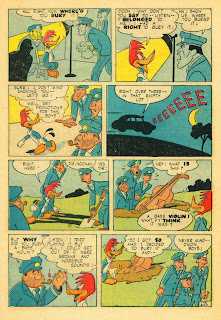 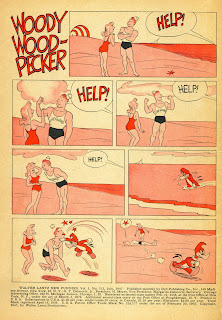 Interesting. I'd not realized Stanley worked on Woody Woodpecker.

What struck me most was the fact that the husband and wife were in one bed and even make contact! Rob and Laura Petrie still couldn't do that on TV decades later.

Yes, Stanley wrote (and sometimes drew) this feature from 1943 to 1947. Only two or three issues of NEW FUNNIES from # 86-128 contain WW stories with no Stanley involvement.