Oswald Rabbit and Toby in another freaky fairy-tale: from Four-Color #67, 1945 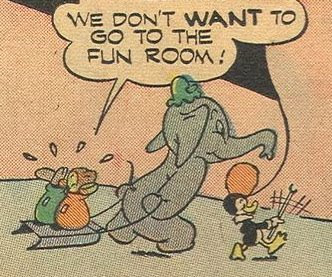 As promised, here is the long lead story to Stanley's first Oswald Rabbit one-shot from 1945. As with "The Secret Six" (posted here prior), this story contains some John Stanley milestones.

The story is Stanley's first funnybook fairy-tale, and, appropriately, it contains the first of many witches-slash-supernatural figures that populate his comics.

This story's playfulness is striking. Stanley rarely broke the fourth wall with his reader. Lulu might sass the narrator of her stories to neighbor-brat Alvin, and on occasion a character will reference his/her status as a blob on ink on a paper page.

This is a remarkable incidence of sheer playfulness with comics itself. It is well-contained within a dense narrative. This story combines elements of "Snow White" and themes from other fairy-tale classics. There's even a reference to James Thurber's The Last Flower.

Stanley leaned heavily on genre tropes as he spun his own variations. These riffs are usually tongue-in-cheek, and typically have strong splashes of darkness [in best fairy-tale fashion].

He adds one beautiful element--the "merry witch" demands that the two fuzzy protagonists must spend a night in her topsy-turvy screwball castle without laughing.

This command would be especially potent to a child reader. Kids are typically shushed and suppressed from outbursts of spontanaeity...mostly because they get on the stressed nerves of uptight adults. To ask a child NOT to laugh is to increase the desire to do so.

This is a brilliant touch. With this edict, Stanley rains a garden variety of Smokey Stover-ish screwball visuals on the reader. It's as if he dares the reader not to guffaw. By doing so, the reader violates the witch's ultimatum.

Page 22 of this story is a thing of beauty. IMHO, this is one of the greatest single pages in 1940s comics.

Stanley didn't return to the fairy-tale genre until it was established as part of the monthly Little Lulu program in the late 1940s. He would continue to create free-standing stories in the genre throughout his comics career. [See our second post, and the previous post, for two strong examples of these stand-alone narratives.]

I really like the artwork in this comic book. It's extremely expressive and lively. I also dig the free-hand panel borders.

I wish that the average independent comic book of today would give me an equivalent helping of compelling themes, adept, spirited cartooning, and stories of comparable length and complexity. I'd gladly plunk down five bucks for such a funnybook. I've given up on the mainstream companies...they will never publish comics such as this again. Them days is gone forever!