Marge's Tubby: The Guest in the Ghost Hotel

For our first Stanley Story, here's a wild, dark story written and drawn by Stanley: "The Guest In The Ghost Hotel." This appeared in issue #7 of Marge's Tubby, a then-quarterly spin-off from Dell's mega-popular Little Lulu comic book.

Lulu never appears in Tubby's title. Thus, Stanley was able to focus on the fascinating and flawed Tubby Tompkins--who, with E. C. Segar's Wimpy, is one of the great comics outsiders.

Tubby never quite fits in. His status is in permanent jeopardy with his supposed friends, his foes, authority figures, parents, etc. Like some of Stanley's other anti-hero protagonists (Woody Woodpecker, Loo of Dunc and Loo, Peterkin Pottle, e.g.) Tubby is his own worst enemy.

Pride and an unchecked male ego are his eternal undoing. Tubby wants to be liked, but never for himself. He seeks approval by trying to be a person he isn't. Yet he never gets it! Tubby's remarkable lack of self-awareness makes him a great fictive creation--far richer and better-defined than Marge Buell's original, one-dimensional gag cartoon concept.

This story is from a run of early Tubby issues which Stanley wrote and drew. These issues are Stanley's only published 1950s work as a full comics creator. It's surprising that these have never been noticed as his complete work until very recently.

Compare the artwork to his "Peterkin Pottle" or "Jigger" stories in Raggedy Ann and Andy and Animal Comics if you have any doubts that Stanley illustrated this story.

This story has a number of themes that surface throughout Stanley's comics-writing career. It begins with a primal scene of trauma--a little boy trapped in a pit of quicksand, deep in the lonely woods. It then morphs into a wildly imaginative and morbid supernatural comedy, in which Tubby is in constant peril.

This story could almost be an E.C. horror tale, with some minor changes to the script--the first being super-long, unreadable blocks of descriptive prose at the top of every panel. I could write a parody of these deadly piles of text, but if you've read an E.C. story not written by Harvey Kurtzman, you know the drill.

"The Guest in the Ghost Hotel" is one of Stanley's darkest stories--from a career that regularly featured liberal horror and fantasy elements, most of them highly imaginative and effective.

I love the looseness of Stanley's artwork in this early Tubby run. It has some qualities of contemporary magazine cartoonists. His line has a great life to it, and his figures sometimes approach calligraphic caricature.

I hope this seldom-seen story produces a curious mixture of amusement and discomfort! Enjoy...

Thanks to my great friend PAUL TUMEY for pointing out this story to me. 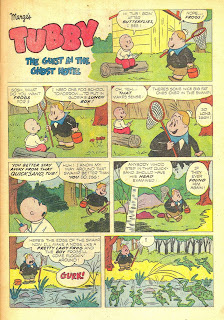 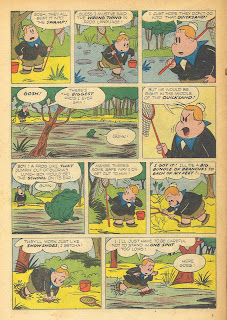 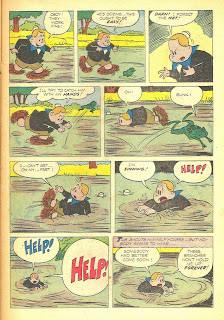 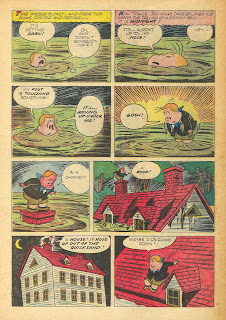 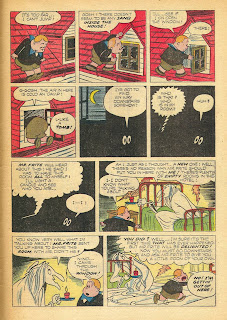 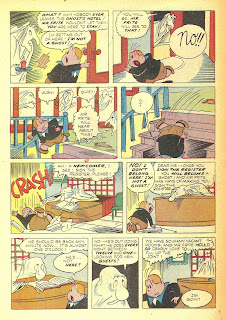 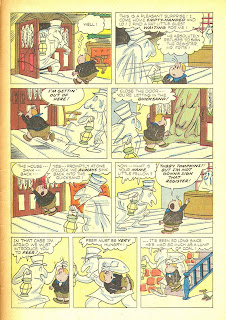 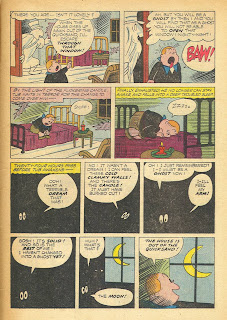 Frank, thanks for this great story; I love Stanley's macabre sense of humor. The funniest part for me, "I don't want to be changed into a ghost!" "It's worse being vaccinated!" Probably to a kid that's true.

What a great story with which to inaugurate your blog. I'll be checking back often.

Thank you, Pappy...your blog is one of my faves, so I'm very much grateful that you like mine!

Awesome Tubby story. One of the things I love most about Tubby's comics is the fact that the fantastic is never a dream, e.g., Sammi and the men from Mars stories. Whereas Lulu's flights into fantasy occur in her stories for Alvin and her dreams/nightmares, Tubby's are real.

I got Dark Horse's Tubby Vol 2 after reading this post ("for the kids" of course), and after reading the whole thing to the little ones, my son keeps coming back to this story and getting me to read it to him again!

You've really hit the nail on the head with this one!