My most recent John Stanley discovery is, thanks to the chatty format of the blog, literally remarkable.

In 1951, Dell revived the recently-deceased King Features entity KRAZY KAT. The strip's creator, the great George Herriman, had passed away seven years earlier, and his strip went with him. William Randolph Hearst was a great admirer of Herriman's work, and kept his strip in print, long after the intellectual set's 1920s adoration of it had waned. It was mostly an irritation to the Average Reader, who sought the calming blandness of Blondie, Winnie Winkle and other syndicated detritus.

Why anyone thought this esoteric, generally disliked-by-the-masses strip would make a promising Dell comic-for-the-masses is lost to time. Perhaps Stanley was a fan of the Herriman original. He'd had great success in translating other licensed properties to the comic book page. With Little Lulu, he was at the creative helm of one of the most popular monthly comic magazines in the US. Herriman's cast of characters, settings, and the basic love-triangle conceit of his strip were already strong stuff. It could be that Stanley sensed these elements would work in the funnybook format.

Stanley's Krazy was killed, presumably by poor sales, after five issues. He had just barely gotten his take on the characters when the book ended. The first issue contains some of the most random, blind groping of Stanley's career. By issue #4, he was getting into a good groove.

Reading these comics, one can sense that Stanley was right in bringing Herriman's ideas to the 1950s funnybook realm. Stanley jumped on the 'tics' of all the characters, exaggerated their virtues and flaws, and set up a template that could have continued for years.

In 1953/4, Dell's Krazy was revived for a few one-shot "Four Color" issues. The three I've read don't seem to be from Stanley's hand. Even given the experimental nature of the five 1951/2 issues, these later Krazys seem thuggish, derivative and dull.

Stanley wasn't the first to adapt Herriman's eccentric vision to another medium. Priorly, Krazy had been adapted as two long-running, highly variable cartoon series. A silent-era series, sponsored by Hearst, presents a watered-down, vaguely affectionate take on the strip, as it appeared in the 1910s and early '20s.

Pioneer animator John Bray took over the series in the early 1920s. The series' quality bettered, but eventually flagged. Another pioneer animation figure, Bill Nolan, took on the series, which was produced by Margaret Winkler and her husband, Charles Mintz.

Mintz essentially shanghaied the series, and took it to Columbia Pictures, where its lasted until 1939. In the early talkie era, the animated Krazy had some charm, if one can forgive the complete surrender of Herriman's concepts to a cheerful, peppy, blatant imitation of Mickey Mouse.

Meanwhile, the newspaper original grew increasingly quirkier. It must have heartily confused 1930s readers of the strip who first encountered the screen cartoon Krazy...

In 1951, Krazy Kat was hardly konspicious in its kommercial kharisma. In a bold move, Dell eschewed their usual try-out run in their "Four Color" one-shot series. They afforded Krazy his/her own book. Obviously, someone had faith in the idea.

Who better to write it than John Stanley? If Walt Kelly were not knee-deep in "Pogo" by this time, and if he were willing to take on a comic book feature not of his own creation, he might have done well with the denizens of Kokonino Kounty--themselves an obvious influence on his comics work.

Stanley was an obvious choice. His schedule was less full than it had been. The monthly Lulu was locked in place, and running in high gear. There was room for another series. Krazy was a quarterly book, as would be Stanley's next major title, Marge's Tubby [see previous post].

The transition from idiosyncratic cult newspaper strip to mass-market kiddie funnybook was not entirely smooth. Certain subtler elements of the strip are tucked into the background, and occasionally hinted at, but never boldly stated.

The characters' overall look is updated for post-war funny animal styles. Ignatz suffers the most, with his oversized ears and prehistoric Utilikilt [TM]. The felicitous, semi-surreal landscapes continue from Herriman's version, as do almost all of the supporting characters.

Stanley has a lot of fun with Krazy--now clearly tagged as a male. Krazy is a "Kandide" figure--a cheerful idiot savant. Things happen to him, and around him. He is occasionally sadistic (as a Stanley character must be, from time to time), but is mostly benign, a child of the universe who is protected from the worst of life's misfortunes.

Ignatz joins the ranks of Stanley's agitated outsiders, alongside Tubby Tompkins, Woody Woodpecker and Peterkin Pottle. Stanley clearly considers Ignatz the most interesting character. He instigates almost every narrative action in the five issues of Dell's Krazy Kat series, plus a handful of "Four Color" one-shots that occured a few years beyond this first brief run.

In this story, Ignatz is homeless and hungry in the snowy cold. His desire for comfortable homeowner Krazy's bowl of hot soup is the bridge for a classic Stanley confrontation.

I've gabbed enough for one rainy Saturday morning. I will post other stories from this short-lived, highly experimental series in the future. For now, here's a representative story for your enjoyment. 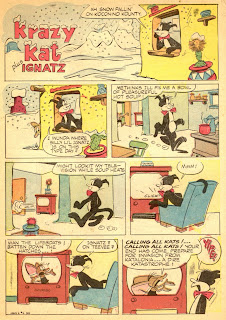 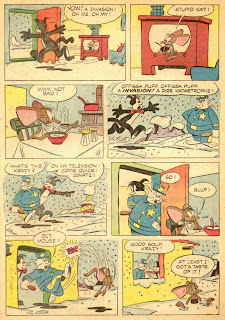 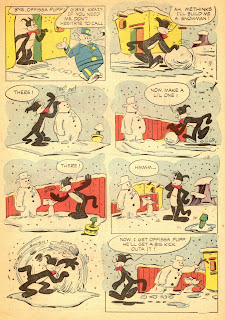 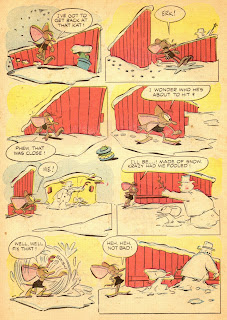 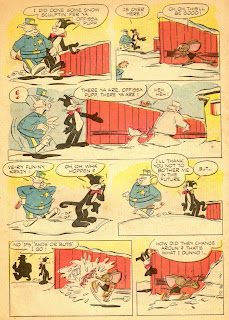 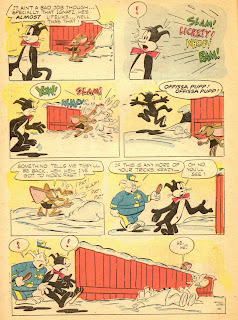 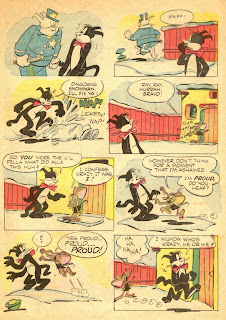 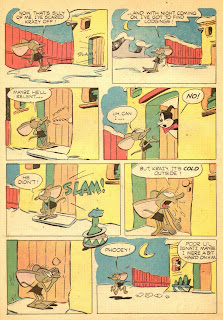 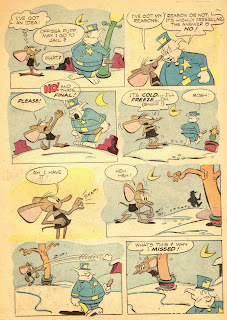 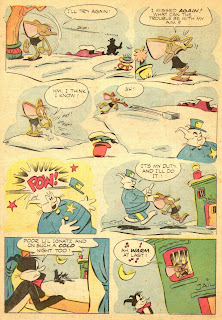