John Stanley despised the rich. He hated The Man. Wealth made people stupid, corrupt and evil. This message comes through, loud and clear, in dozens of his comics stories.

From Little Lulu's Wilbur and Nancy and Sluggo's Rollo to the various incidental bankers, antique lovers, art fanciers and big businessmen who incite many a story arc, the well-off are almost never seen in a good light in Stanley's world.

Their temperaments are callous, flippant, condescending and manipulative. They use their wealth to make the have-nots feel bad. Stanley's rich aggressively flaunts its wealth. They also care not what impact their lifestyle has on those around them.

The indifferent figure of wealth, ignoring or thwarting a poor or "average" person, is one of the central images in Stanley's work.

One wonders what happened in Stanley's life to embed this vicious blanket judgment in his psyche.

It wasn't just a handy plot element, as with Carl Barks' Uncle Scrooge. Barks seems pro-Scrooge, for the most part. When Scrooge acts thoughtlessly, he usually has a moment of self-awareness, and atones for what he has (or hasn't) done. His Scrooge is, ultimately, a good guy, even though it's difficult to read his stories these days without cringing at the miser duck's disdain for Earth's eco-system, the consequences of his actions, etc. etc. etc.

Stanley's rich have no conscience. They steamroller everyone and everything to get what they want--what, in their eyes, is their right as superior beings. Rarely, a wealthy Stanley character will be kind to others, usually for a "heart-warming" happy ending. Come their next appearance, all good will is vanished, and they're back to their There Will Be Blood-styled antics.

If Stanley ever spoke about his attitude towards the elite, it might help explain this long-term contempt. Stanley was born in 1914. He would have been a teenager during the Great Depression. Perhaps he suffered some hard knocks. Could be, his family suffered from a bank closure. It would be illuminating to better understand his grudge against wealth.

Stanley chose a profession that paid poorly. He could have written for movies, become a slick magazine cartoonist, or created a syndicated comic strip--and excelled at any of these tasks. Any one of these would have brought him financial and personal success on a level that funny-books could never offer. Comic books were a poverty-mentality industry in their "golden age." (They still are!)

It's known that Stanley had at least one gag cartoon published by The New Yorker. Despite an eye-straining series of sessions poring of the CD-ROM that contains all of that magazine's cartoons from the 1930s and '40s, I've failed to locate Stanley's work. I've had the cartoon described to me. I'd love to see it.

Why didn't Stanley have more cartoons published in The New Yorker? He'd gotten his foot in the door, and been deemed worthy of publication in that highest of cartoon markets.

Stanley was a fine cartoonist. Why didn't he pursue the creation of his own characters--and sign his name to his work? Aside from "Peterkin Pottle," Stanley created no original material for comics before the 1960s.

Why did Stanley exert so much of his creative effort towards licensed characters? He turned out more incisive, brilliant versions of others' properties for close to four decades. Only his interpretation of "Krazy Kat" falls short of the original--which is understandable.

There are a surplus of "why"s in Stanley's career. Without facts to answer those questions, they must remain unanswered. Perhaps some of these puzzles may be solved someday. Until then, we can only speculate.

Several New Funnies stories, such as the one you're about to read, milk the self-delusion and pretensions of the rich for down-to-earth laughs. A rather ordinary entry in the "Andy Panda" series, this early story focuses on the callow conformity and stupidity of affluent art admirers. (Uh oh, starting to sound like Basil Wolverton... m-must control alliteration...)

I don't agree with Stanley's notion that "maybe Aunt Priscilla was even better than Van Goo," to quote from the story you're about to read. There are great artists--and rotten ones--everywhere, on every level. To simply dismiss all fine art as nonsense is anhedonic. It cuts one off from the beauty of human expression.

Stanley wasn't alone in his philosophy. It was, in fact, a staple of pop-culture in the 1930s and '40s. From the sublimities of W. C. Fields' It's A Gift to the virile low comedy of The Three Stooges, mainstream assaults on the "smart set" were as common as the fear-stupified Negro or the genial, ruddy-faced Irish cop in movies, books, radio shows, fiction and comic strips.

In these lighter concoctions, the rich aren't sinister--just stupid and pretentious. They're one of many targets for the "average guy" to mock: "If that's wealth, I'll take vanilla!"

Stanley would issue his first venomous attack on the wealthy elite in a "Four-Color" Oswald Rabbit story, "The Sinister Six," which I intend to present here next. I'll bite my tongue, as there is much to say about that lengthy, pitch-dark piece.

The first page of this story looks very nice. Dell used the inside front cover to start stories, and both sides of the back cover to end them. Wartime paper shortages, and fluctating page counts, inspired this thrift. The few pages that were printed on slick paper, like this one, makes me wish they'd been able to use a better grade of paper on all their comics. It's downright lovely!

In-Joke Dept.: Please note that one of the policemen is named Gormley. 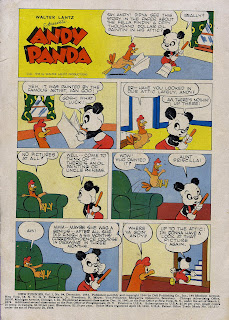 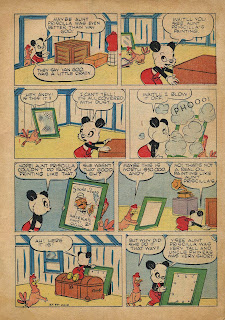 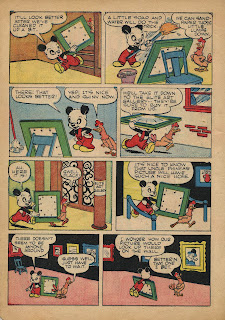 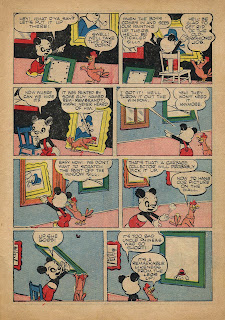 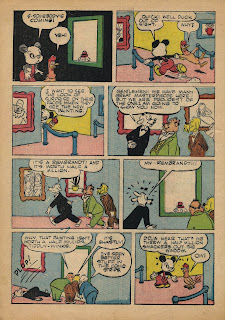 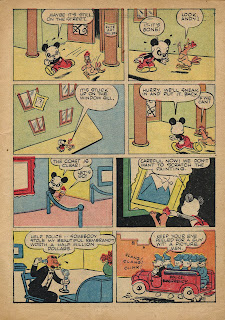 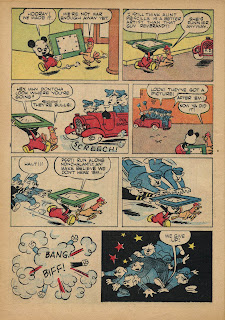 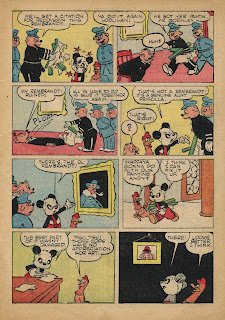