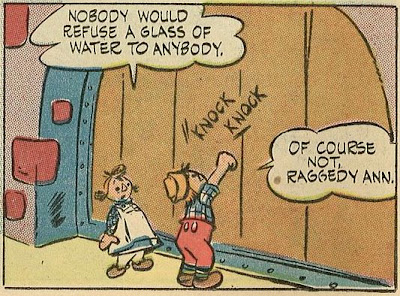 Thanks to Maggie Thompson for IDing this story, way back in 1975, in issue 16 of Michael Barrier's Funnyworld magazine.

I thought this had to be a Stanley effort when I read it recently. It follows the "Peterkin Pottle" story, posted here earlier this month, that led off issue 38 of Raggedy Ann and Andy.

Stanley shifts gears, in the wake of Pottle's heart-breaking escape from grim reality. His take on the world-famous interactive aggregations of fabric scraps is reminiscent of a contemporary series in Stanley's flagship project, the monthly Little Lulu magazine.

Each issue of Lulu features a loose, absurdly humorous and often dark "fractured fairy tale," as told by Little Lulu to her neighbor, Alvin. These stories often emerge under duress, to appease bratty Alvin's boredom or anti-social behavior.

John Stanley's brilliance as a storyteller and "idea man" never shone brighter than in these clockwork doses of genre revisionism. It remains one of the most impressive bodies of work in American comics.

These pieces operate on two levels: as tongue-in-cheek genre parodies, with Lulu always in the protagonist's role, and as a reactive, reflexive character; and as genuinely well-conceived, substantial, satisfying narratives.

This "Raggedy Ann" story, while much more casual in execution, is analagous to Lulu's stories-to-Alvin. The main difference is that there's no narrator, and thus no framework. The story happens in the comic-book here and now.

The two living dolls ramble into a quiet existential hell--a highly symbolic castle not easily exited. It's a scenario worthy of mini-comix legend Steve Willis. The loose, spontaneous and quite pleasing artwork strongly shows Stanley's hand--in the layouts, if not in the finishes.

It's quite possible Stanley may have written other Raggedy Ann stories for the later issues of their anthology comic. If I can track them down, I'll share them with you here. For now, enjoy this understated but brilliant free-form fairy tale.

A comparison of John Stanley to Steve Willis? Well, that's not something you see every day!

Thanks for posting this interesting story. Stanley sometimes used a theme about children being places they shouldn't, that they get in trouble. The good thing is that they use their own wits--or have some fortuitous circumstance arise--to get out.

The situation presented here is out of a nightmare: wandering around in limbo, in futility, with an old man who has been there for "hundreds of years". Why has he been there? Why is a rag doll thirsty and need water? I guess you could pick Stanley to pieces on such things when he was aiming for entertainment, but there are layers to stories like these that say something about the artist.

I used to get slightly creeped out by stories like this when I was a kid. I didn't know they were by Stanley, I just knew they made me squirm. It's probably the theme of the trap or being lost. Brrrr. A kid's nightmare!