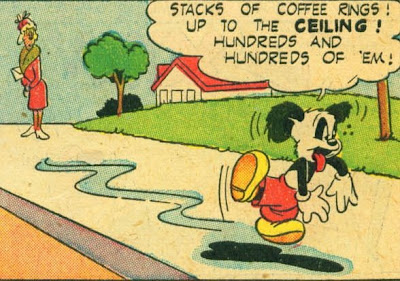 I had today's original story choice all ready to go--or so I thought. I'd forgotten to scan one page out of a long story. @#!%#@$!@#, if I may curse funnybook-style!

I had this amusing "Andy Panda" story as a possible Plan B, so here comes that rainy day! (Here in Seattle, it is NOT raining this morning. It poured non-stop yesterday.)

This is a typical entry in Stanley's entertaining-enough stint on New Funnies. Stanley wrote for the title for 4.5 years, and racked up, I'd estimate, 400 to 500 pages of work. Not all of it is world-class. Some of it ranks with his best work. It is a consistently likable and colorful chapter in John Stanley's career.

Via the characters of Woody Woodpecker and Charlie Chicken (from "Andy Panda"), Stanley developed the personality template for Tubby Tompkins, anti-hero of the Little Lulu comics. New Funnies also endowed Stanley with the ability to reel off variants on familiar plot devices and story formats.

Here is an amusing Stanley screwball-comedy. It has a classic screwball structure: one small misunderstanding snowballs into an avalanche of confusion, fueled by gossiping spinsters and "nosy parkers."

Stanley shoves one of his sinister hulking characters into the mix, just for fun. He also gives a typically descriptive name to the story's main character, Mrs. Munchbun.

Her neurotic, obsessive-compulsive devotion to her dead spouse is both touching and hilarious. (Our teaser panel hints at the manifestation of Munchbun's OCD memorial.)

Stanley was not writing for tots with stories such as this. Most of the humor in this piece would soar over a 9 year-old's head like a stealth bomber at midnight. Or, perhaps, the average 9 year-old, circa 1947, was a hell of a lot smarter than anyone would like to admit!

I hope that, somewhere, someday, the identities of the artists who rendered these stories will come to light. This cartoonist did many pieces for New Funnies. He has a pleasantly spiky, expressive workmanlike style. I don't think it is Irving Tripp or Dan Gormley. It could not be Dan Noonan. This artist did a lot of work for the East Coast division of Dell Comics. There must be records of the Dell artists somewhere...

While this mystery remains unsolved, please enjoy this amusin' but confusin' Stanley story!

NOTE: I somehow neglected to post the final page to this story when I first created this entry. Thanks for noticing this, Chris Riesbeck! Today is Missing Page Day here at Stanley Stories... my apologies to anyone who tried to read this story before its final page was belatedly slapped into place!
Posted by Frank M. Young at 9:03 AM

I feel like it must be still missing a page... that ending is insane!

Your comment made me laugh out loud...it's funny 'cause it's true! Thank you!

I haven't checked in for awhile (the air is being let out of the blog balloon for me, as evidenced by lack of content at my own). I actually have this story! It always struck me as one of Stanley's weaker ones. I love random, insane endings when they go to the limit, but it seems like Stanley was just being random for randomness's sake. Good art though!

Frank, you are lucky you are not active in 16mm buying anymore. A Fleischer Screen Song cleared $340 the other day. They're great, but who the fugg has that much money to throw at one? Fools.