"What a Caricature He Is!"--John Stanley at the Fleischer Studios, 1935

I believe that Stanley mentioned his employment at the Max Fleischer animation studios in New York City in the mid-1930s. Well, here's visible proof of his presence, from an issue of Fleischer's Animated News [Vol. 1 #6, May 1935].

Those of us with access to Another Rainbow's flawed-but-beloved Little Lulu Library will recall that some Stanley-drawn caricatures, from our man's high school yearbook, were reproduced.

The image below reminds me of the days, lo, some 30 years ago, when I discovered, in the musty bowels of Strozier Library, at Florida State University, a complete run of Fleischer's Animated News on microfilm.

I pored over those reels, but never took notes (hey, I was a teenager at the time!). I wonder if those microfilms are still there. If they've not degraded, I urge any Northern Florida-based Stanley Stories readers to go into the library's basement and request those three or four boxes of reels.

This is very likely reproduced from microfilm. Fleischer's Animated News was hectographed, and I'm guessing that the artists who did the illustrations drew their stuff directly on the hectograph masters. 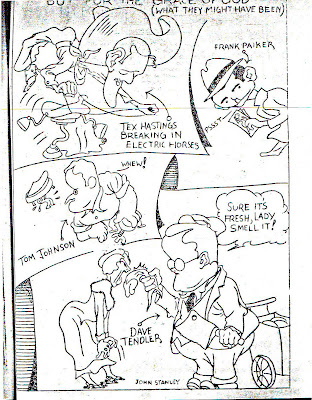 These are great caricatures. I especially like Tom Johnson's, which looks like a sinister type, as envisioned by Gluyas Williams.

Tendlar and Johnson stayed with the studio for decades, long after Fleischer became Famous Studios, and ushered in an era of baroque violence and cartoons that, in their own way, are every bit as bizarre and unsettling as the pre-Code output of the Fleischer concern.

I would wager that there are more John Stanley pieces in other issues of FAN. Were that I was not thousands of miles (and, metaphorically, thousands of years) from dear old Tallahassee, I'd be the first in line to hunch over the microfilm viewer, in the air-conditioned darkness, and pore over this faskinatin' publication.

As said: any FSU readers of this blog? If so, care to make a research trip to Strozier Library? Drop me a line--let's talk!
Posted by Frank M. Young at 8:12 AM

Thanks so much for sharing this gem, Frank!
Honest!

Frank,
Worldcat shows that both Florida and the New-York Historical Society have a set on microfilm, but that's all!