Today's offering was kindly scanned and donated by Alan Hutchinson. He, in fact, took the considerable trouble to scan this entire 52-page funnybook, the contents of which have eluded me for years... (read last few words with Peter Lorre-style intensity).

I've posted few of Stanley's "Oswald the Rabbit" stories here. Though it was a secondary series for him, during his five year tenure on New Funnies, he wrote several very good to near-brilliant episodes. This is one of the best in the run.

John Stanley's stories with a magician as its Terrible Thwarter/Obstacle figure summon their creator's most outre leaps and bounds of narrative imagination. Stanley's magicians are often heroes, and sometimes utter dastards. They are the envy and the enemy of Stanley's protagonists--and especially revered figures to his many "Tubby Types."

Here, Stanley's prestidigitator has an unusually ambitious act, which seems to often render him injured and/or conscious. His own tricks quickly exceed his ability to control them. His unfinished feat of illusion leaves an absurd but considerable rift in the Oswald/Toby relationship, as you'll soon see... 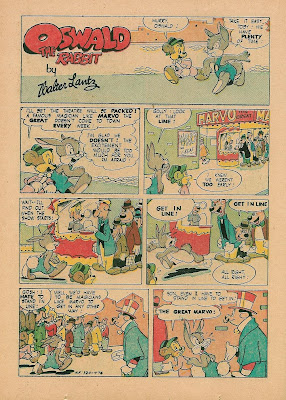 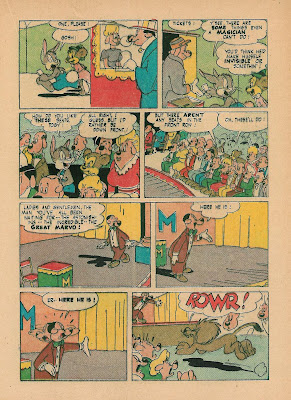 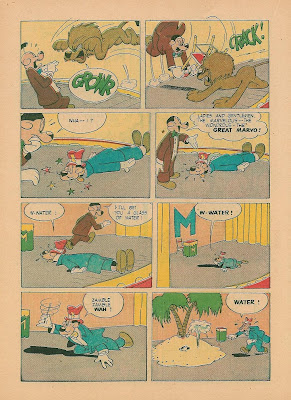 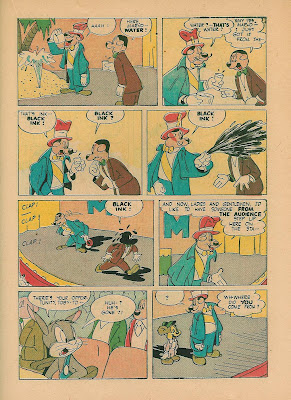 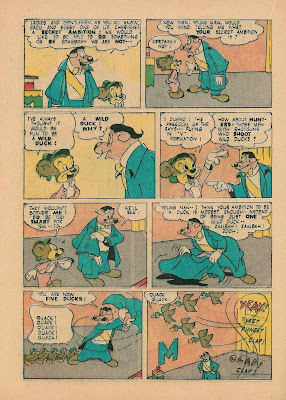 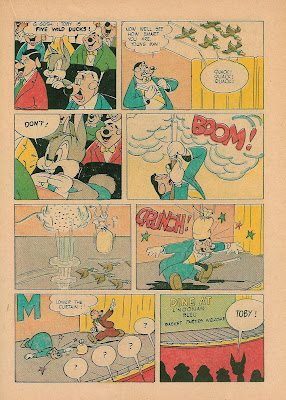 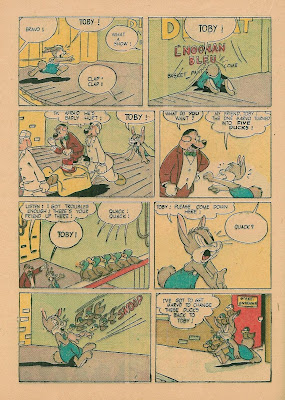 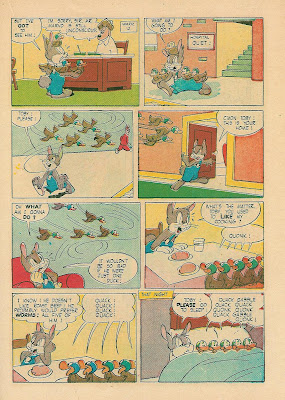 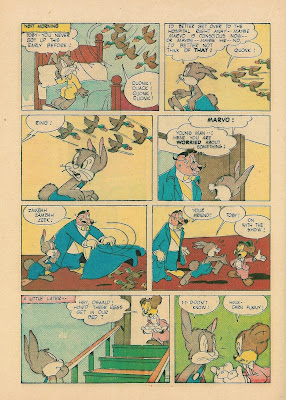 Stanley's fantasy-themed stories frequently end on a mind-fudge. The boundaries and "what if"s become blurred and uncertain. This 1947 story offers one of his best "?!?" conclusions.

Oswald is remarkably flexible throughout this crisis. His companion, once a cuddly li'l bear, becomes five separate ducks. He still attempts to carry on the domestic life he's known with this entity. Once converted to a flock of ducks, Toby remains Oswald's friend, but his collectively fowl behavior makes their continued union unfeasible.

Marvo The Great is, apparently, omnipotent. Yet he is highly vulnerable to his own tricks. His entrance as a wild lion earns him a mild concussion. After Toby's transformation, he produces a shotgun and attempts to shoot the ducks--resulting in his comatose condition. (It's chilling to consider that Marvo intends to murder Toby, just for the finale to a grand trick!)

Marvo does deliver the goods. He gives his eager subject, Toby, exactly what he requests. Toby's reply to Marvo's "why a duck" question is hilarious: "I dunno: the freedom of the skys [sic] --flying in "V" formation!"

The story ends on an off-beat--another distinctive "Stanleyism." In this story's case, it's like a piece of music that has one extra measure at the end. (It might continue further, with the duo making an omelet out of the eggs.)

Stanley wrings a great deal of comedy out of the story's events--from the mass-mind of the excited mob awaiting admittance to Marvo's performance, to Marvo paying admission to his own show, to his ill-fated entrance as a wild lion... almost every panel has some kind of pay-off of character-based or situational comedy.

Note the in-joke on the theater's asbestos curtain. "L' Noonan Bleu" is, of course, a tip of the hat to fellow Western staffer Dan Noonan, whose elegant cartooning graced many of the Oskar Lebeck-edited Dell titles of the period.

I'm not certain that Noonan and Stanley ever did a story together. I believe the art, here, is by Dan Gormley. I think Noonan must have written his own material, or only collaborated with Walt Kelly.

My friend and fellow blogologist Paul Tumey recalls seeing a small-press book on the history of Dell Publications many years ago. We've both tried, in vain, to find it. I wonder if said book might have at least some information on Oskar Lebeck's editorial work for Western Publications.

For such an important stable of cartooning talent, Western's story is fuzzy, at best. I wish it were even half as well documented as are the 1940s histories of DC, Marvel, Fawcett, et al. We're fortunate that the stories exist, and that they have, if anything, improved with time.
Posted by Frank M. Young at 11:33 AM

This is one of the funniest comic book stories I've ever read! A great find! Thank you to the kind gent who scanned his copy and and to you Frank for sharing it with the world. In my opinion, this story belongs in the 'Top 10" great Stanley non-Lulu stories.