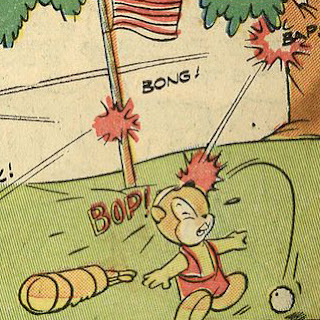 John Stanley's early comics efforts give us a fascinating window into the development of a gifted storyteller. His 1942-1947 work, in which he developed an unmistakable approach to comics narrative, has its ups and downs.

Until Little Lulu came into his life, in 1945, Stanley simply didn't have material--or characters--that gave him room for growth. He achieved brilliant moments in his early "Tom and Jerry" and "Woody Woodpecker" stories, to be sure. One has to look no further than this story, or the final story in this mega-post, to see evidence of his early raw skill as a storyteller.

Stanley, by his own admission, simply made up his stories as he wrote. By 1949, he was so tuned into his cast of Little Lulu that he could generate stories via this method with seeming lack of effort.

In taking on Little Lulu, Stanley tamped down his more antic tendencies. His work of 1945 and 1950 is like night and day. The wild qualities of '45 are completely subdued in '50. This restraint reaped him long-term benefits. At its best, Stanley's Little Lulu is writing of literary quality. It is all things to all readers.

Children enjoy the stories as spirited tales of comic one-upmanship that also advocate for the intelligence and determination of their demographic. Adults can groove to the deeply wrought characterizations, the compulsions and ethics (or lack thereof) of the series' cast members, and on Stanley's sheer wit as a comedian and storyteller.

Though Stanley sacrificed his heartier tendencies as a comedian to establish the world of Little Lulu, by the mid-1950s, he was once again in touch with his more hard-edged comedy.

After a transitory period, in which his work tends to be shrill, with less attention paid to character, Stanley rebounded at the dawn of the 1960s. His late masterwork, Thirteen Going on Eighteen, weds the brassy slapstick of his earliest work with the fine attention to characterization that so distinguished Little Lulu.

One of Stanley's favored formulas was the ODTAA scenario. This stands for One Damned Thing After Another, and is the bedrock of improvisational comedy. One seemingly insignificant action causes a reaction, and soon a snowball of narrative rolls and rumbles to a (ideally) high-impact conclusion. It's a fine venue for comedic writing--if the author doesn't anticipate the chain of events, it will likely be refreshing for his audience.

Stanley wasn't alone in his embrace of the ODTAA scenario. Carl Barks, a far more methodical, cautious storyteller, used this template for many of his monthly, 10-page "Donald Duck" stories of the 1940s and '50s.

To a risk-taking author like Stanley, the ODTAA style could occasionally result in a mis-fire. In his early comics work, Stanley's stories sometimes miss opportunities, and sometimes write themselves into a corner, which results in an abrupt or weak conclusion.

Comic-book writing was a paid schoolroom. There was not time to dote upon work, or study it in reflection. The next month's stories were due, and the next month's after that...

Today's offerings are two examples of this on-the-fly storytelling. While neither of them are great stories, they show Stanley in his development as mainstream comics' finest writer. His embrace of the ODTAA method is cheerfully evident.

In today's first story, from New Funnies #95, written in late 1944, the seemingly innocent purchase of a box of popcorn leads to adventure, persecution and transcendence for Andy Panda and his fowl friend, Charlie. 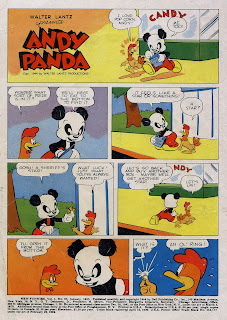 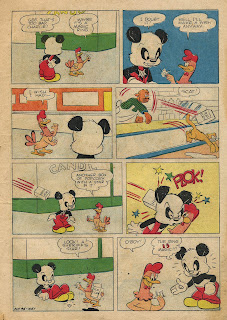 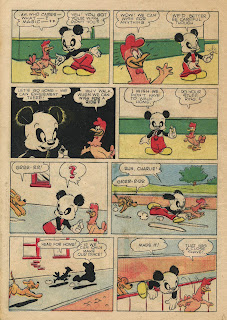 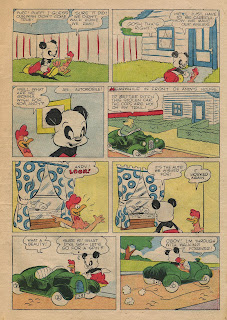 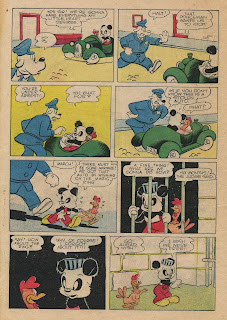 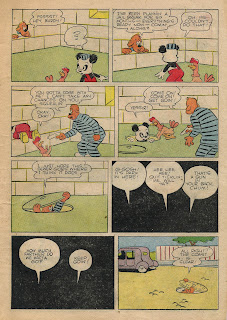 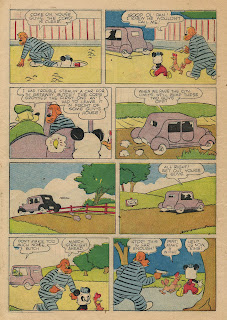 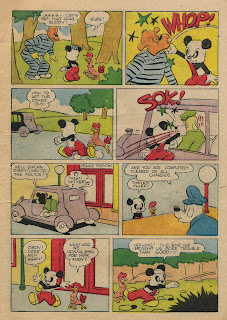 Stanley is at his most Barksian here. Like Barks, Stanley sought to debunk fairy-tales and wishful thinking. Although Andy is wise to chuck the "magic ring" at story's end, it's most likely that the chain of events in this story would have happened to he and Charlie regardless.

By the purchase of a box of popcorn, Andy and Charlie become playthings of fate. Fate gives them good breaks and bad. In a precursor to Stanley's comics noir, "Little Lulu is Taken for a Ride," the childish animals come close to meeting their maker.

In the story's hasty, somewhat sloppy conclusion, Stanley ties up loose ends just in time. With another page or two, Stanley could have wrapped up this chain of coincidences in far more satisfying fashion.

Today's second feature is from Our Gang Comics #12, cover-dated July-August 1944. This slightly earlier story blends the ODTAA style with one of Stanley's most persistent motifs--wealthy characters who use their money to manipulate and harm others. 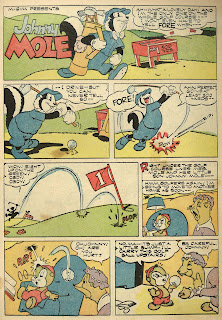 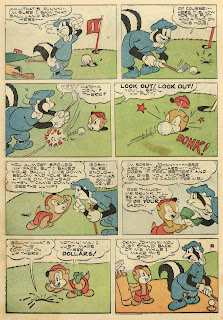 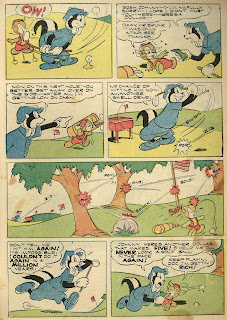 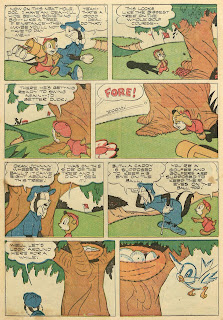 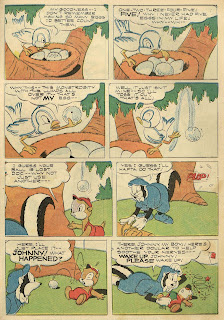 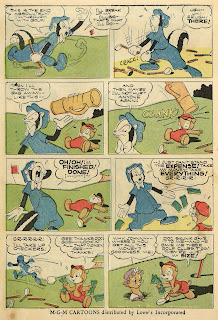 Mr. Skunk's belief that money solves all problems--and Johnny's eager buy-in on this little cognitive bias--distinguishes this filler story. Every payment Johnny receives invites more physical abuse. Mr. Skunk's guilt is temporary at best, and salved by a cash payout. While he is aware that he has hurt Johnny, he dodges any responsibility via his wallet.

This arrogant, self-centered (dare I say, Tubby-like) attitude bankrupts him, and causes him to abandon this leisure game of the rich. Though battered and abused, Johnny Mole considers himself the winner of this encounter. He has a fistful of dollars and golf clubs, broken in rage, by Mr. Skunk, that are "just my size!"

This comedy of cause and effect would serve Stanley well in his finest years on Little Lulu. As well, it fuels later notable works such as Dunc 'n' Loo, Nancy and Sluggo and Thirteen Going on Eighteen. In dues-paying early work, such as these two pieces, John Stanley learned on the job, and developed skills that soon paid off handsomely.
Posted by Frank M. Young at 12:20 PM

Interestingly, Dr. Skunk is in Johnny's one cartoon appearance, too:

Rather confusingly, he treats Johnny like a sucker and seems to pick his pocket—but only gets a quarter, and leaves Johnny glasses that definitely work as promised.

The Andy story was good, but wow, I'm glad I read that Johnny Mole story! Usually I avoid anything having to do with Harman and Ising's time at MGM, but Stanley sure was ahead of his time with this yarn.

A big hulky man who abuses a child and pays hush money is overcome with remorse and disgust at his abuse and freespending, all while the kid enjoys it? In 1944?! This is definitely a diamond amongst filth and I thank you for sharing it, Frank.

Thanks for your astute words, Thad. Stanley's darkness is so often balled up inside a seemingly innocuous premise... it just kinda hits you as you read. Stanley was not afraid to be "wrong," and perhaps he wasn't aware of the wrongness in some of his stories.

Some of this "wrongness" was common wisdom of mid-century America--e.g., the parade of spanking scenes in LITTLE LULU.

But every so often, he strayed into what can only be called child abuse--this story, the Tubby story "Hide and Seek," "Little Lulu is Taken for a Ride," and some of the stories with the truant officer, McNabbem.

Hmm... I think this is a good start for another post. And just when I thought I'd run out of ideas. Again, sir, I thank you!