O. G. Whiz was John Stanley's last original work for comics. This may, in fact, be the very last comics work he did for publication. Very late in his life, Stanley sketch-scripted a couple of "Little Lulu" pages for the fan publication The HoLLywood Eclectern. They were finished by fan artist Larry Blake.

Stanley didn't do the finished art, but his hand is strongly evident in the character designs, layouts and body language of characters. He did draw the cover, with some assistance. It looks like a Gold Key staffer touched up the O.G. Whiz figure to make it smoother and more "commercial." The frogs and the startled secretary are in the loose brush style Stanley used on his 1960s comics: 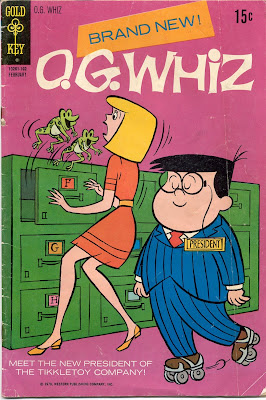 This may be Stanley's talkiest comics work. His dialogue became heavier and more percussive throughout the 1960s, but never were his comix this verbose. It's witty, lively talk, with a touch of sitcom shrillness. These stories, in fact, have an unusual mix of visual and verbal humor.

Stanley was certainly not out of ideas, this late in the game. The series' premise is simple but clever. Stanley did favor certain physical types. The 140-something Titus Tootle Tikkle looks like the witch/teacher from Melvin Monster, without a wig. Thutnose, O. G. Whiz' rival, bears a strong resemblance to "Baddy" from Melvin Monster and the menacing Buddy from Dunc 'n' Loo.

And, finally, O. G. Whiz is a plumper Melvin Monster with Caucasian skin and specs.

Stanley's last comix work reminds me of Jacques Tati's final narrative film, Trafic, which was also released in 1971. I doubt Stanley saw that movie, but the corporate setting, inventive humor, and gadgetry have some vague thematic link to Tati's under-appreciated film.

Here are the first two O. G. Whiz stories: "Orvie's Rapid Rises," which functions as an origin story, and "The Bubblegum Bogeyman," which sets up the dysfunctional relationship of jealous executive Thutnose and de facto authority-figure Whiz. Their personal dynamic is similar to McOnion's and Sluggo's in the Stanley Nancy comix.

The printing on this comic book, typical of 1970s Gold Key product, is wretched. By this time, plastic plates were used at the press. These held ink poorly, and delivered a fuzzy, grungy quality to both linework and color.

I've gone through four copies of this comic, in a vain attempt to find one that's decently printed. They probably don't exist. It's sad that Stanley's final published work was given such shabby treatment. But, of course, no one, not even John Stanley, could have known this was it.

O. G. Whiz continued for a year without Stanley. It was then revived for a little over a year in 1978. Apparently, something happened during or after the publication of this first issue that caused Stanley to leave comics for good. Whatever the story is (and I hope it comes to light someday), Stanley left comix with a decided, brassy BANG--not a whimper.

This is a revealing moment!
I ever thought Stanley wrote about all the series. Honestly, I've just read some O.G. issues (none of them was #1) and the stories look lame to me, the plot went to pieces as I read it. I didn't find out any of Stanley's features in those stories. Well, I'm not very well up on Stanley's history and works (it's quite obvious), but it was the first time I get bored reading a Stanley's story. Now I know why!
Thanks for sharing these ones (and bringing this info to light).
All best-

thanks these were a hoot

...I have often thought that the OGW series arose from a Gold Key desire to clone Richie Rich ! However , unlike RR , who you had to be born as , you could hope to rise to be O. G. !!! Thank you . :-)
I have wondered why , with Stanley's name apparently golden , there hasn't be3n reprints of OGW .