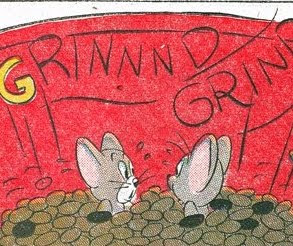 Thanks to Doug Gray for these scans. Doug has a nice comix-related blog that you can visit at http://greatestape.blogspot.com/

He is, obviously, a fella of good taste. He responded to my plea for missing issues of Our Gang with possible Stanley content.

His offering is an especially gnarly "Tom & Jerry" entry. Stanley did the finishes on this story's artwork. It looks less precise--and more rushed--than usual, but it has his tell-tale artistic tics.

As usual, the mice set themselves up for ODTAA by leaving their safe zone and exploring the big, confusing world about them. A potential sailing mishap leads them to a delicatessen around the corner from their "residence." Here is where much of the food and dry goods they've pilfered were purchased.

This is a wartime story. I'm fascinated to see how readily available coffee beans were at this imaginary deli. Perhaps this was wishful thinking on Stanley's part. The coffee bean grinder plays a major role in this story. Our rodent pals nearly meet a Herschell Gordon Lewis-style finale inside the deadly bean machine.

Later, it is their deus ex machina that returns them to the world they know, via the arms of stereotyped black maid Mandy.

Note how much more sympathetic and human a character she is here, compared to the equivalent character in the MGM cartoons. Note, as well, the apparently German deli owner. I guess he was one of the "good Germans." Mandy is treated courteously and warmly by the deli guy.

One final note: the inker and/or letterer get the mice mixed-up on the first page. A magically diaperless Tuffy addresses a suddenly diaper-endowed Jerry in the fifth panel. They switch back in the next frame. Editor Oskar Lebeck must have missed that little gaffe when he scrutinized these pages. 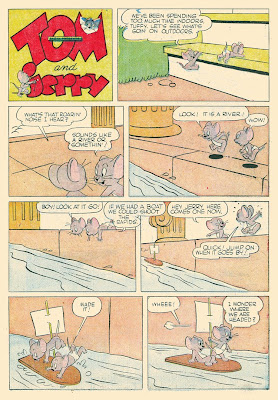 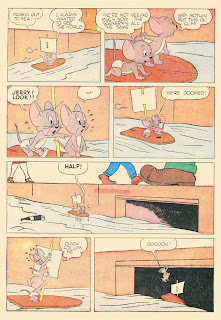 2011 Post-Script: It's clear to me, now, that this story is illustrated by John Stanley. The inking is unusually loose for him, but it's certainly his work as a cartoonist/writer.

Another thing: why is this particular post so darned popular? I'm happy for its success, but I obviously don't see something here that a lot of other people see--and get.
Posted by Frank M. Young at 10:48 AM

Labels: dangerous food, Our Gang Comics, Stanley as cartoonist-writer, Stanley in the 1940s, Tom And Jerry