Hi all. Here is the third "Andy Panda" story by John Stanley. At this stage, he is still learning how to utilize the still-new comic book format.
Nonetheless, there is something distinctive--and border-line creepy--about this story. A dry sense of humor lurks right beneath the simple surface.

To boot, this may be Stanley's earliest story with a fantasy-fairytale angle. Already, a sense of the sinister aligns itself with fantastic subject-matter.

The story's dissolution into was-it-a-dream-or-not, at the end, sets up another familiar Stanley story theme. He leaned on this motif regularly, throughout his career.

Indeed, the first story posted here, "The Guest in the Ghost Hotel," pushes that uncertainty to its limits. It's most interesting to see an early usage here.

Notice that the snowman and snowdog turn pink for one page. As well, both Charlie Chicken and a fire become a muddled fecal green-brown. Oops! Someone mixed up the color separations! This gaffe only enhances the story's curious qualities.

Stanley's resistance to the use of punctuation marks is another distinguishing "tell" of his early work. He later went to the... opposite... extreme -- using! such! effects! to the max...

I'm a big fan of his wild usage of ellipses, bold type, and other visual-verbal kicks in his late '50s and '60s work. It really helps the reader "hear" the stories' intended emotional and tonal inflections. The blank-verse approach of the early Stanley stories is a curious thing. As said, it helps distinguish his lesser stories from the works of other creators.

No masterpiece today--but for its themes and approach, this story has a lot to offer the John Stanley enthusiast. 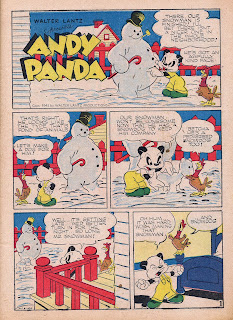 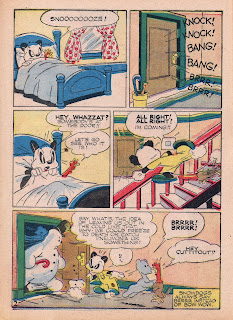 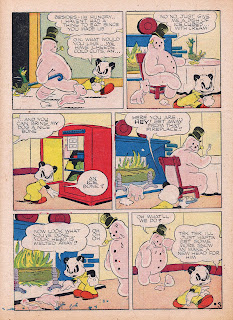 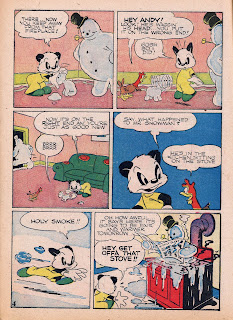 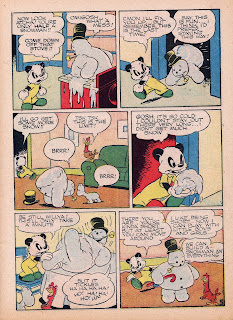 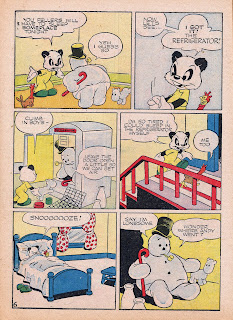 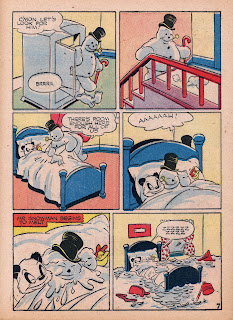 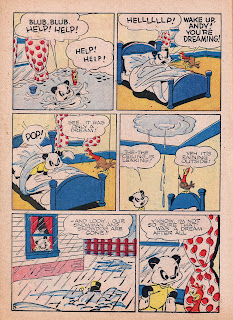 Wonderful, I hadn't read that one before. Do you have NEW FUNNIES #80? I'm trying to determine Charlie Chicken's incredible growth that Stanley initiated. In NF #79 Charlie was introduced as a thuggish hatchling... two issues later he's a rooster! Just as Splinter's sex changed from male to female over the course of two issues... Only in the Lantz comic universe.

Hi Thad!
Thanks for your comments. I do indeed have issue 80 of NEW FUNNIES. I intend to scan and post the Andy Panda story therein.

My copy is in such beautiful condition that I'm actually reluctant to place it on a flatbed scanner...

I hadn't noticed that Charlie grows during the first three stories. Thanks for enlightening that--it's an unusual thing to see happen in a funnybook.