This link will take you to the latest installment at Doug Gray's always-fun blog, The Greatest Ape. Its title reminds me of my own childhood misunderstandings of movie and TV show titles. This often led to impossible and unfulfillable expectations... discovering that the movie is not about a gigantic simian, but just a Steve McQueen prison-break movie...

Herein, Doug has kindly scanned and provided the entirety of a curious 1969 Gold Key one-shot funnybook written and laid out by our man John... 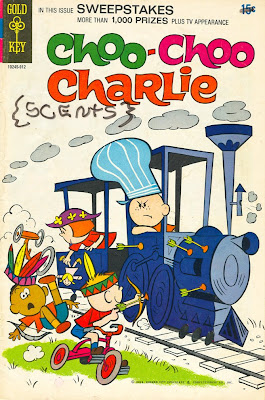 I have never seen nor read this particular funnybook. It's been at the top of my Stanley wish-list for awhile. It's a happy coincidence that Doug so kindly chose to post this comic.

As he mentions in his post, it's become annoyingly expensive on the ever-accursed "collector's market." To be fair, it is probably pretty rare.

Doug also provides info on the character's shameless public identity--as a hawker of candy-coated pseudo-licorice snack-treat Good 'n' Plenty. To my knowledge, this is John Stanley's only comic book based on a corporate shill.

Come to think of it, Little Lulu's long association with Kleenex tissue might also count; she was peddling these ersatz snotrags at the time her Dell title first appeared.

While you're at The Greatest Ape, check out the other cool posts, including a plethora of Dick Briefer Frankenstein stories from the mid-1940s.

Thanks, Doug... and double thanks for kindly allowing me to hitch a ride on your wagon this week. I'd begun to feel guilty about my poor showing on this blog. This is, at least, a point to something of interest.

I look forward to reading these seldom-seen Stanley stories myself!
Posted by Frank M. Young at 11:12 AM

The oddest thing about the fact that this is a comic about a candy mascot is the fact that there is zero product placement. No mention of Good & Plenty anywhere in the stories, and no ads for it either. There is an ad for Tootsie Rolls on the back cover, but that was a competitor's product.

Except for the origin of the character not having faded completely from memory, this would just seem like a whimsical kids' comic about a boy with his own train.