Remember "The Secret Six," the intense, ultra-dark Oswald Rabbit story from 1945? (It was posted here last year--well worth the effort to locate, if you've got the time.)

Here is its twin--one of John Stanley's final "Four Color" books featuring the Walter Lantz characters. "The Mighty Mites," from late 1948, is devoid of all but the darkest, dryest black humor. 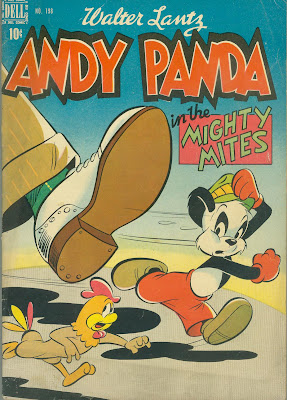 Loaded with Stanley "tells"--floating eyes in blackness, morbid themes (including a jaw-droppingly grim finale, made all the darker for its casual, conversational delivery), ZAZzes galore, windmill action, SFX in speech balloons--"Mighty Mites" may qualify as the darkest Stanley Story of the 1940s.

Grim as "The Secret Six" is, it's leavened with light comedy, and trades on the sexual ambiguity of Oswald Rabbit and his domestic partner, Toby Bear.

Fellow dompars Andy Panda and Charlie Chicken have no time for comedy in this breathless, EC-like intense story of a mad scientist, living alone in a rambling house out in the middle of nowhere.

It starts on a dark and stormy night... well, take 15 minutes and just read this thing. Then we'll talk...

Morgan is one hell of a disturbing villain. He has no motivation for his actions. Sure, one of his victims mentions that Morgan wants to be "king of the world," but his scheme of shrinking every being on the planet to "four inches--or SMALLER!" would take several lifetimes. There would have to be chartered busses bringing large groups of people around the clock, for years and years, for Morgan to attain his dark goal.

What chain of events led him to (a) develop the shrink-ray and (b) lure unsuspecting chumps into his remote forest home, whereupon he (c) shrinks them and collects them in bird cages while (d) actually believing he can rule the entire world?

In the best tradition of sociopathy, Morgan's outward persona is bland, ineffectual and even cordial. Although everything about his homestead screams WARNING! PSYCHOTIC LOSER! AM-SCRAY!, etc., his apparent affable, cheery facade disarms his victims.

This isn't the first time Stanley has invested the villain of a story with more interest than its alleged heroes. In this case, bland, low-key Andy and Charlie are, initially, evenly matched in the vanilla personality of Morgan.

A repeated nightmare image in Stanley's work involves a commonplace item--a bed, a house--sinking into the ground. (Check out the first story I ever posted here, "The Guest in the Ghost Hotel," from Tubby #7, for another vivid rendition of this theme.)

Morgan's house, filled with retracting panels, secret passages, and even a light rail line, is clearly a labor of insane love. One can imagine the years it took this guy to design and build this nightmare castle out in the sticks.

A stronger pair of protagonists might upstage a bad guy like Morgan. It is to this story's benefit that panda and chicken are so lackluster and ordinary. As the evident madness of Morgan's world slowly dawns on our heroes, a deeply disturbing facet of Morgan surfaces.

It isn't just that he traps people and shrinks and collects them--he takes out his rage on them. "He'll TORTURE us--he always does when he's angry," as one of Morgan's early victims exclaims, after Andy and Charlie shoot him in the big toe with his own gun.

Just enough is said to fill the reader's mind with the many sessions of torment the little people have endured before the time-frame of this story. Brrr!

"The Mighty Mites," from its misleading title onward, lacks many specific details. An obvious twin to this story is Carl Barks' "The Terror of the River," from 1946. Barks' story also has a sociopathic villain with elaborate equipment, for the express goal of scaring the daylights out of people.

Barks' story is full of down-to-earth anecdotes and experiences--of life on a riverboat, of the atmosphere of the water and the night, and of the foibles of funny-animal "humanity."

Stanley, by not crossing Ts or dotting Is, creates an inescapable, relentless state of nightmare in "The Mighty Mites." Nothing has much meaning--as in a bad dream, events just happen, and the protagonist bobbles in the wake of these random actions.

As is proper in the mad-scientist genre, the creator's evil creation proves his own undoing. And, in time-tested heroic fashion, Andy risks all to run back in the collapsing, flaming Morgan residence to rescue the villain, now reduced to canary size.

In the confusion, Morgan is lost. This leads Charlie to comment, in a masterpiece of understatement, "it's like looking for a lost golf ball."

Andy and Charlie only discover Morgan's fate via the afternoon newspaper: "Shortly afterwards, a neighbor reports finding his cat playing with a little suit of clothes and pair of shoes..."

Stanley lets his grimmest conclusions happen from afar. As with the fate of the evil industrialist in "The Secret Six," Morgan's death gains impact from its dispassionate depiction.

This is one way that Stanley routinely got away with stunningly grim finales. Since it's not visually depicted, and since only older, more literate readers could read the speech balloons and connect the dots, "The Mighty Mites" is, technically, still wholesome reading matter for the kiddies.

I admire Stanley's canny ability to work the system to his own benefit. "The Mighty Mites" packs as much horror and weirdness as a year's run of Tales From The Crypt--only it's executed with an adroitness and matter-of-factness the EC comix never achieved.

I hope this story properly rattled your cage. I am sorry that Stanley stopped writing these "Four Color" adventures. The combination of his imagination and the bland licensed characters, in stories such as this, are devastating.
Posted by Frank M. Young at 5:09 PM

Well I thoroughly enjoyed that. Truth be told, I have a copy of FC 198, but it's in such retched condition (looking as though it became a playmate of one of the local rottweilers, like most of the DVDs at the library), that I couldn't bear actually holding and reading it. Now I regret it!

Thanks for posting, I always enjoy expanding my knowledge of Stanley Lantz stories.

Thanks for posting the great Andy Panda comic review.