'Twas a year and a day ago that Stanley Stories: The Blog made its Internet debut!

I've managed 92 posts in the first year. That's roughly a post every 4.46 days. I hope to match or better that average in Year Two.

To celebrate, here's a little-known but mind-blowing two-part story. It kicks off the hard-to-find Dell Giant Lulu and Tubby Halloween Fun #2 from 1958.

I intend to post more Halloween stories from the two such-themed Dell Giants around Halloween. Since these stories only vaguely touch on the Hallow-theme, stand on their own, and abound with Stanleyisms and fine comedic writing, I deemed them sufficient for this celebratory post.

"Ol' Witch Hazel and the Haunted Dollhouse" is an especially dark and manic example of a Little Lulu staple--a "fractured fairy-tale" as told by Lulu to her hyperactive, semi-civilized neighbor, Alvin.

Full of comic incidents and stake-raising jollity, this story also features the shrinking and enlarging of a house--as well, said house has supernatural residents. Thus, this story is a fitting book-end to the first Stanley Story posted here, Tubby's "The Guest in the Ghost Hotel." 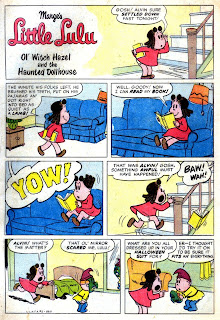 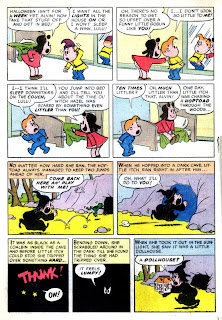 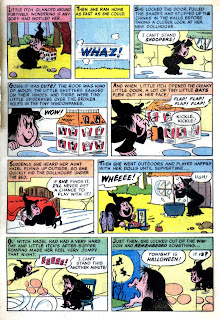 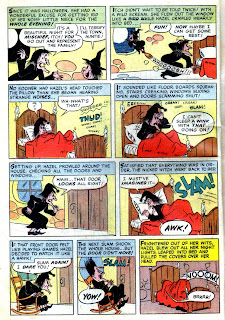 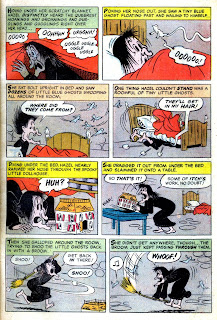 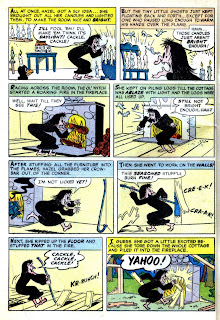 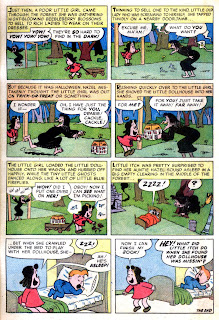 Witch Hazel and Little Itch, both Stanley creations, are rarely in finer, more compelling form than here. Both characters work better when they face adversarial situations that frustrate and aggravate them.

Tribulations abound in this raucous story. Lulu's naive presence further serves to befuddle the greed and need of the two witches. Hazel's systematic demolishing of her cottage is a sublime moment, and is depicted with great comic zeal.

The story remarkably continues with "The Cranky Giant." For once, we remain with Lulu and Alvin after the end of one of her improvised stories. Alvin is not happy with the outcome, and has a tantrum. Only a once-in-a lifetime combo of three major Stanleyisms can put out his fire: 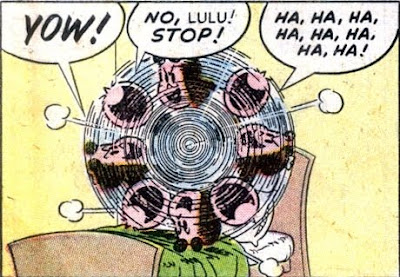 With that iconic teaser, here's "The Cranky Giant." 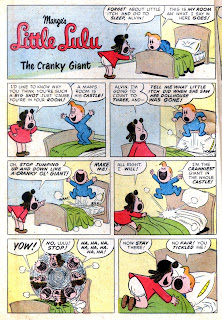 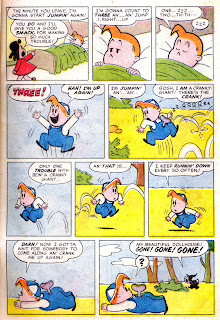 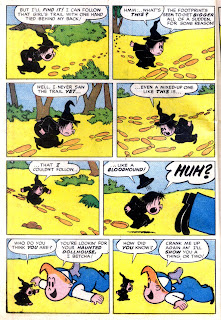 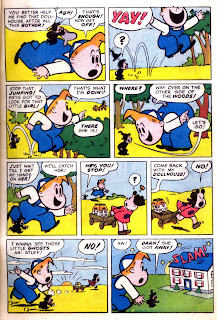 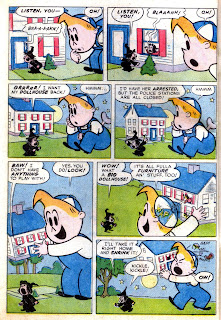 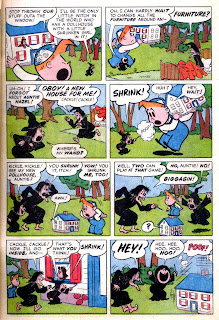 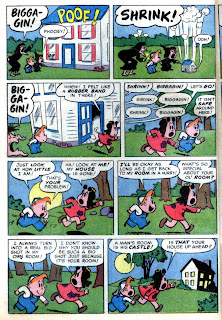 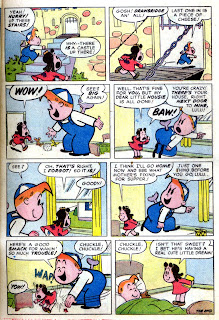 Among John Stanley's most anarchic narratives, "The Cranky Giant" breaks with several Little Lulu conventions. The story is driven by Alvin's dream-logic; it incorporates visual-verbal puns into the reality of the story; and it breaks up the eight-panel, four-tier grid of the Lulu pages with a remarkable double-decker panel (found on p.5 of the story).

At story's end, we step outside of Alvin's inner world for a charming conclusion. Perhaps it's best that Lulu lacks our access to the chaos of Alvin's imagination. What she doesn't know truly can't hurt her.

Thank you for your support and comments on this blog. I hope I can give you a second year as enjoyable and informative as the first.
Posted by Frank M. Young at 8:54 AM

Congrats on your first year. This has become my favorite blog.

Again, I read both of those in reprint in the Golden Comics Digest. Great stories.

My favorite blog, too! Each and every post has been a gem in its own right; good luck in the coming second year!!! YOW!!!

Happy Anniversary! I'd send roses, but I suspect a pile of yellowed, decarying pulpwood paper would be more appreciated. Seriously, GREAT JOB. This blog is a stellar example of many things: kindess in sharing, appreciation of a master's work, and scholarship in deepening the understanding of said master. You, sire, ROCK!

Congratualtions and keep it up, your blog is of course quite essential!!

This is my favorite site on the internets! Thanks for all the hours of reading for my daughter and me! Top notch!