John Stanley Draws "Lulu" in 1956: Selections From Little Lulu and her Friends #4

200 pages of prime mid-1950s John Stanley material comprise a pair of Dell Giants published in 1955 and '56. Snatches of these may have been reprinted in the 1960s and '70s, but these stories remain unknown to most modern-day Little Lulu readers.

Of particular interest to this blog are a scattering of stories, in the 1956 edition, that have finished artwork by John Stanley. This is not Stanley's best cartooning. Perhaps it was an eleventh-hour effort, done to meet a deadline that Stanley's typical Lulu collaborator, Irving Tripp, could not fulfill. (You'll find a similar-looking effort from 1951 in THIS POST.)

Stanley's yearly Little Lulu workload, by today's standards, is staggering: one dozen 36-to-52 page comic books, plus a quarterly satellite title, Tubby, and an 80-to-100 page annual. Stanley found time for side projects, as well, throughout his long tenure on Lulu.

He must have had a great work ethic. Small wonder that he ever found time for cartooning, between 1950 and 1963.

His best-known work of this period is the eight-issue run of Tubby (issues 2-9) that he wrote and drew solo. The scattered pages in this '56 giant are the only other published examples (that I know of) of his finished 1950s cartoon art.

That is, aside from the covers for Little Lulu, which he continued to draw through his 135-issue stint on the series. Speaking of which, here's his cover for this giant funnybook: 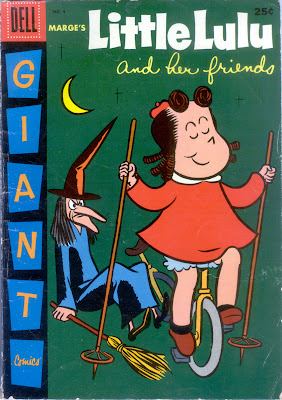 A sure-fire indicator of John Stanley cartooning, on the Lulu series, is what I call the "angry profile." As you'll see in these selections, Stanley tended to draw his characters looking POd, in a particularly angular profile.

A static ink line, so controlled it looks like it came from a technical or drafting pen, is another "tell" of Stanley's Lulu artwork.

Here is a comparison of the "angry profile" by both artists. Theirs is a subtle difference, but a telling one. Tripp tends to draw the characters with larger eyes, and their angry profiles have a softer look. Stanley's are far more severe, almost like a hawk's profile.

Stanley strived to conform to the house style Tripp quickly set up, when he took over the artwork on the Lulu book in 1948. But the characters gave Stanley trouble in the 1950s.

Marge's characters are not particularly attractive or graceful. Tripp managed to make them work; Stanley, aside from his earliest mid-1940s Lulus, which look far different from Tripp's typical cartooning, had a hard time making the badly-designed figures live and breathe on the page.

Here are all the Stanley-drawn stories from this Lulu giant. They provide a rare mid-decade glimpse of Stanley's neglected cartooning. 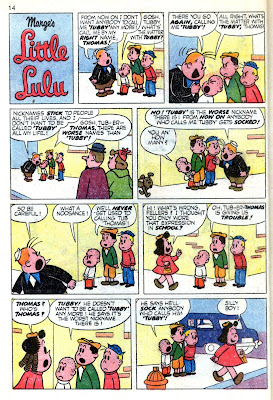 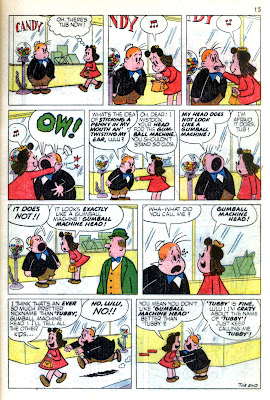 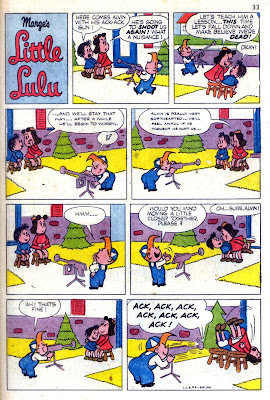 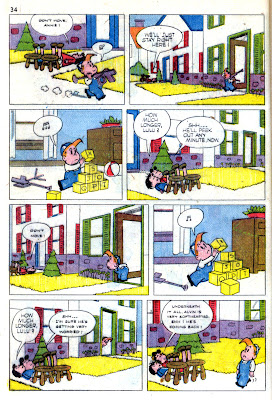 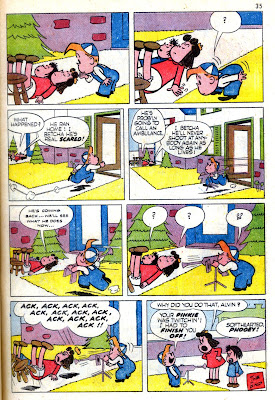 Expressive, effective cartooning graces the story above. Vivid character poses and body language sell the humor of the piece superbly. 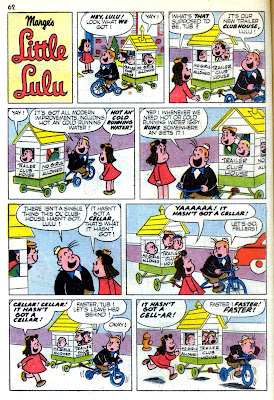 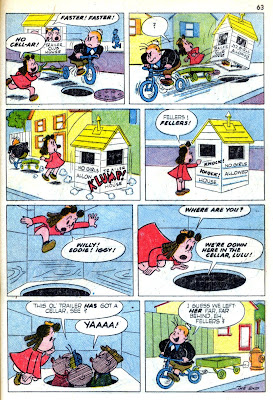 The last Stanley-drawn story is the longest, and, by far, funniest. It demonstrates that, while the Stanley-Tripp collaboration was an ideal one, Tripp leached a certain amount of energy out of Stanley's raw materials.

The irony is that Tripp made Stanley's Little Lulu palatable to the masses. He softened the agitation and darkness of Stanley's input just enough to enable it to pass by the reader without causing abrasion or alarm. Tripp's work was a boon to Stanley's. Although I mourn the lack of published 1950s Stanley cartooning, I appreciate the balance that Tripp brought to the table. 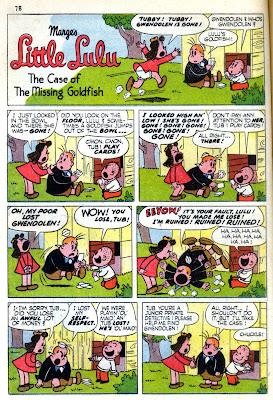 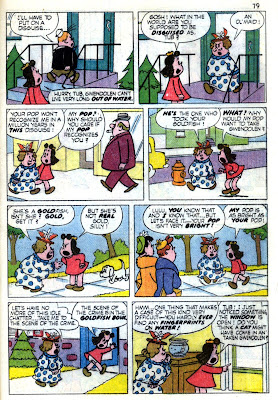 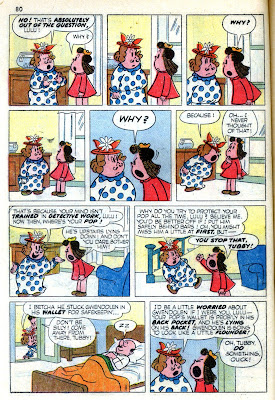 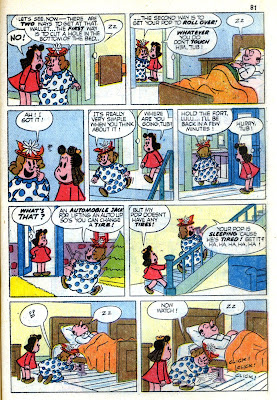 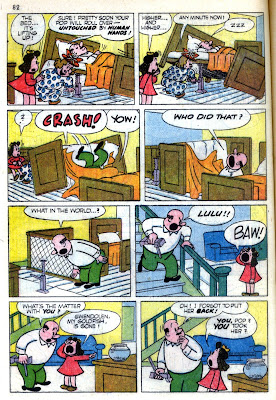 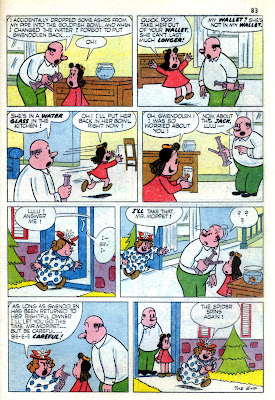 The first two tiers of the story's third page are flat-out brilliant. That's John Stanley at his best--taking liberties with the comics medium, while putting everything on the table for the benefit of his characters. That's great comics writing--and it isn't about anything plotty or significant!

It's probable that the 1955 and '56 Lulu giants will never be reprinted, so I'll run more stories from them in future posts. As always, I'd like to know what you wish to see here. As DJs used to say, "we take requests!"
Posted by Frank M. Young at 10:55 AM

Another great post, Frank, and one that has been long overdue, for this 1956 annual (as well as the 1955 "Special Friends" issue) are among my most favorite Stanley books. Your decision to focus on the Stanley-drawn stories was a wise one, as these stories are truly special and deserve to be singled out for their incisive humor and (typically) revolutionary technique. Hopefully these books will be reproduced by Dark Horse sometime in the future. Perhaps Stanley's other 1956 masterpiece, TUBBY'S CLUBHOUSE PALS, too!

Fascinating. Beyond the fact that the art work is hurried, it's obvious that Stanley's view of Lulu-land is changing, not only relative to Tripp's perspective but also to Stanley's own bucolic cartooning of the late 1940s. In this post, Lulu reminds me oddly of Oona Goosepimple. One more observation, Stanley's lively style is especially effective in portraying his most agitated chatacters: Alvin, Annie, and Iggy. By the way, you take requests? YOW! How about Tubby #4 (FC 461), the original little men from Mars story?

When I was a kid, I especially remember the little men from Mars (and their little flying saucer). If I'm not mistaken, both Tubby AND Lulu were involved with them. Anyway, I'd like to know more about where these stories could be found.

+composter1 I remember the little men from Mars (and their little flying saucer) too. I especially remember Tubby crawling inside and discovering the stair-stepped aspect of the interior surface of the craft. I've been searching for that issue for a while. I'd love to see it again.