Before the first appearance of Witch Hazel, Lulu Moppet's fictional nemesis for her meta-self, in her endless line of improvised fairy-tales, witches were a part of John Stanley's own fictive world.

Stanley seldom called on these trickster/shape-shifter characters prior to Hazel's debut in 1951. The first Stanley witch appeared in an "Oswald the Rabbit" story, which you can read HERE.

Given the significance witches, goblins, ghosts, and other supernatural figures would have in Stanley's work of the 1950s and '60s, it's a surprise how few appear in his '40s comics. Stanley did not shy away from supernatural themes in general, prior to Hazel's emergence in the Lulu universe. His attention seemed more fixed on the situation comedy of daily life.

When he took on the writing and sometimes-drawing of the title feature in Raggedy Ann and Andy, Stanley had to consider these stock elements of fairy tales and fantasy. It's one thing to have a talking panda and chicken, or a talking rabbit and bear, sharing their suburban households, and going through the slapstick paces of their workaday life.

It was another to have, as a story's main figures, two sentient, ambulatory rag dolls. Stanley's "Raggedy" stories are filled with the most high-stakes elements of fantasy stories--inescapable castles, pirates, angels--so an appearance by a cackling witch was inevitable.

These stories are strong examples of fantasy-based comics, in which wit and intelligence hold center stage with the unearthly elements. Seen as dress rehearsals for the Little Lulu fairy-tales, they have a place of importance in John Stanley's q.v.

This story borrows images and events from the 1932 Walt Disney Silly Symphony cartoon, Babes in the Woods, which must have made an impression on John Stanley. It's always fascinating to see how he messes with the stock elements, gives them more personality and higher stakes, and makes them funny and menacing in the same breath. 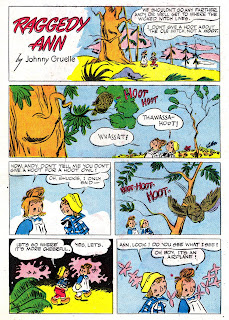 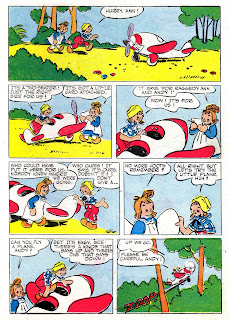 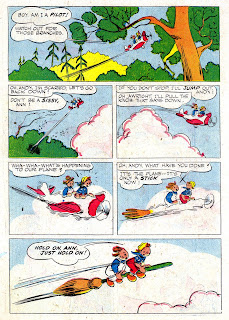 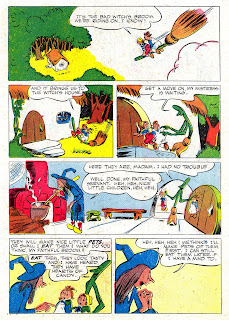 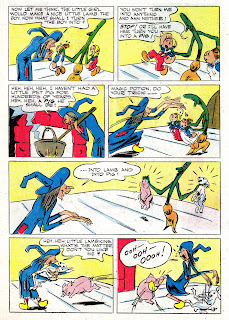 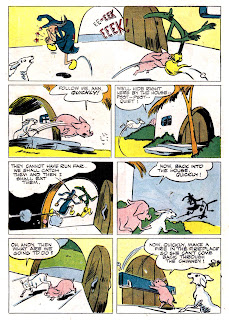 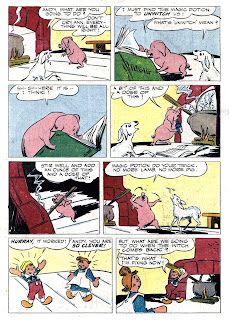 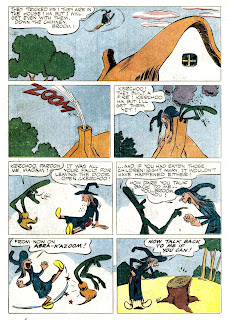 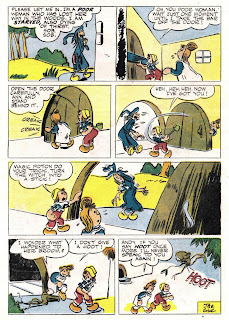 This story looks like it was drawn, or started, by John Stanley. The witch character, in particular, is congruous with the teacher, and other female figures in Stanley's concurrent "Peterkin Pottle" stories.

As well, a certain boldness, bordering on sloppiness, gives this story's drawings a real vitality that mirror its content.

As in Lulu's on-the-fly fables, this story has a drifting, loopy quality. It feels almost as if it's being created while the reader experiences it. Dreamlike transformations--as when the found airplane becomes a flying broom--add to this spontaneous feel.

The nameless witch, and her pushy broom, add a burlesque element that keeps the story's nightmarish elements from getting too intense. As well, wordplay bolsters this story. The repeated use of the word hoot climaxes with a handsome call-back/pay-off at the story's conclusion.

Stanley found the right format for including fairy-tales in the fabric of the close-to-reality Little Lulu. His gift for telling fresh stories in this vein, seemingly without effort, is among his greatest achievements as a writer. As well, Stanley never writes down to his intended audience. The reader is required to have a certain amount of savvy and wit. Without this input of intelligence, these stories might drift away from the reader's attention.

This respect for the reader is one element that has kept Stanley's work fresh and relevant, half a century (or more) past its original creation.
Posted by Frank M. Young at 7:53 PM

Labels: Raggedy Ann and Andy, Stanley in the 1940s, witches