Long time, no post. To remedy my untenable absence, here's a double-dip from a particularly good early issue of John Stanley's run on New Funnies.

Dell Comics' covers usually had little to do with the innards they contained--with the exception of their adventure-themed one-shot stories. Here's an atypical story-themed cover, to start things off right: 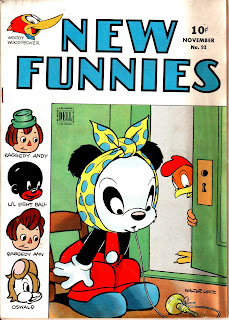 Here's the cover story. It's a warm-up for today's second feature, which I consider among John Stanley's best early stories. Why such unusually bright, strong colors on the first page? It was printed on the inside cover of the book--wartime paper-saving measures. I wish comic books had all been printed this way, cover to cover... 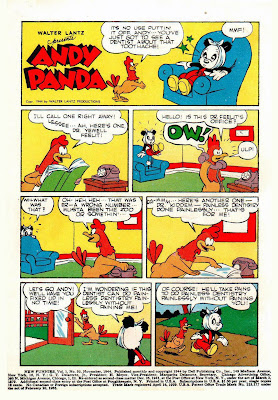 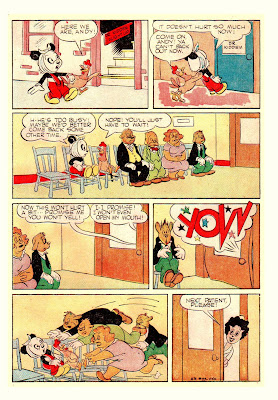 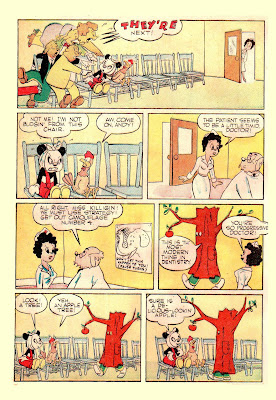 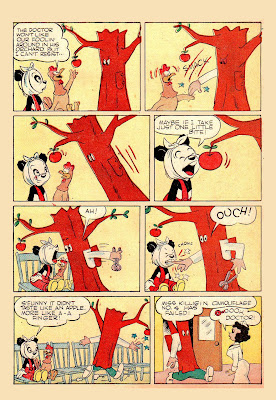 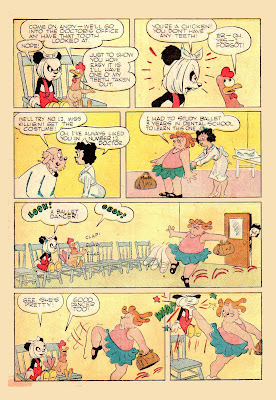 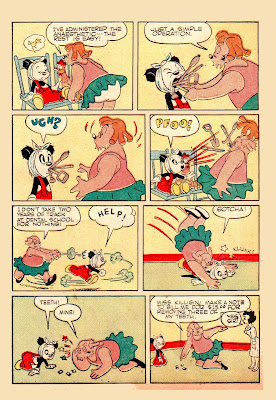 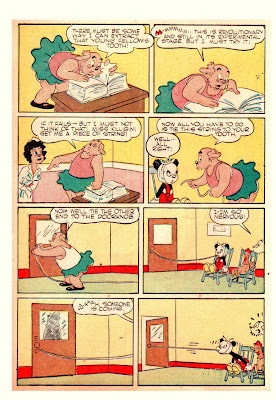 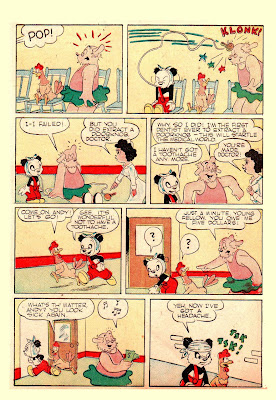 This is an extremely funny and witty story, with a quality typical of Stanley's earliest comics works. There are no real stakes to this story, beyond the prospect of Andy Panda losing teeth that don't need to be pulled.

The screwy dentist, Dr. Kiddem, seems benignly, matter-of-factly loco. One too many crown inlays may have sent this scion of medical respectability over the edge. Ditto for his supportive, chipper nurse, Miss Killigin.

Dr. Kiddem is just a poor choice--one of countless faux pas made, with the best of intentions, by Charlie Chicken.  Despite his evident insanity, he's a thorough medico. Note that, when he accidentally pulls three of his own teeth, he makes sure that he bills himself for the work.

John Stanley would soon make bolder choices, and raise the stakes of his stories whenever possible. This early effort is an example of pure screwball comedy, without the tinge of darkness that surely would have colored this story, were it written even two years later.

And now for the piece de resistance--a story old-timers may remember from the original incarnation of this blog, back when it was a primitive but sincere website. (Of course, now blogs are supposed to be old-hat, relics left in the dust by Facebook and Twitter, two popular sites I have little use for. Guess I'm just a Luddite after all!)

This Woody Woodpecker story is in my John Stanley Top Ten. It's beautifully cartooned by the author, as well. For once, the character is completely on-model with the contemporary Walter Lantz cartoons. The funnybook Woody was often ugly-looking, and he so resembled the screen version. 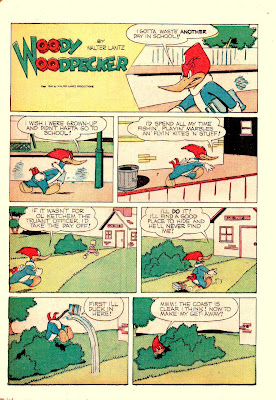 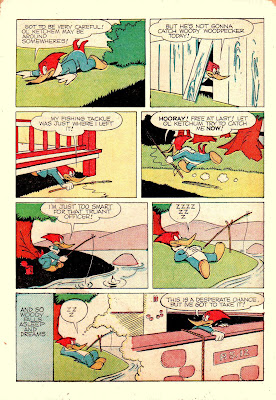 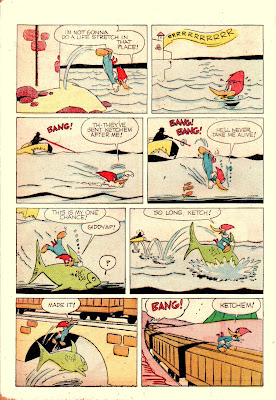 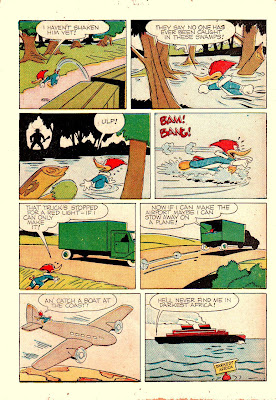 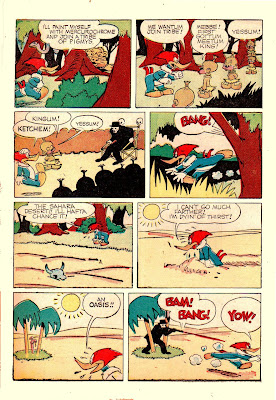 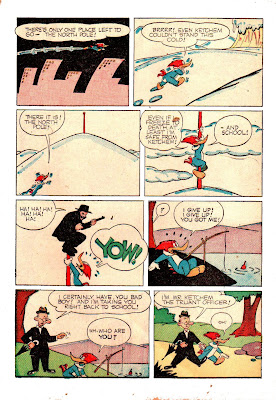 This story anticipates so many major Stanley themes--and presents them with vigor and intensity--that I consider it an important piece in Stanley's development. Here is the proto-Tubby character: the egocentric, self-righteous, rebellious man-child that is most typically John Stanley's focus character. Here, too, is the Terrible Thwarter/Obstacle--a literally nightmarish heavy who bears the bird genuine ill will.

I wonder if Stanley saw and liked "Tex" Avery's MGM animated cartoons. This untitled story bears the probable influence of Avery's 1943 cartoon, Dumb-hounded, which introduced the phlegmatic anti-hero who would eventually be named Droopy.

It's actually closer in spirit to the more intense, paranoiac Avery follow-up, 1946's Northwest Hounded Police. In both cartoons, the retiring, inert Droopy turns up in relentless pursuit of a panicky wolf, who escapes from prison but finds himself in an ever-restrictive nightmare. Everywhere he goes, no matter what he does, the underwhelming Droopy finds him, and confronts him without affect or aggression.

Here's some screenshots from Dumb-hounded: 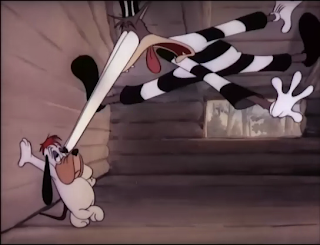 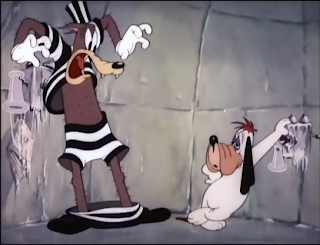 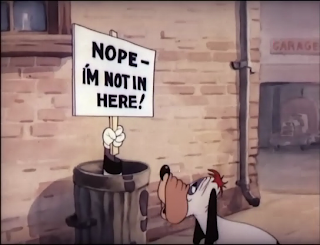 As in Avery's animated cartoons, the settings change constantly, at rapid pace, and are tableaux of pop-culture cliches, shot through with horror. All are creations of Woody's addled imagination. He is chagrined by the actual Ketchem. Unlike McNabbem, the similar enemy of Little Lulu's Tubby Tompkins, Ketchem is a non-threatening wuss. McNabbem appears capable of causing the Lulu cast physical and emotional harm; he blessedly lacks the cunning to fulfill his brutal potential.

Within the same issue of a comic magazine, we can see Stanley go from harmless screwball antics to high-stakes, horror-laced black comedy. Both styles of humor are handled expertly. While the first story is merely funny and entertaining, the second has a bit of recoil. It's hard to forget its scrambling sense of inescapable terror, blended with deadpan satires of pop-culture tropes.

Stanley would only get better at achieving this blend of horror and humor. It's revealing to see this early,assured synthesis of dark and light.
Posted by Frank M. Young at 7:28 PM

As a kid I always disliked comics based on animated characters...they lacked so much of what made the cartoons great.

Now as I'm older I realize that those comics (those of the 1970's) DIDN'T just lack that...they lacked everything!

The comics of the 1940's and 1950's based on the characters from Warner's or Universal or MGM, I've come to learn are GREAT thanks to folks like you.

It seems that back then, the artists and writers actually understood that this was a different medium, and added other dimensions to make up for what wouldn't be there.

Seems so obvious now. Like I always say, the at of the first generation of a medium is so much better before the fanboys become the creators and lose sight.

I wonder whether the African scene is meant as an allusion to [i]The Phantom[/i]. The Skull Throne certainly seems to be suggested.

Well, now I have to part with Frank: I much prefer the pastel colors on cheap paper rather than the bright colors on slick stock. On the other hand, I totally agree re Facebook and Twitter. Luddites of the world unite!

Just wanted to say how much I enjoy and look forward to this blog. It's made comics exciting to me again.
Thanks!