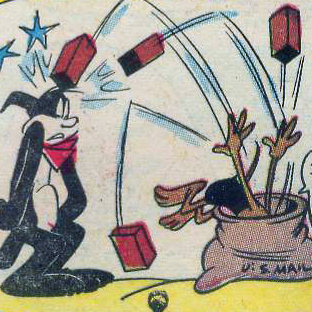 This series was an apparent challenge to Stanley. The first two issues show him struggling to get a grip on these felicitous characters, and the whimsical settings--both at odds with his prior, mostly urban/suburban material. Of course, just as he was getting into the Kokonino Kounty groove, Dell had to cancel the series.

These are some stories from the last issue of the first KK run. This untitled "Ignatz Mouse" story is very similar to a couple of contemporary Little Lulu stories. "Space Kids," from LL 56 (September, 1953), shows Tubby an' Th' Gang [TM] attempting a similar space-age mind fudge on Lulu and Annie. In "Trip To The Moon" (LL 86, August, 1955), the rascals fake-out Lulu into believing she's gone to--I don't need to finish typing that sentence, do I?

This theme surfaces other times in Stanley's LL and Tubby stories. Free to portray the "Tubby Type" in its apotheosis, Stanley lets Ignatz run rampant in his astro-prank, as you'll see... 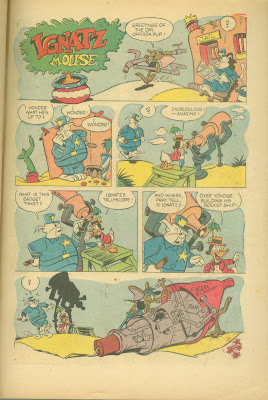 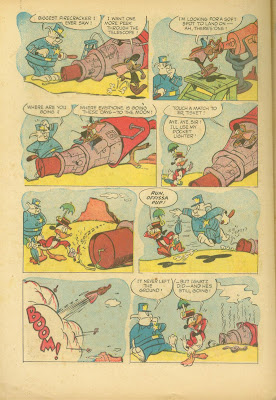 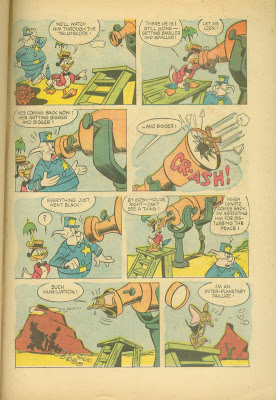 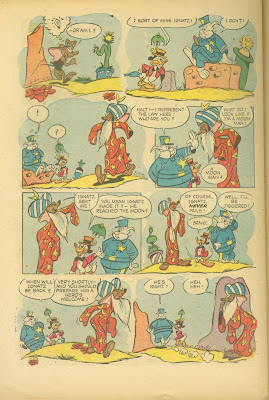 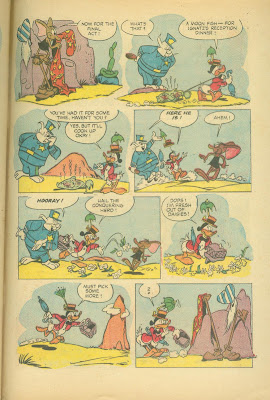 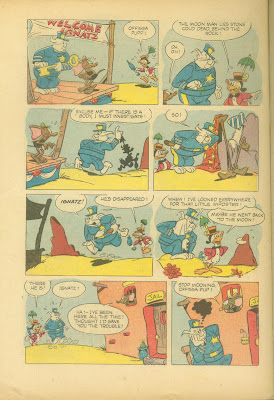 Air travel is a theme in this issue. This longer story takes more time to explore its absurd set-up, and is peppered with sprightly word-play. Stanley let himself romp on the pages of this funnybook... 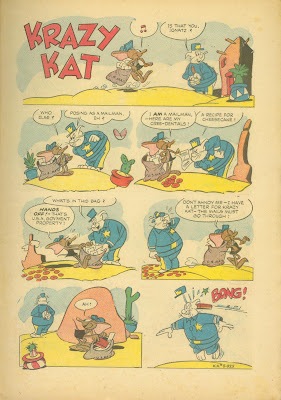 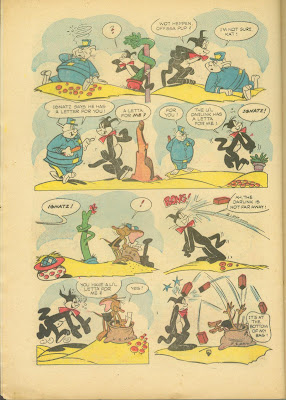 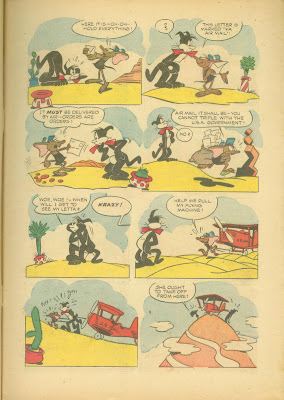 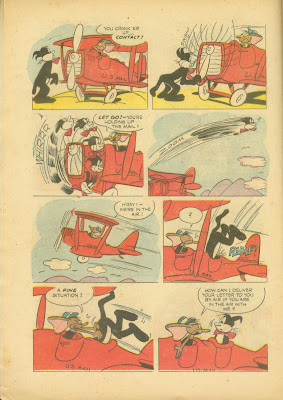 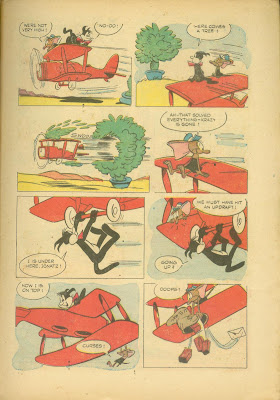 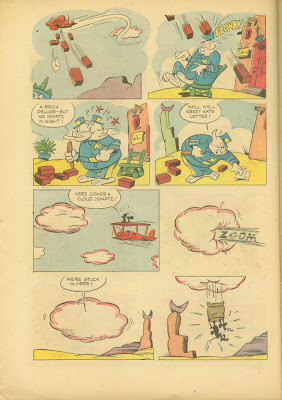 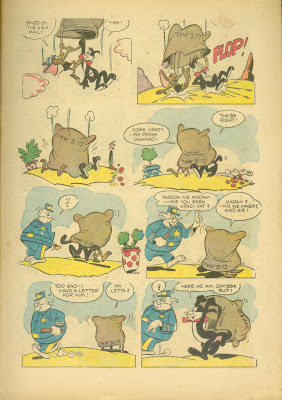 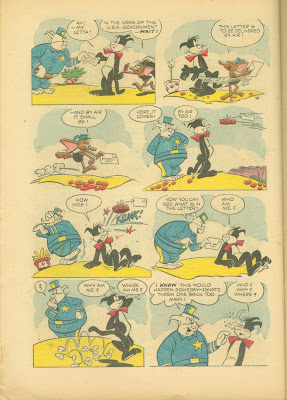 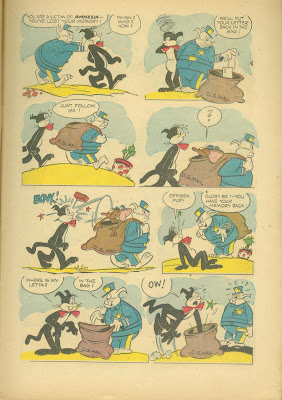 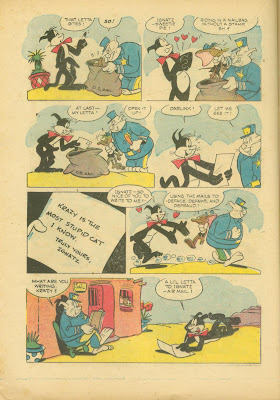 Ignatz' single-minded pursuit of an exhausting, complex prank again reminds us of Master Tompkins. This story plays as a sort-of Tubby daydream. There is an air of wish-gratification in the careening events: the kind of mid-day fantasia a bored Tub might have, fighting off post-lunch sleepiness in the back of Miss Feeny's class.

As freewheeling theater-of-the-absurd entertainment, these Krazy komix have their undeniable charms. As with the recently posted New Terrytoons material, this isn't first-rate John Stanley. But there is a sense of joy and abandon. While he continues to work within the formulae of Little Lulu, he is able to take greater risks with the characters--which he clearly enjoys. Unlike Lulu, Krazy is a sort of Zen airhead. His/her lack of emotional reaction to Ignatz' mischief is disarming.

There is displayed a certain reverence for the original Geo. Herriman conception of the strip. Stanley, who was usually prone to re-invent the cast, add new characters, and otherwise slant the personas of his adopted, licensed figures, stays fairly true to the vibe of the original. He is, perhaps, more clever than Herriman--one does not sense the intellectual struggles that make Herriman's work fascinating and transcendent.

When I read Herriman's Krazy, I strongly sense the hard effort of thinking. I don't feel that funny stuff came to him as automatically as it did to Stanley. Herriman and Carl Barks have this in common: their work feels ponderous (altho' in a good way). While Stanley's work has obvious smarts to it, I don't think he puzzled over his work. It feels as though he got 'in the zone' and just produced these stories in a burst.

I can't say for sure. This remains the "Rosebud" of John Stanley: I still know almost nothing about the man. I have been in contact with Stanley's son, James, and with a former Dell Comics editor, with whom I hope to do an interview, who worked with Stanley in the 1960s. It is my hope that both these individuals can help me shed some light on who Stanley was as a person, and how he developed his sense of humor, and appreciation of the absurd.

For now, I'm just wondering out loud here. I appreciate your humoring me while I ramble a bit.

For a chaser, here's the title-free Ignatz story from the 1955 "Four-Color" KK #619. While its frantic events are kinda kontrived, Ignatz' poetic monologue, on the opening page, is Tubby-Talk at its most profound. 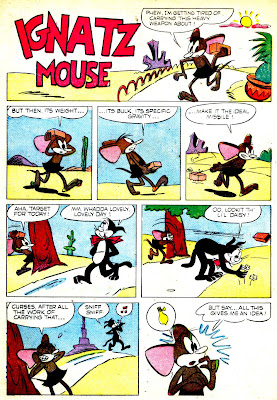 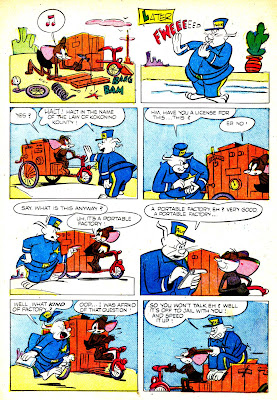 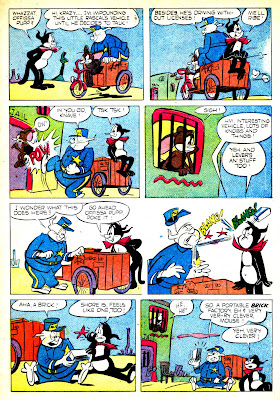 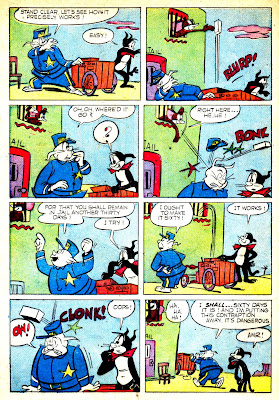 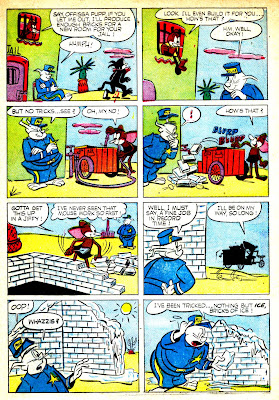 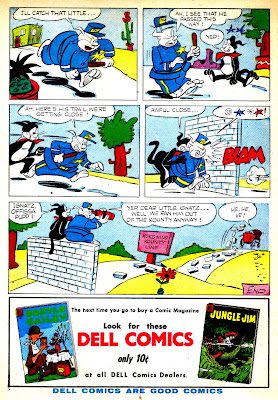 While the goings-on in this '55 story are more brassy and bold than amusing and clever, Ignatz' anti-social behavior is too gleeful to resist.

In contrast to the 1952 stories, this seems rather dashed-off. Stanley's workload was more regulated in the mid-1950s. Though he was drawing the quarterly Tubby, which may have consumed more time than usual, he wrote some 480-odd pages of Little Lulu material--for the monthly comic and one 100-page giant. Assignments such as this and the Little King one-shots may have been squeezed in to fatten the ol' paycheck.

In closing, I hate to contradict Dell's advertising copy, but, rest assured--no goodness, or entertainment, could be had in either funny-book pictured in that filler ad.
Posted by Frank M. Young at 11:34 AM

Do you have a list of what issues Stanley did New Funnies for? I think its something like issues 86 - 130. But'd I'd like to know exactly which ones. (were there ones between 86-130 that he DID NOT work on?)

Woody Woodpecker got a regular series with issue #86. Stanley dropped Eight Ball to write Woody, with a few return gigs.

The only issue of this period with NO Stanley content is #106.

In 1944-5, Stanley took over the OSWALD RABBIT feature from Gaylord DuBois. He wrote Andy, Woody and Oswald consistently until at least issue #129, which I believe is his final issue on NEW FUNNIES. (I have not seen issue #130 or 131. #132 is most certainly not Stanley's work.)

Towards the end of his run on the title, he began to write Li'l Eight Ball, which was cancelled after issue #126. 1947 issues of NEW FUNNIES can have up to 32 pages of John Stanley scripting.

Stanley also wrote several "Four Color" one-shots with Oswald, Andy and Woody from 1944 to '48. He did not write any of the "March of Comics" issues with Walter Lantz characters, with the possible exception of #16, which may have been co-written with cartoonist Dick Hall (also my guess for the first two Woody "Four Color" one-shots).

That's the NEW FUNNIES history in a nutshell. Hope this helps out...

Thanks. That is indeed helpful. I'm trying to collect them, and I'm going for the Stanley stuff (mainly). I only have a handful right now. Are any of the stanley issues really rare in particular?

Issues before #93 seem to go for the most money. The best ones, in my humble opinion, are the 1946 and '47 issues, especially from 116 to 128. Those have the largest amount of Stanley material per issue in them.

I have probably caused prices on NEW FUNNIES to get higher. There are still several issues I lack, and may never be able to acquire. Gone are the days when these comix could be acquired for a dollar or two apiece!

Me, too. As long as the pulp paper isn't brittle, and the inner pages don't have psychotic kid scribbles all over them--which I find fairly common with these NEW FUNNIES issues that have survived the decades--I could care less about condition.

I lucked into a substantial run of the Stanley issues in 1982, long before I knew Stanley had any involvement in the writing (and, sometimes, artwork).

I'm still missing about seven issues of the run--mostly earlier, less interesting numbers. I do lack a couple of the great 1947 issues. If only I weren't banished from eBay, I could easily acquire them. But that, as they say, is another story altogether...

What issues are you missing? IF I ever end up with any dupes (which happens all too often since I buy individual comics, and then sometimes lots) I'll send them to you.

These are the issues I lack in tangible "hard copies"--most of them are earlier ones...

The last two are my most-wanted issues. If you should acquire dupes of any of these, please let me know! Thanks!

Wow! I hadn't heard of this before. I love Stanly and am a huge Kat fan. I've been neglecting my comics studies. Thanks so much for this.