Here's a Stanley Stories first--a story with no John Stanley involvement! It's the first outright ripoff of John Stanley's characters and style that I've found.

None other than Stan Lee is responsible for this. Artist David Gantz did the pictures. It's an obvious attempt to imitate the early Stanley Little Lulu comics. Just as Stan Lee pilfered Chic Young's Blondie for the execrable "Rusty" (grudgingly illustrated by a young Harvey Kurtzman), he crocheted a simulacra "Lulu" for this "Comedy Features Syndicate" offering. 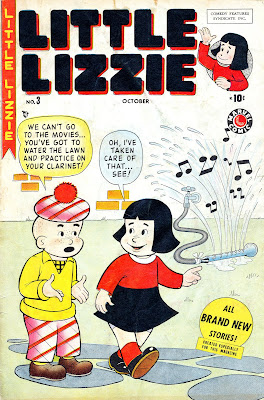 It's a Nancy and Sluggo rip-off, too--a further irony, considering Stanley's tenure on the Dell Nancy comics, one decade in the future. (Did Stan Lee have a crystal ball in his closet?)

In fact, there may be more "Nancy" than "Lulu" here. That the story is a narrative, and not just a string of stand-alone gags, ties it to Stanley's Lulu work. Gantz's drawings straddle the Ernie Bushmiller and John Stanley-Irving Tripp styles (which have, themselves, some obvious kinship).

This is fascinating for so many reasons:

a) its brazen. shameless imitation
b) how thoroughly it fails to emulate John Stanley's style of writing
c) its weird, lackadaisical pacing, and the use of "Y-I-I-I-I-I!" in place of Stanley's "YOW!"

I present this train wreck for your unjoyment. All aboaaaaaaaaaaard! 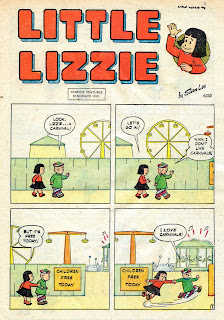 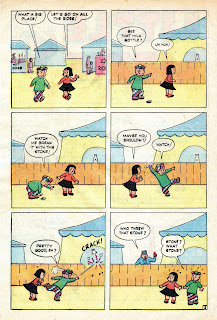 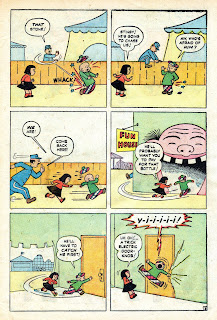 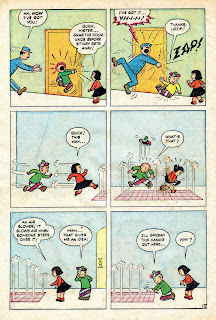 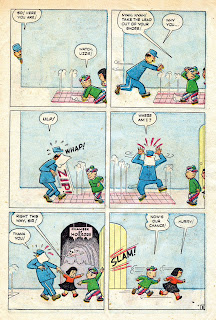 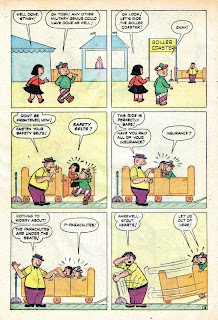 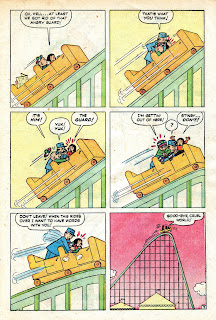 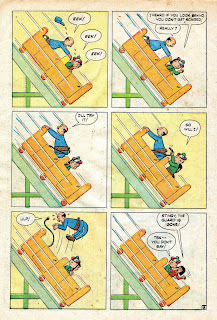 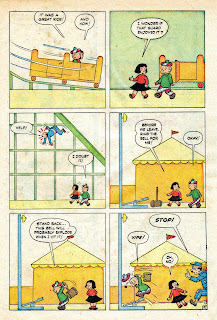 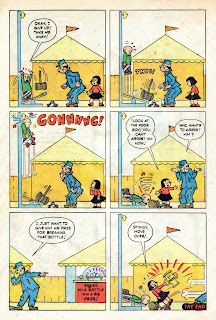 Whew. This thing lasted for five issues--and was revived in 1953. Lee also cranked out Little Lana and Little Lenny titles, which I'd assume were similarly derivative. Marvel reprinted some of this material in the early 1970s. Timely humor titles of the post-war years had other "Little" characters such as "Little Vinegar" (Li'l Iodine rip-off) and "Little Aspirin" (a sorta steal of the Kayo character from Frank Willard's Moon Mullins).

Artist Gantz at least tries to do his job neatly--as did Kurtzman, with the woebegone "Rusty." Imitations and cash-ins have been part of the comic-book fabric since Day One. Newspaper comics have had their share of shameless knock-offs. There have been many sincere flatterers in comics history...

If you know of other Stanley knock-offs (not including series on which he worked), please share them with us.
Posted by Frank M. Young at 9:31 AM

Certainly it's a proper rip-off without question ,although it seems to me they had in mind the popular strip by Ernie Bushmiller more than the Little Lulu series, not just for the characters, who are a shameless copy of Nancy and Sluggo, also for the way they interact and the laconic, straight dialogs, the austerity of the plot or, as you well note, the attempt to make it look like a comic-strip reprint.
On pages 7 and 8 the artist "borrows" one of more Bushmiller significant features: to make prevail the repetition to highlight the differences. Actually we can see this naïf peculiarity throughout the story.
Obviously it doesn't reisist the comparison with Stanley's work.
But the thing is -in some perverse way- I liked it. Probably in account of its oddity more than its quality...

Thanks for your thoughts on this! Thanks, as well, for your very kind and sympathetic post on my financial plight.

For some odd reason, I could not write a reply to that posting on your blog. So this is my way of saying thanks, friend!

I will admit, the "Little Lizzie" story has a peculiar allure. It's rather hypnotizing!

No worries, Frank.
There was no need to thank. That was the reason I didn't enable the "comments" field. It just was a little gesture hopping to help in some way. After all, what is The Internet for? Wish your standing will better soon, mista'.

Proof that the Golden Age was not always golden. I actually got a headache reading this.

Things like this from the past don't bring the bile to my throat like when they're contemporary. Something about their age I guess.

I despise commercials, but love the one's from the 1950's (before my time)...they can't harm us now I suppose.

Though I'd MUCH rather see the good stuff and feel better after. Thanks for bringing us this historical piece of trash. I hope we all learn from it.