There are still obscure by-ways of the John Stanley saga we haven't covered yet! Today's post puts a 30-watt spotlight on one of Stanley's minor works--New Terrytoons.

This title was a belated tie-in to a brief renaissance at the lowliest American cartoon studio--Paul Terry's outfit. Animation nerds treasure the 1950s Terrytoons for the scenes animated by Jim Tyer. I am among this group of enthusiasts--Tyer's reckless experimentation, possibly fueled by sheer boredom, produced the wildest animation seen in the classic American theatrical cartoon.

Terry's studio cleaned house in 1957 with the arrival of Gene Deitch. Deitch was an apostle of the UPA-style cartoon modern school. He cleaned house and changed the Terry look and feel to a more designy, astro-moderne groove. Only Jim Tyer was hep to this new jive--most of the other Terry animators, vets from the pre-sound era, were annoyed and uncooperative.

Deitch left Terrytoons quickly, but the modern graphics stuck. The studio began to produce TV cartoons, while continuing their movie cartoons for 20th Century-Fox. Among their TV hits was Deputy Dawg, which seems to have inspired Western Publications to license the Terry characters for a Dell Comics title.

The Terry characters had previously been licensed by Timely, St. John and Pines. Some of these comics were written and drawn by Jim Tyer and other Terry animators. Like Nancy and Sluggo, the Terrytoons franchise had been around the block a few times before Dell signed up.

These became John Stanley's first funny-animal comics since the late 1940s. They would also be his last. One senses that Stanley was not thrilled to backtrack into this territory. New Terrytoons was a quarterly magazine: evidence that Western wasn't 100% sure of the saleability of the book.

They underestimated their audience. The title lasted until 1979. Stanley appears to have worked on the first eight issues, published from 1960 to '62. This work was done alongside Dunc 'n' Loo, Nancy and Sluggo, Kookie, Linda Lark and the horror comics.

By the fourth issue of New Terrytoons, Stanley had warmed somewhat to his fate. He seems to have enjoyed writing the lead feature, "Deputy Dawg." In this story, he seems to pay homage to his old pal, Walt Kelly. The characters' dialogue, attitudes and the swamp settings sort-of allude to Kelly's Pogo. This blend of strident jet-age sitcom and cornpone characterization is unique to Stanley's work.

Deputy Dawg served as the host of New Terrytoons, introducing each of the book's short, untitled stories. 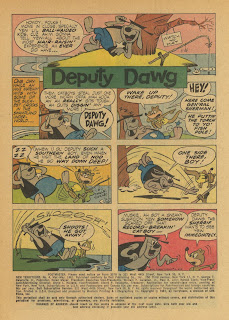 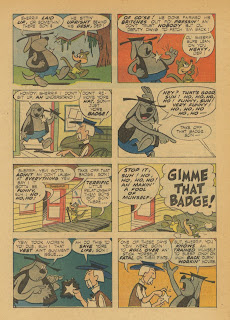 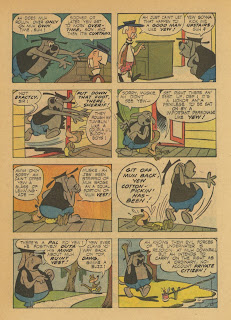 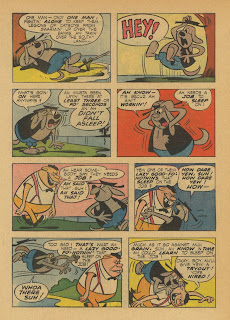 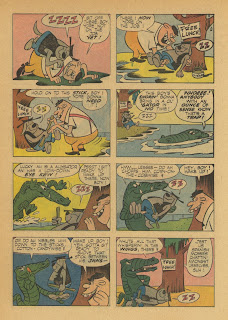 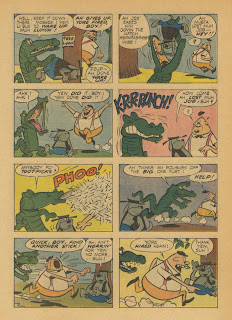 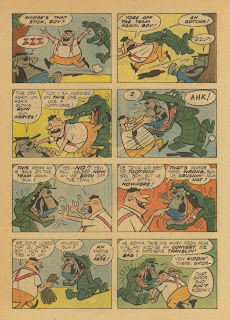 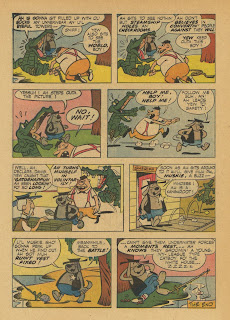 This rollicking story has some sharp touches. Deputy Dawg is a sort-of Tubby Type, albeit with a very low metabolic rate. His credo of only sleeping while on the job is stated with conviction. The ravenous, conniving alligator seems an obvious nod to Kelly's Albert. Note the frequent mis-spellings of the word "sheriff." Who wuz mindin' th' store thet day?

The cartoonist here, credited by the Grand Comic-book Database as Fred Fredericks, greatly resembles one of Stanley's old collaborators from the New Funnies days. Compare the "Oswald the Rabbit" story I recently posted. It's crude but vigorous. Fredericks seems to have preserved much of Stanley's original energy. In fact, I wonder if this distinct look was present in Stanley's pencils. There's enough similarity in style to suggest this.

Next up are three characters from the old days at Terrytoons. The sub-Tom and Jerry "Little Roquefort" dates from the 1940s, while Gandy Goose and Dinky Duck go back to the '30s. These three short stories are riddled with Stanleyisms, and have the recognizable shrill tone of his 1959-62 work. 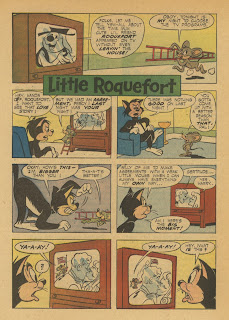 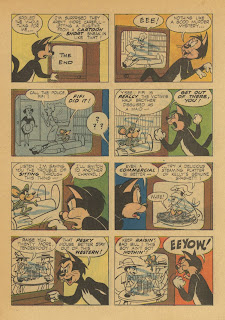 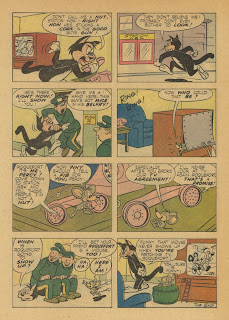 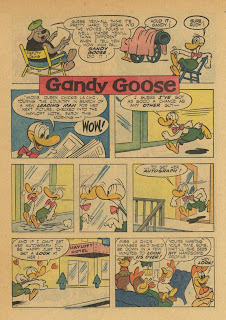 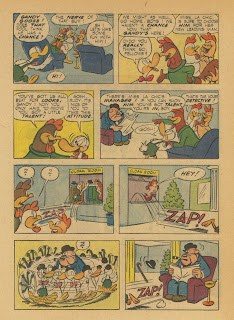 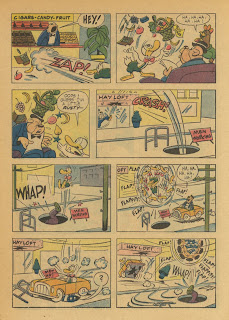 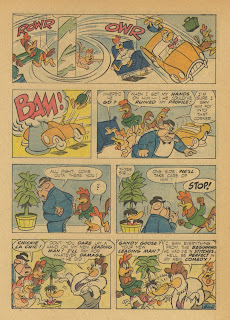 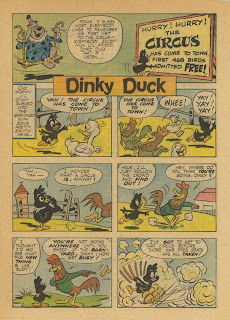 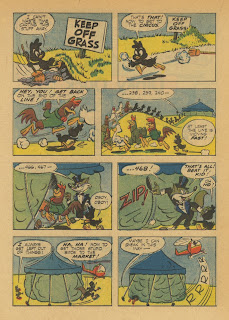 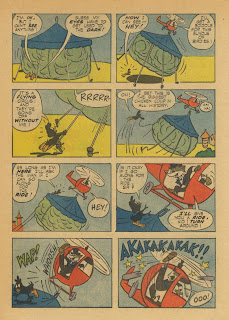 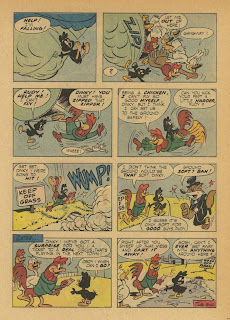 The "Roquefort" story amuses with its mind-fudgery, as the mouse destroys the comforting fourth wall of network television. The other two, while minor stories, abound with energy and have their moments. The plethora of roosters in both stories bring to mind the Stanley-created Charlie Chicken, Andy Panda's domestic partner from New Funnies.

They're far better than the drek his Western peers (with the sole exception of Carl Barks) churned out for the other Dell licensed titles. It feels to me like Stanley atoned for the flimsiness of the characters with a three-ring circus of sitcom frenzy.

Stanley's comics became extremely diagrammatic in this period. The abundance of bold, graphic sound effects and visual icons seem, to me, a tell that he wasn't much invested in these characters. [Not much there, to begin with...]

The Dinky and Gandy stories read more like a schematic than an actual comic strip. They don't scan well: there's too much going on at once.

Today's final story is a product of the Deitch regime at Terrytoons. Here is a CinemaScope version of the first "Silly Sidney" cartoon, with more typically whacked-out Jim Tyer animation: 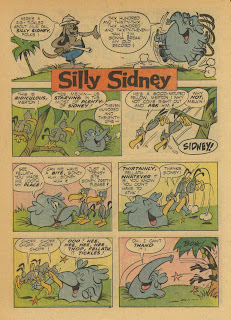 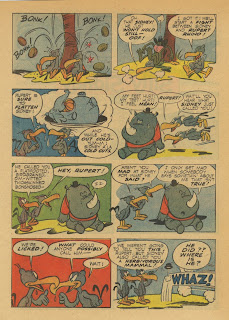 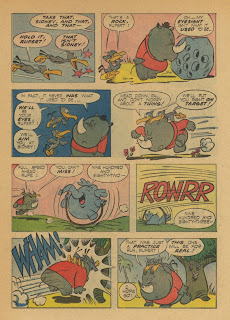 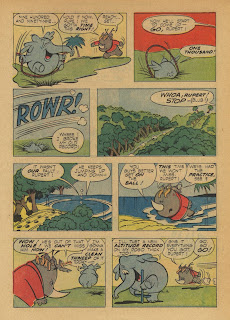 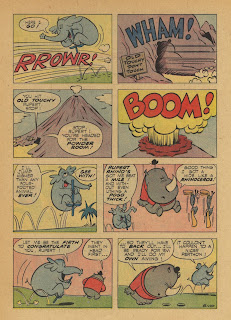 The myopic sociopath rhinoceros (a string of words you won't see anywhere else, ever!) Rupert, is a particularly vivid example of the Stanley Terrible Thwarter/Obstacle. He has a low-key repressed rage--a genuinely sinister edge to his character, much like McOnion from the Nancy and Sluggo series. I fear for Merton and Melvin's lives, in the comic book reality that continues after the story's close.

The vultures' open request to dine on Sidney, on the first page, impresses with its macabre freshness. The sharp-eyed reader will note the numerous incidences of choffing in these stories. The Albert-esque alligator, in the "Deputy Dawg" story, uses "choff" as a verb--the only time I've seen this occur in Stanley's work!

Stanley's New Terrytoons work, while not top-drawer, bears its maker's mark. These stories are the best of the eight-issue series. Stanley's writing becomes increasingly mechanical; it's evident that this quarterly project occupied his interest less as time straggled by.
Posted by Frank M. Young at 9:34 AM

Interestingly enough, he reused that old 'Dinky doesn't get to join in in being murdered' chestnut that was used in at least two of the original Terrytoons. Thanks for sharing, love seeing all of your discoveries.

Who illustrated the Silly Sidney comic?

Possibly Dick Hall; it looks like his inking style. The Grand Comic-Book Database credits one Fred Fredericks as the sole artist of issue #2. Like Overstreet's Price Guide, the GCBD is riddled with well-intentioned errors and hearsay. It could be either of these artists.