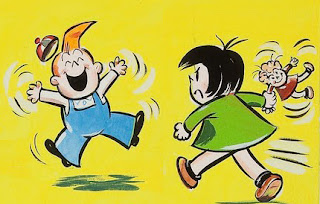 For a change of pace, here is some John Stanley original artwork I've found on Heritage Auctions. The first one is from a current auction. It's a quite sharp and well-drawn piece from the mid-1970s.

"John Stanley Little Lulu and Tubby Halloween Fun #6 Cover Re-Creation Original Art (c. 1970s). John Stanley revisits the world of Lulu, Tubby, Witch Hazel, and Little Itch with this fun cover re-creation, taken from a 1957 Dell comic book cover originally finished by Irving Tripp. Stanley added considerable detail missing from Tripp's version, and also added his signature in the lower right corner. The art is in ink and watercolor on illustration board, with an image area of approximately 11" x 15.5". An old overmat was at one point rubber-cemented to the board, and has now been removed, leaving a stain outside of the image area; otherwise, the art is in Excellent condition." 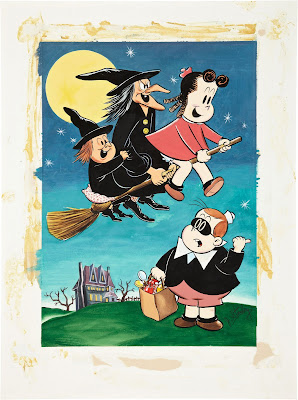 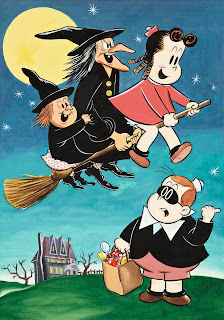 I thought to look in the closed auctions, and found 10 other pieces of original artwork. Since these will eventually get lost in the shuffle, I thought it would be nice to save them all here: 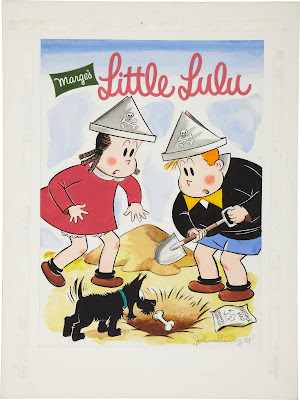 "John Stanley Little Lulu and Tubby Painting Original Art (1977). While Marge (Henderson) Buell created Little Lulu as a single-panel cartoon feature for the Saturday Evening Post, it was writer/artist John Stanley who created Lulu's adventures for the Dell comic books. Stanley developed and expanded the personalities of Lulu, Tubby, Alvin, Iggy, Annie, and the rest of the cast. Just as Carl Barks was commissioned by his fans to paint specialty pieces of Donald Duck and Uncle Scrooge, so was John Stanley commissioned to paint fondly-remembered images of Little Lulu and Tubby. The image area of this mixed-media painting is approximately 12.75" x 18", and the art is in Excellent condition. John Stanley has signed the painting at the lower right." 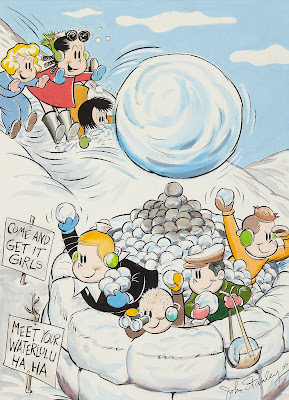 "John Stanley - Little Lulu and Tubby Painting Original Art (1979). 2005 marks the sixtieth anniversary of the publication of the first Little Lulu comic book, Dell's Four Color #74. While Marge (Henderson) Buell created the mischievous moppet as a single-panel cartoon feature for theSaturday Evening Post ten years earlier, it was writer/artist John Stanley who guided Lulu's exploits in the Dell comic books. Stanley developed and expanded the personalities of Lulu, Tubby, Alvin, Iggy, Annie, and the rest of the cast of Meadowville characters. Just as Carl Barks was commissioned by his fans to paint specialty pieces of the Duckburg clan, so was John Stanley commissioned to paint fondly remembered images of Little Lulu and Tubby. In this hilarious scene, Tubby has exceeded the weight limit of the tires of Lulu's tricycle, and blown them out -- Yow! Alvin and Annie also co-star in the upper right. The image area of the mixed-media painting is approximately 10.5" x 15.25". The art is in Excellent condition and John Stanley has signed the painting at the lower right." 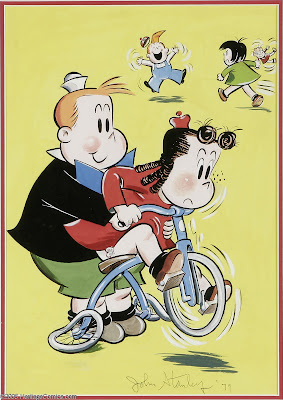 "John Stanley Marge's Little Lulu #84 Cover Re-Interpretation Original Art (1992). Not just a re-creation, this terrific cover re-interpretation features an uproarious gag even funnier than the one used for Marge's Little Lulu #84 in 1959. Many comic book fans consider John Stanley on a par with Carl Barks as Dell's two greatest writer/cartoonists. This piece has an image area of 11" x 15.5", and the art is in Excellent condition. Signed and dated in the lower right." 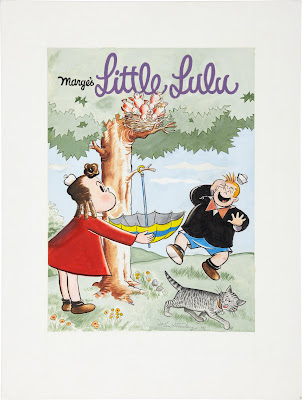 "John Stanley and Lloyd White - Original Cover Art for Tubby #22 (Dell, 1957). This cute cover features Marge's Tubby fishing as a flock of ducks look on expectantly. Haven't we all had that experience? The piece is in good condition with some blue line marks and light soiling, and measures approximately 11" x 14" with an image area approximately 7" x 10". John Stanley contributed the layouts and the concept, while Lloyd White is the pencil and ink artist." 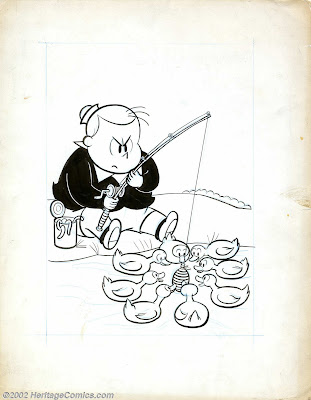 "John Stanley - Little Lulu "Psychic" Preliminary Drawing Original Art (undated) This ink on letter bond drawing may have been done as a preliminary for one of John Stanley's paintings. A note at the bottom reads, "Deja-vu here, Don -- I have the feeling I did this sometime back in the dark (light?) ages -- forget it." The page has an overall size of 8.5" x 11", and the art is in Very Good condition." 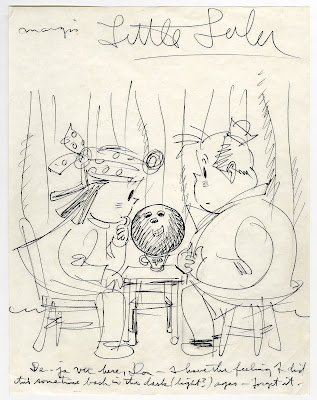 "John Stanley - Little Lulu "Spin the Bottle" Preliminary Drawing Original Art (undated) Tubby takes center stage in this ink on letter bond drawing which may have been done as a preliminary for one of John Stanley's paintings.The piece has an overall size of 8.5" x 11", and the art is in Very Good condition." 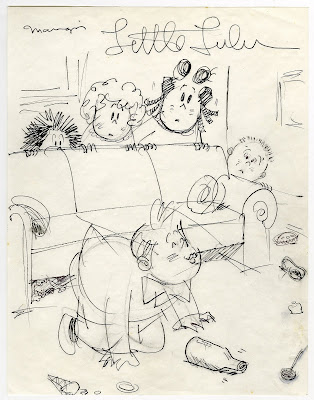 "John Stanley - Nancy Cover Preliminary Original Art (undated). John Stanley worked on Nancy and Sluggo for Dell and here is a pencil rough for a cover gag. The image area is 8.5" x 11". The art is in Very Good condition and John Stanley signed the art at the lower left." 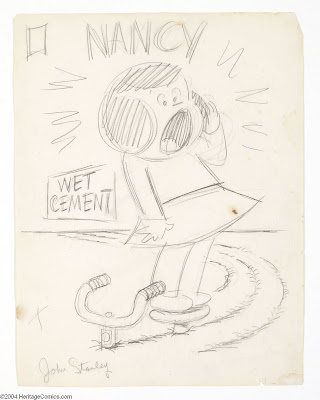 "John Stanley - Thirteen Going on Eighteen #22 Cover Original Art (Dell, 1967). John Stanley was one of the greatest talents ever to work in comics, and many fans consider him the funniest writer, bar none. His work on Marge's Little Lulu, Nancy, Thirteen, and Melvin Monstercreated generations of fans. This cover art is somewhat of a rarity in that Stanley has signed the art in the lower right, something that he was rarely allowed to do. The image area measures 10.5" x 12". There is moderate use of white-out for art touch-ups; otherwise the art is in Very Good condition." 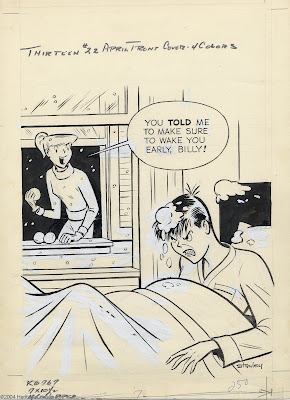 "John Stanley - Thirteen #28 Cover Original Art (Dell, 1970). Val and Judy both take credit for the wandering eye of the cute boy in their midst. This charming cover features Thirteen's two leading characters at their most adorable. The art measures 14" x 19" and is in Excellent condition with minor creasing at the corners that does not affect the artwork. A copy of the printed comic is also included." 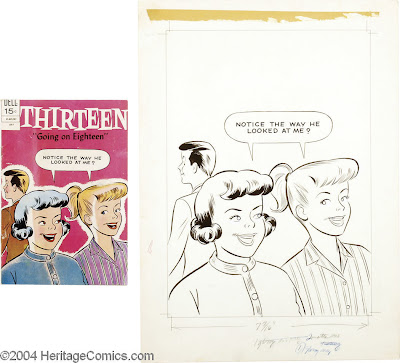 Of course, we know that this is really the artwork for issue #3's cover, which was reprinted as the book's 28th and last issue... the lucky bidder probably did, too...

As said, I think it's apt to save these from oblivion. Heritage's back lists also had several non-Stanley items that were listed as being by Stanley.

POST-SCRIPT: Here's an update with two recently surfaced John Stanley pieces. As this is one of the most popular posts here, I think some updating is in order.

First, here's a sweet Halloween piece, painted on commission in 1977: 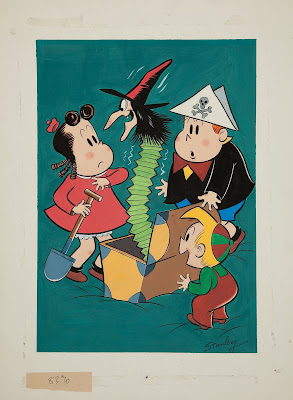 Next is a superior photograph of a piece seen earlier in this posting. The vivid colors really stand out in this better image... 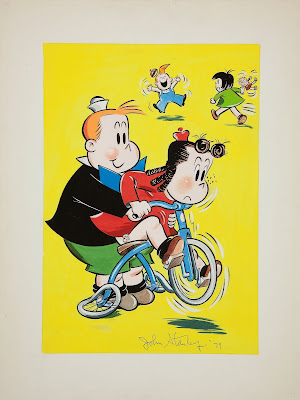 UPDATE #2, May 3, 2012: Two more pieces have recently surfaced on HA's site. This 1983 painting, through vigorous/crude, is quite amusing: 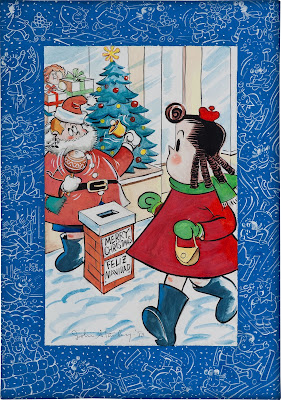 And, currently up for auction (until May 10th) is Stanley's much tighter, more classically styled re-creation of the cover to Little Lulu #22. This painting was used for the cover of the 2005 Overstreet Comic Book Price Guide: It can be yours for probably two grand--rubber cement stains and all! 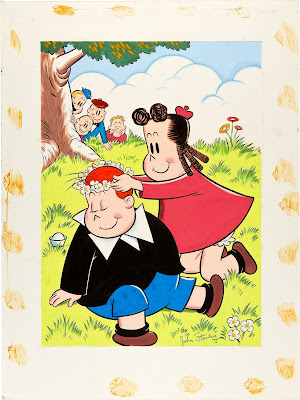 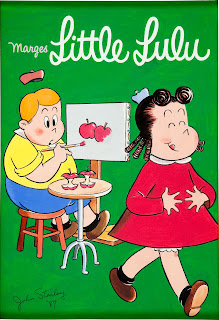 For comparison's sake, and to show how deeply Stanley submerged his cartooning style while working on the Lulu series, here's the 1954 original... 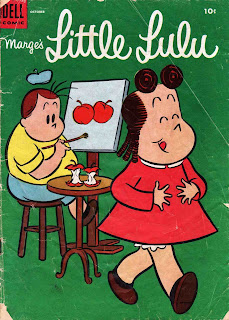 Stanley's presence as a cartoonist is still strongly felt on the '54 version (especially in the figure of Tubby, and in the two apple cores on the table). The '89 remake, in which Stanley goes off-model to pursue his own joy of cartooning, has much more personality, in my opinion.