I know people love it when I post Little Lulu material here. There will be more over the summer.

But on this unusually hot July day, let's dive into John Stanley's deep, dark pool of "Peterkin Pottle." There are only seven of these stories, versus, oh, 3,000 "Little Lulu"s (that's just a guesstimate).


This was Stanley's second wholly original creation for comic books. "Jigger and Mooch," which ended its six-story run with the demise of Animal Comics, at the end of 1947, was Stanley's first self-created series. With "Pottle," Stanley made greater strides towards the development of his own distinctive cartooning style.


As I've noted before, "Pottle" is a troubling, somewhat flawed series. Its main character is almost avant garde in his un-likability. Stanley himself became aware of this, to judge by the character's changes over the seven-story course.


Pottle is an odd man out--we neither sympathize with or abhor him. He is not bright, attractive, or in any way accomplished. His status in the junior politics of playground and schoolroom is dicey at best. Other "normal" kids tease him mercilessly; teachers and adults regard him as a Special Ed candidate.


Only one other child, the girl Pam, sees anything behind his dull, impassive front. As the series develops, she becomes Peterkin's all-important Voice of Reason. In the story you're about to read, Pam comes to Peterkin's defense against a gaggle of street hooligans. This would be humiliation for most other male characters, real or fictive. To hapless Pottle, Pam is the only way out of the world's abuse, and the only life-line of hope in his world.


Peterkin chooses escapist daydreams as a way out of reality's vexations. These fantasias are usually spoofs of the tropes of popular culture. This story sort-of alludes to E. C. Segar's Popeye. More accurately, it suggests the animated version of the enigmatic seafarer, in which the consumption of spinach is a save-all for any social awkwardness or status threat. Popeye's spinach intake brings not only strength, but social skills--it may transform him into a world-class tap-dancer, or intellect, or artist.


In this story, Stanley deflates the inherent absurdity in such wish-fulfillment fantasies. Well, read it and see for yourself... 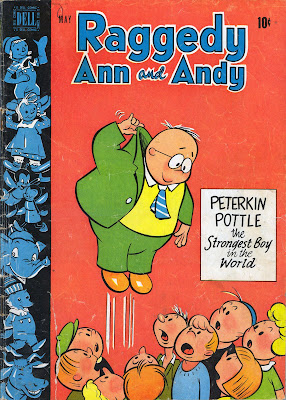 Stanley's covers for these stories are always charming and stylish. Now onto the story within... 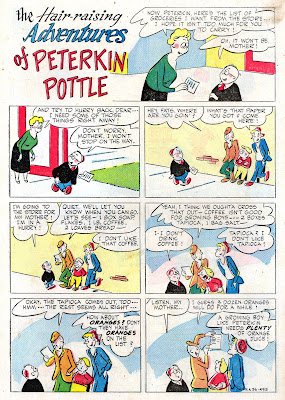 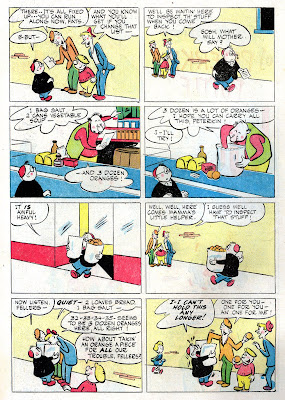 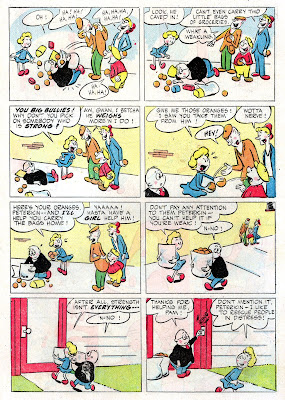 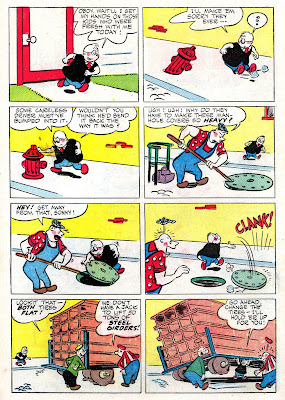 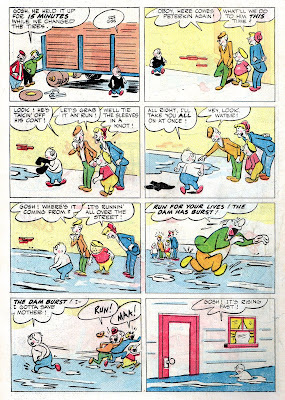 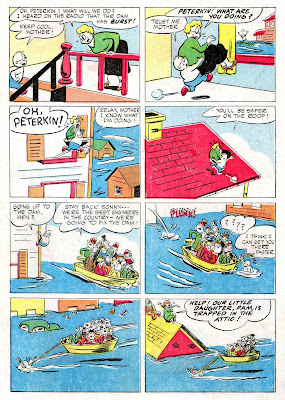 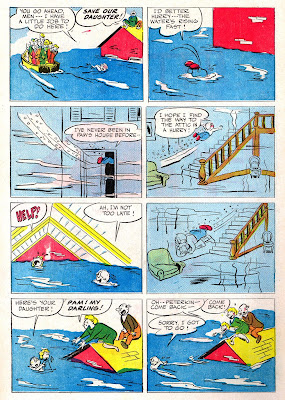 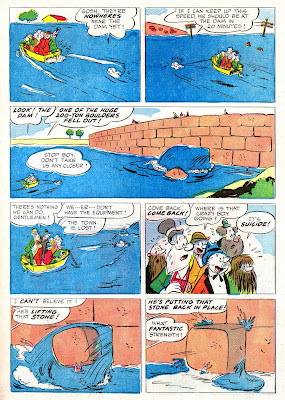 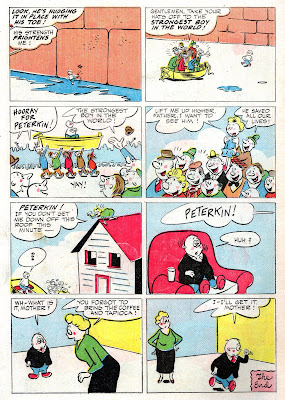 Peterkin mutely accepts the world's hostility without complaint or reaction. Even his one friend, Pam, writes him off as a contender as she helps him home with the groceries: "You can't help it if you're weak!"

The social abuse that sparks the episode has a silver lining. The gang of kids who tease Pottle, delete items from his mother's grocery list, and then help themselves to some of the three dozen oranges they add to it, leave an emotional impression on the poor kid. Pam's comment shores up this obvious shortcoming in Pottle's being.

Small wonder that his OJ-fueled daydream would star him as a pre-pubescent (albeit pudgy) Hercules--a "perfect kid" who saves his hometown from death by flooding. Dream-Pottle is paraded in the streets as "the STRONGEST KID IN THE WORLD!"

Sadness invades this power fantasy. Pottle's score-settling with the street-kids never happens. A flood interrupts the only chance for revenge this poor soul might have. Peterkin heroically drops his grudge for the good of the townsfolk, who do laud him.

In the course of his heroic rescue, he saves Pam and her family from drowning. Peterkin notes to himself, as he swims through their submerged home, "I've never been in Pam's house before." This is a bittersweet piece of information, and leakage of his real life into his fantasy world. That even his best friend won't invite him into her home is a sad detail.

The celebration by the grateful townsfolk (and Pottle's dream) is shattered by his mother--whom Peterkin has stranded on a roof. This down-note transitions us and Pottle back into the mixed bag of reality.

The story's conclusion is heartbreaking. Pottle's mom notices the two things the rowdy kids nixed from her shopping list. She sends him back out to buy that coffee and tapioca. Although we're spared its depiction, we know that he will cross those bratty boys again, and get more emotional/social abuse. Fully awake, he realizes that he's the same sad sack he has always been, and that there is little hope for change in his social status.

This is highly sophisticated emotional material for a "kiddie comics" story. I would imagine that the readers of "Peterkin Pottle" who were anything like the character felt the pain and frustration evident in these stories. I can't imagine that sensation making faithful readers out of any of them. These stories are a mirror, reflecting the uncertainties and incapabilities of the reader ten-fold.

Peterkin does not engage in genocide in this story, thank goodness. What happens to him contributes a little bit to what has been called "the death of the heart." That deep sense of self-loss makes these stories rough going, despite their visual and verbal mastery of the comics format.
Posted by Frank M. Young at 10:02 AM

I love the Raggedy Ann comic, thanks for hipping me to an issue I hadn't seen.

I really like the PP stories, but I can't help noticing that the bullies who tease Peterkin never recieve a comeuppance.

I like the cover with Peterkin Pottle. That's a nice Golden Age cover. I also love your New Funnies button photo! I'm a fan of New Funnies and Walter Lantz material.