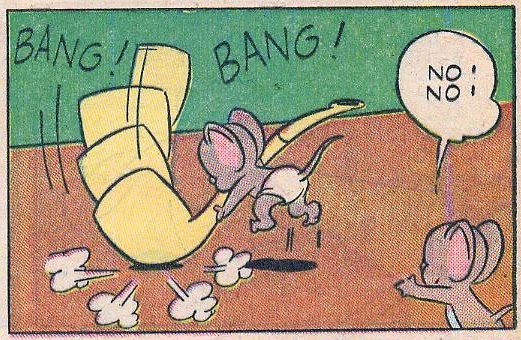 
This last "Tom and Jerry" of 1946, so redolent of his growing wit and confidence, sits somewhere in the middle, leaning toward the "better" side of the bell curve. It's an example of a streamlined, bold approach to comics that Stanley would perfect in the 1960s, and set aside for the entirety of the '50s, as Little Lulu and Tubby demanded a consistency that fell somewhat outside of his personal preferences.

This attitude can be seen in some of Stanley's "Jigger and Mooch" stories, for Animal Comics, and in a string of one-page "Woody Woodpecker" gag pages for 1947/8 issues of New Funnies. This impulse is pronounced enough in his 1940s non-Lulu work that it does not seem accidental or experimental.

Stanley's hand as a cartoonist is felt throughout this series. His work as artist, on "Tom and Jerry," preceded his first work as a comics writer for Western Publications. The first few T&Js he did for Our Gang appear to be written by Gaylord DuBois, a prolific writer for Dell and Gold Key titles into the 1970s.

While DuBois lacked much of Stanley's adroit comedic sense, he can be seen as a mentor figure in terms of story structure and character relationships.

Stanley's involvement as cartoonist in this story is evident, but the finishes appear to be from another artist's hand--or with his considerable help. The finishes somewhat dull Stanley's drawings, but are tidy and serviceable. 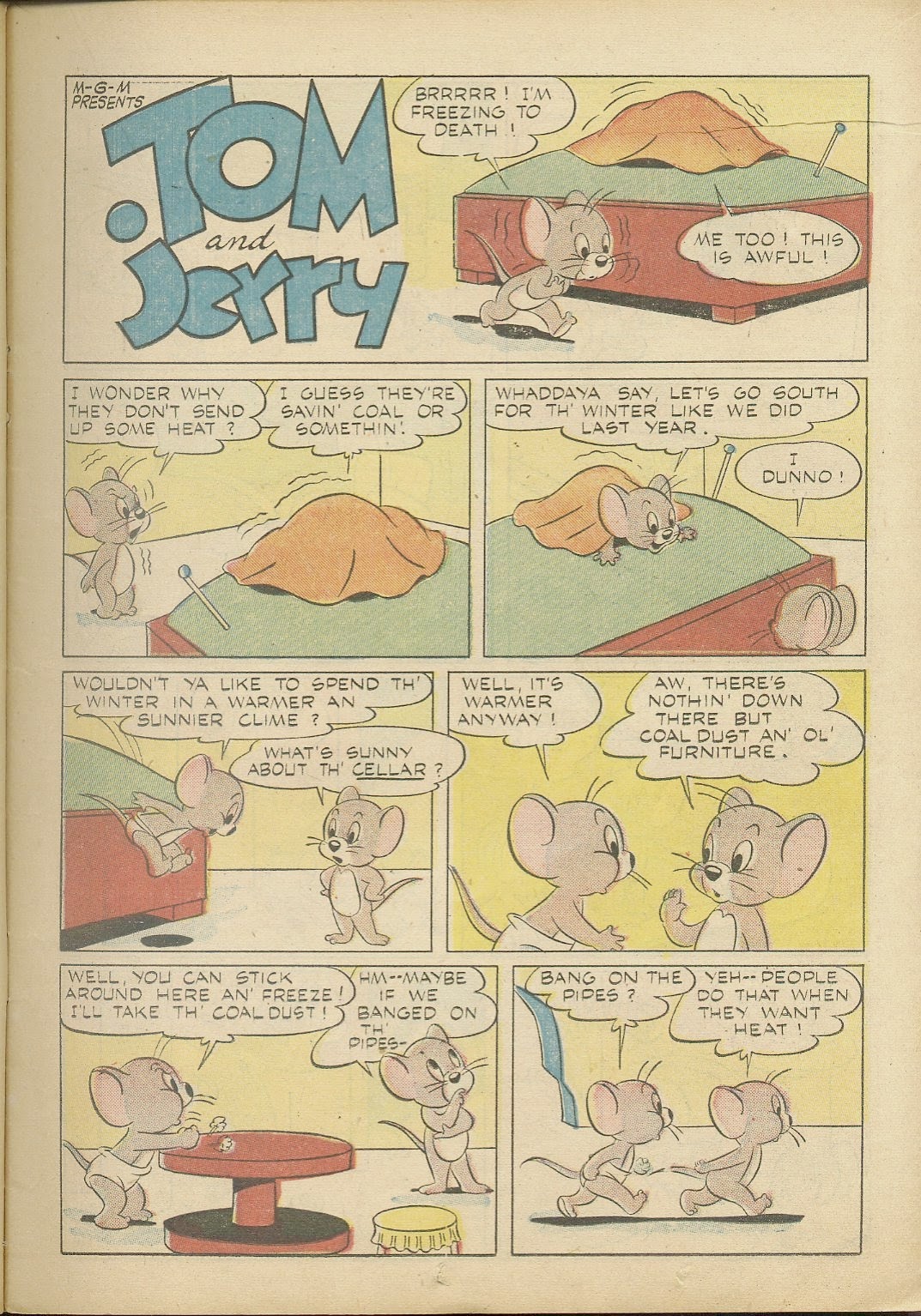 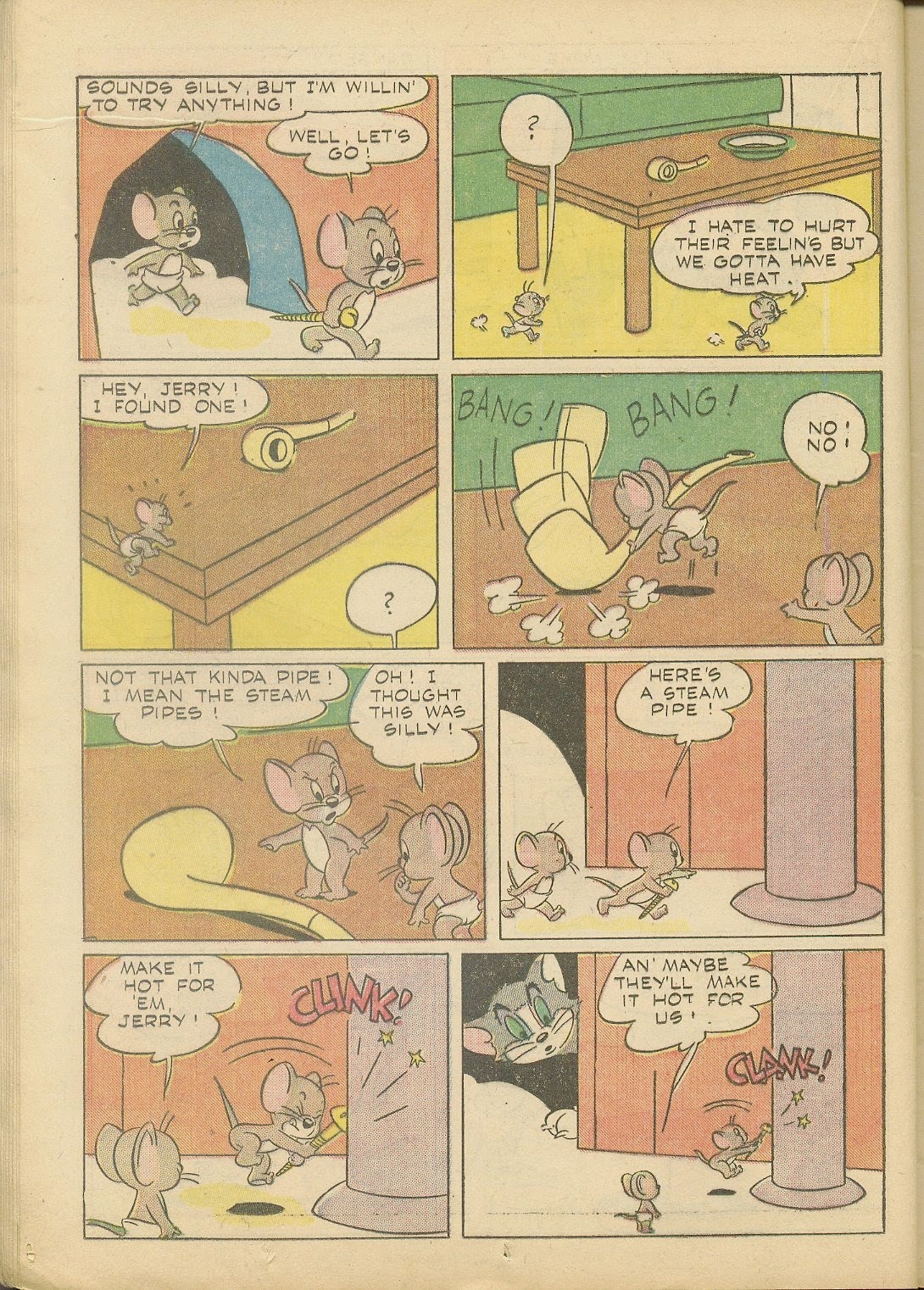 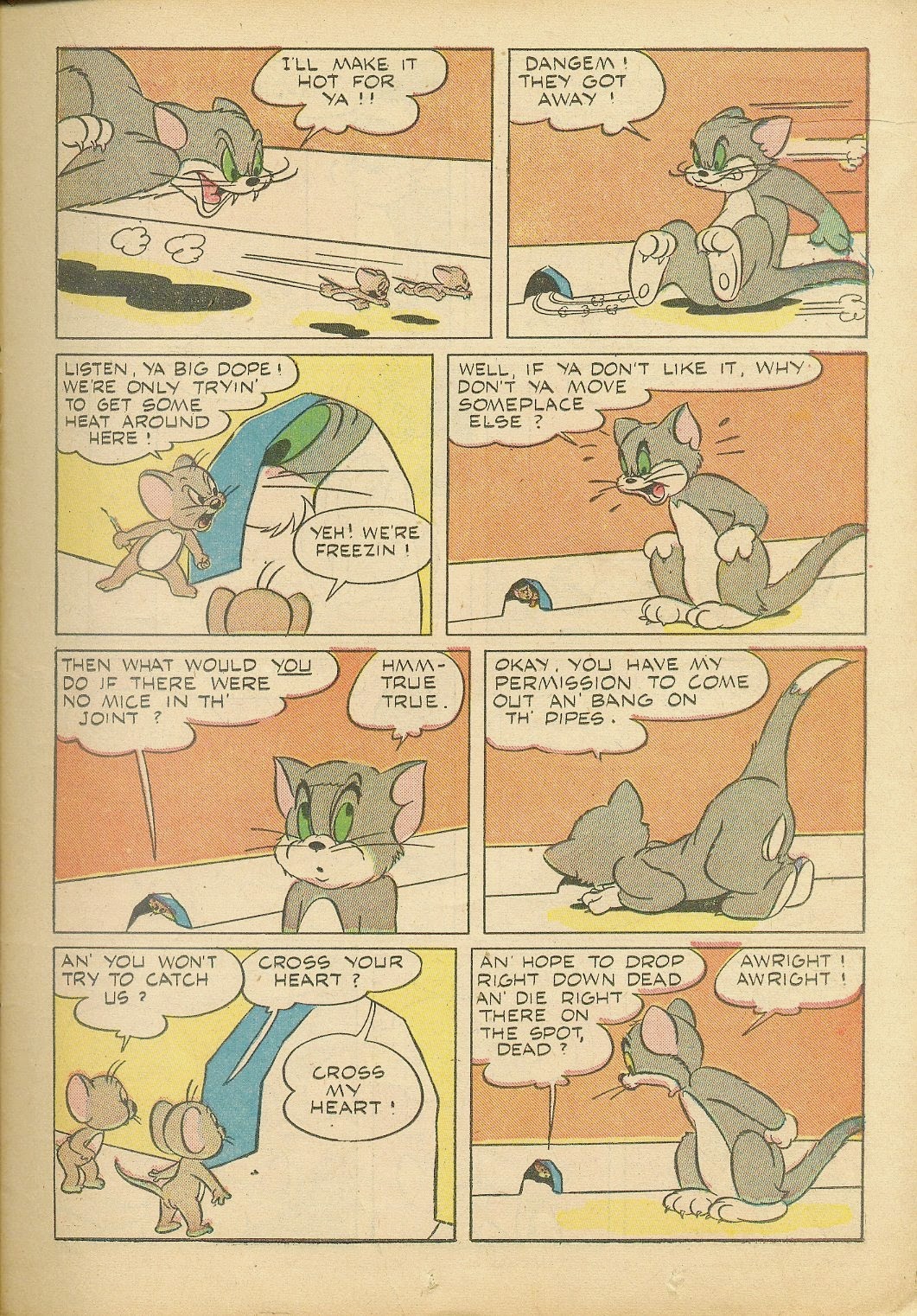 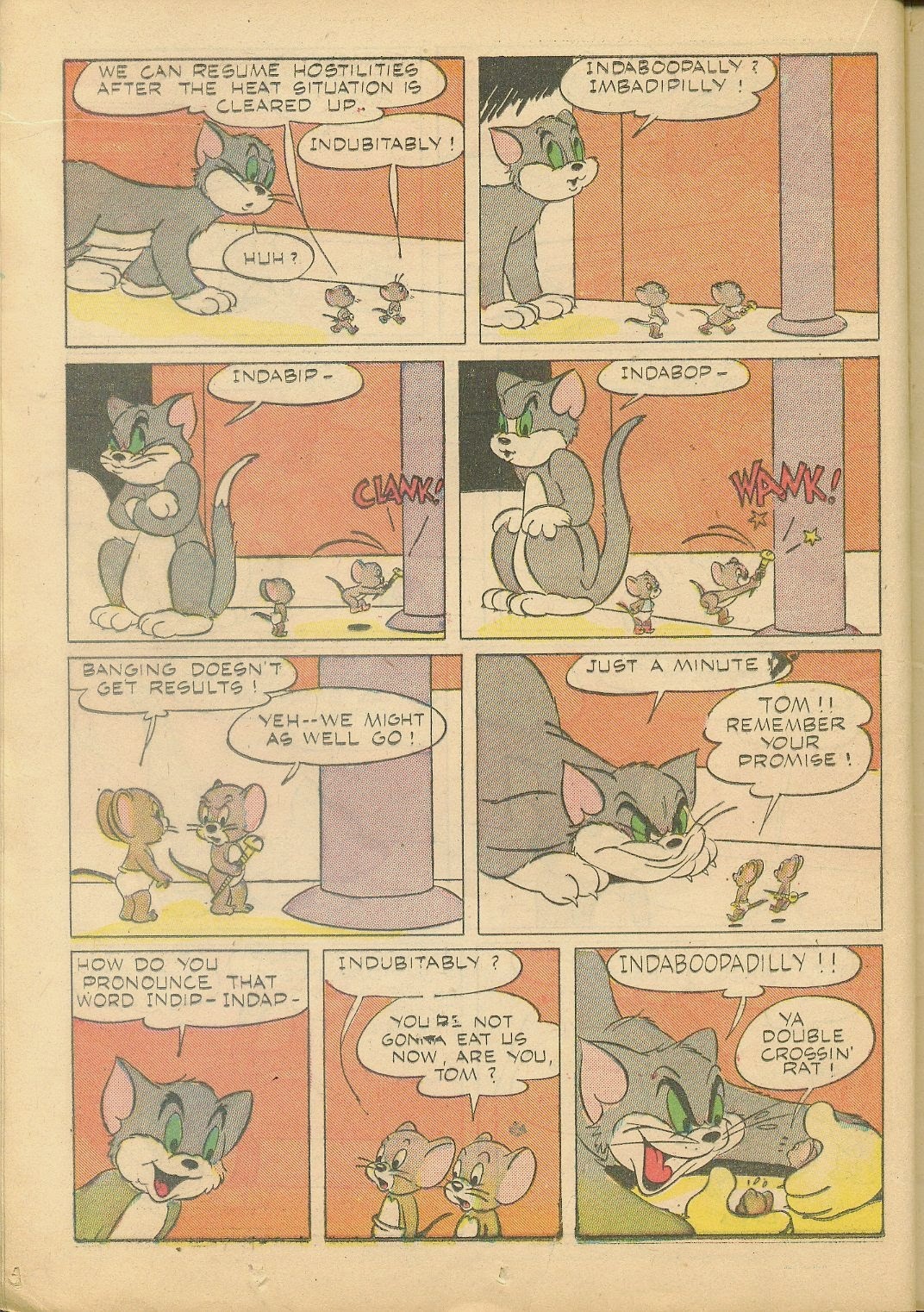 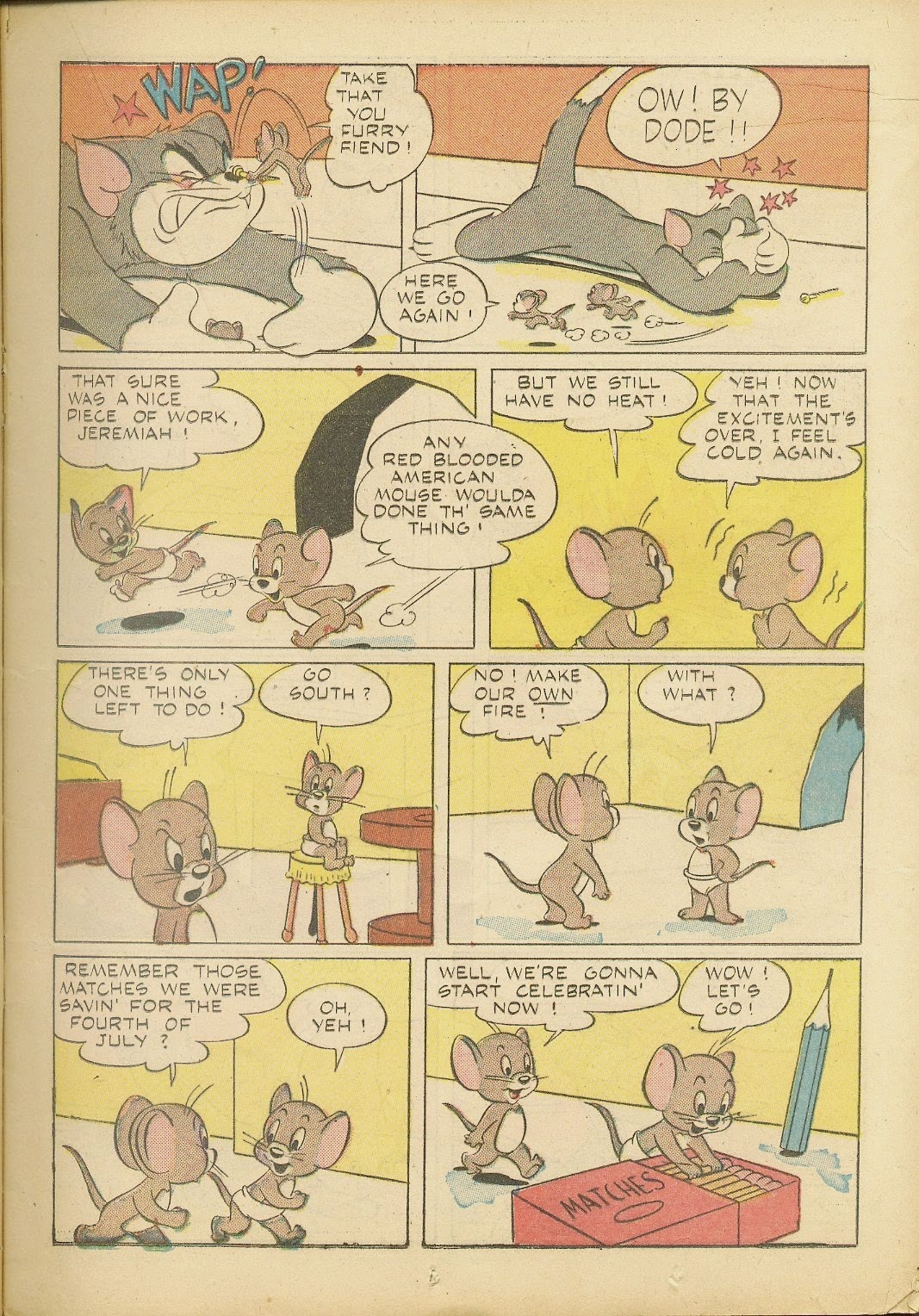 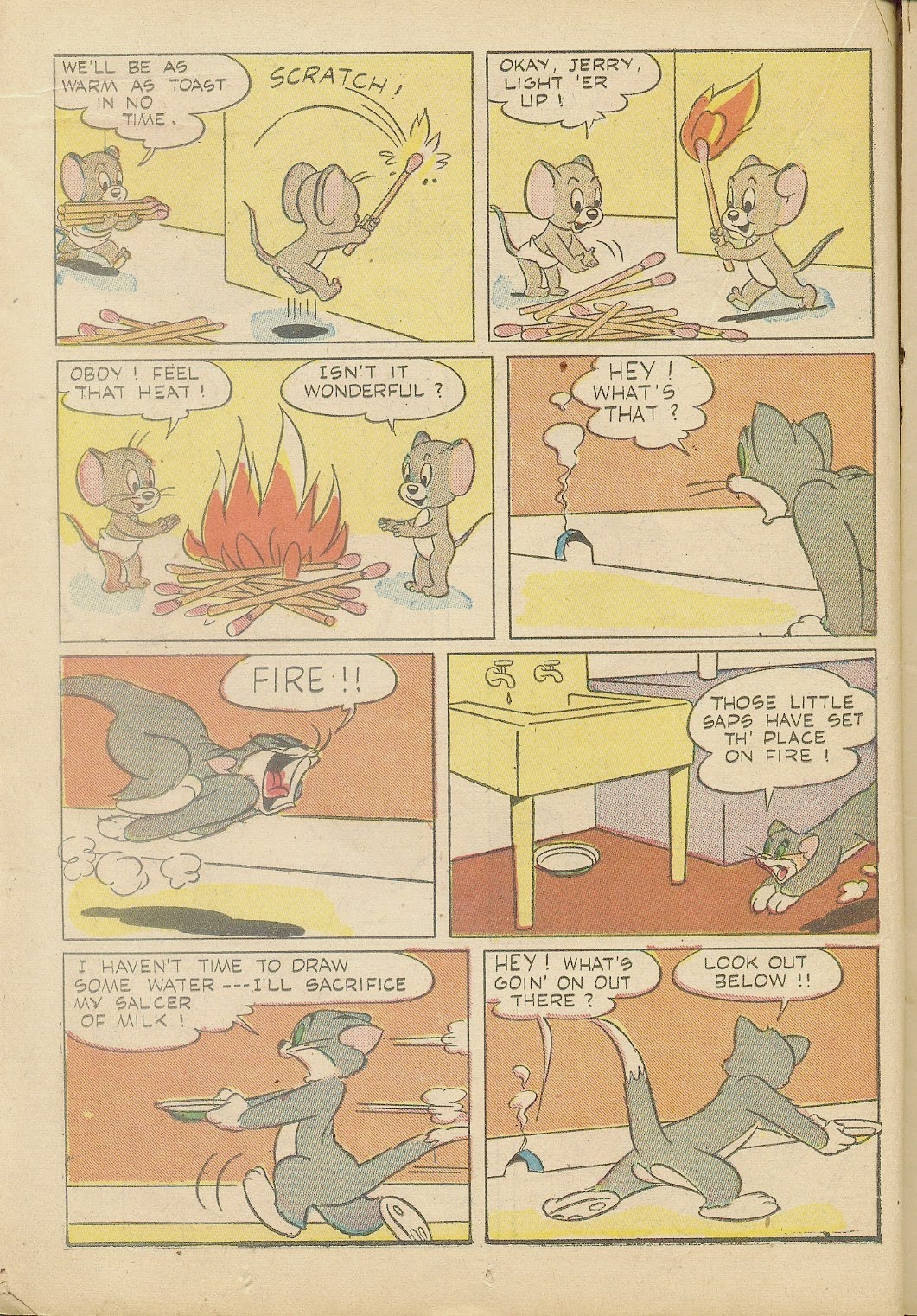 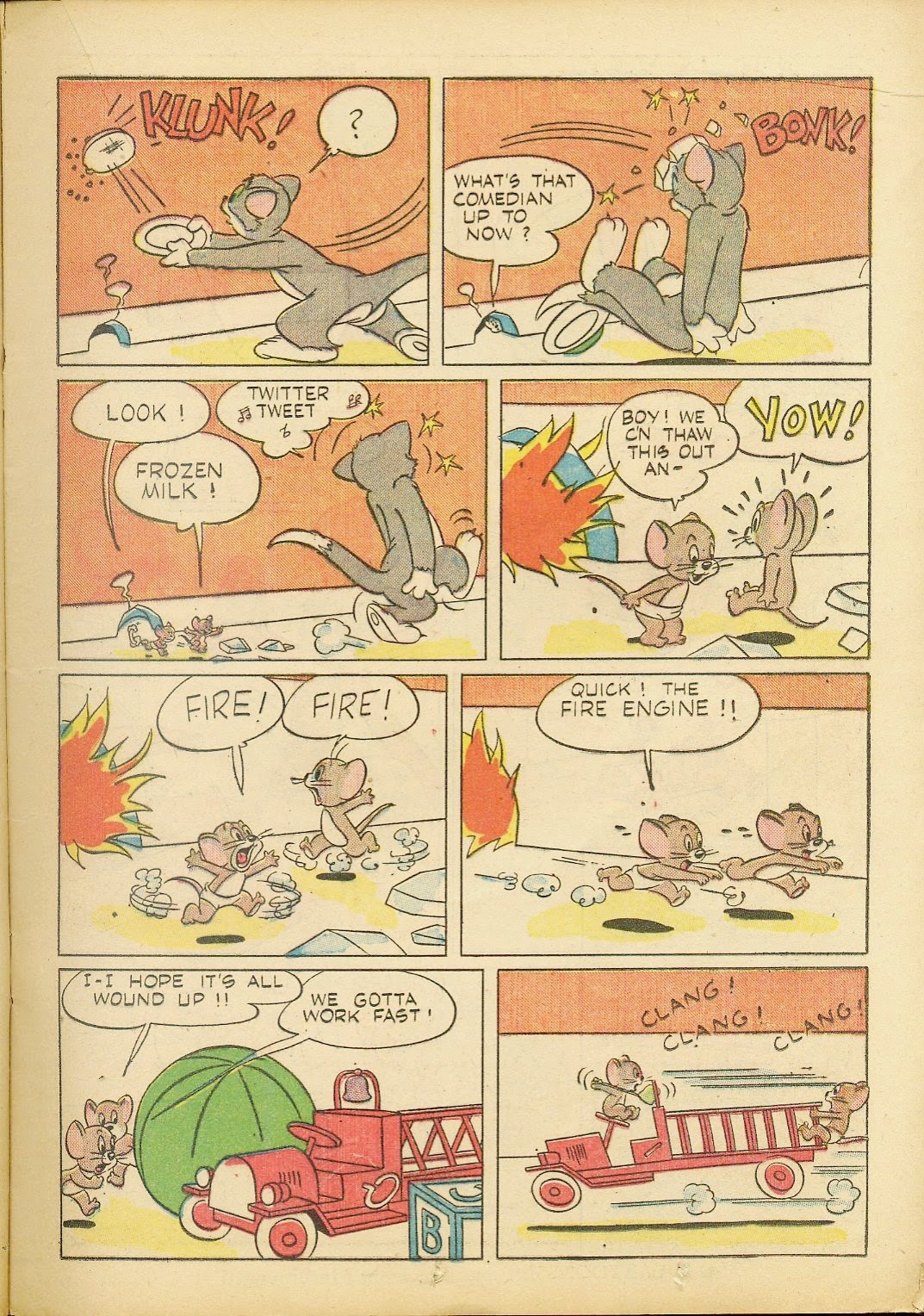 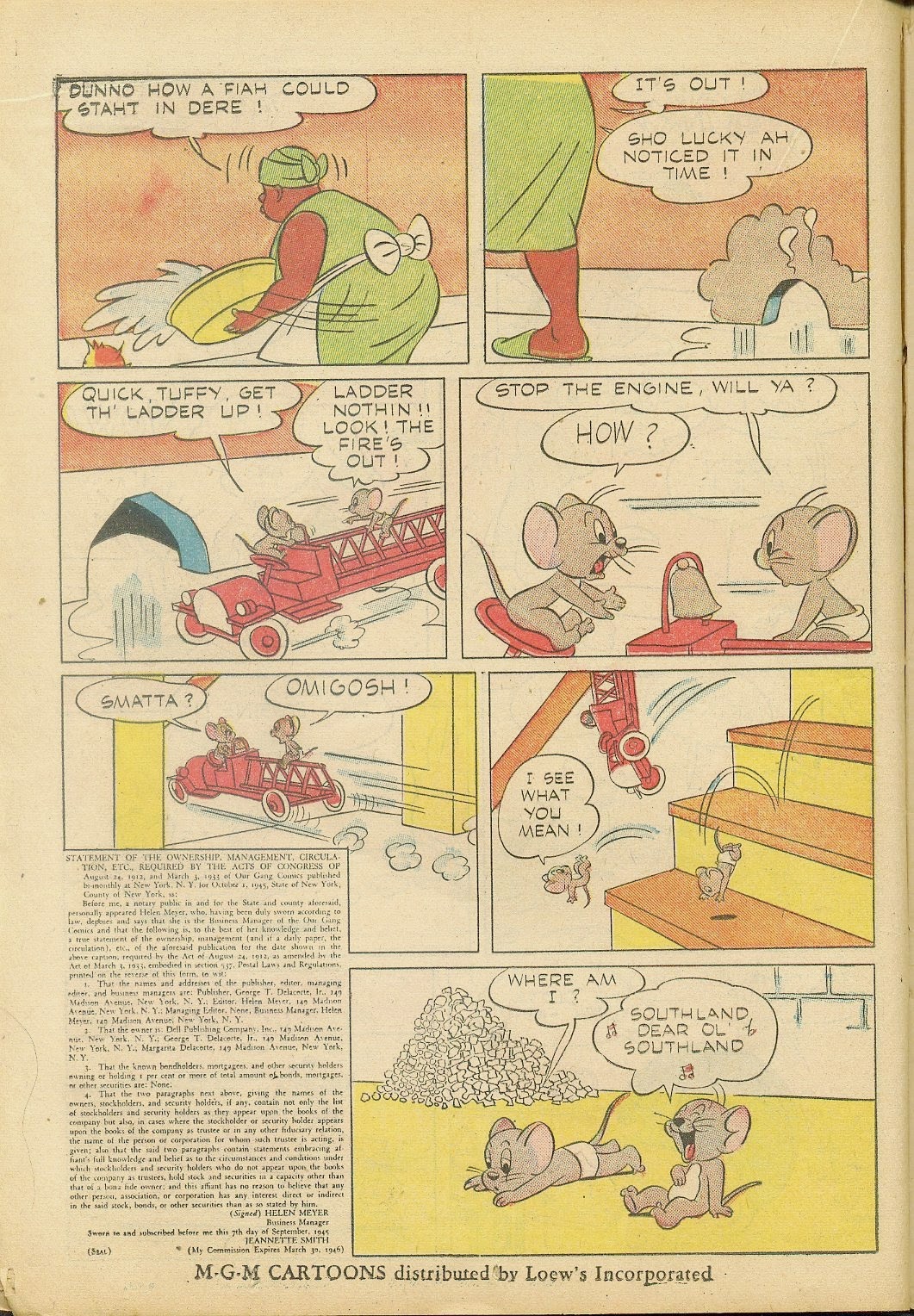 The fourth page of this story is instantly recognizable, to any Little Lulu fan, as John Stanley's work. In no other comics creator's work would the antagonist stop to struggle with word pronunciation! Tom's failed attempts to get a handle on "indubitably" are a cherished moment.

As often happened with Stanley's mass media adaptations, he made the characters and their world over, always for the better. Giving voice to Tom, Jerry and the diaper-clad Tuffy (a creation of the comic book stories who migrated to the lavish M-G-M cartoons), Stanley gave these characters more complex, quirky personalities.

Most importantly, their voices allowed them to stop and take stock of crises and challenges. This is a hallmark of Stanley's comedic vision. Stanley's quixotic, self-absorbed anti-heroes would much rather chit-chat about catastrophe than take ownership of such situations.

Jerry and Tuffy are more pro-active than the typical Stanley protagonist, and thus more prone to violent acts. This may have been dictated by the source material. William Hanna and Joe Barbera's animated series has the violence level of a Herschell Gordon Lewis drive-in flick. Horrific acts of in-your-face mayhem, in big-budget Technicolor, animated with masterful finesse, are the meat and bones of the film "Tom and Jerry."

Stanley's heart doesn't seem in the acts of cartoon violence throughout the series. Though Stanley would later develop an appreciation for physical violence, especially in his 1960s material, he seems happier when the characters just rattle on about their likes, dislikes, and their unquenchable self-regard.

A rich ear for dialect and language informs the dialogue. Stanley fell a distant second to friend and colleague Walt Kelly, in this regard. His use of phonetic spellings, g-clipping and vocal accents is, arguably, more controlled and coherent than Kelly's, and its inclusion adds much flavor to this series.

The last page of the story demonstrates the necessities of the publishing world. That Statement of the Ownership, etc., had to be included. Dell's comics had no advertisements in 1946, so this statement had to interrupt someone's work. It appears this insertion was known in advance. Stanley does his best to incorporate this shape into the story.

Stanley's replacement on "Tom and Jerry" was one of the early workhorses of the American comic book. Tom Hickey worked for several comics publishers in the pre-super-hero era of comic magazines, and continued on, mostly for National/DC, into the 1940s.

Walt Kelly appears to have gotten Hickey the "Tom and Jerry" gig, which lasted into 1948. Hickey's work stands out like a bruised, battered thumb in the pages of Our Gang. Example given: 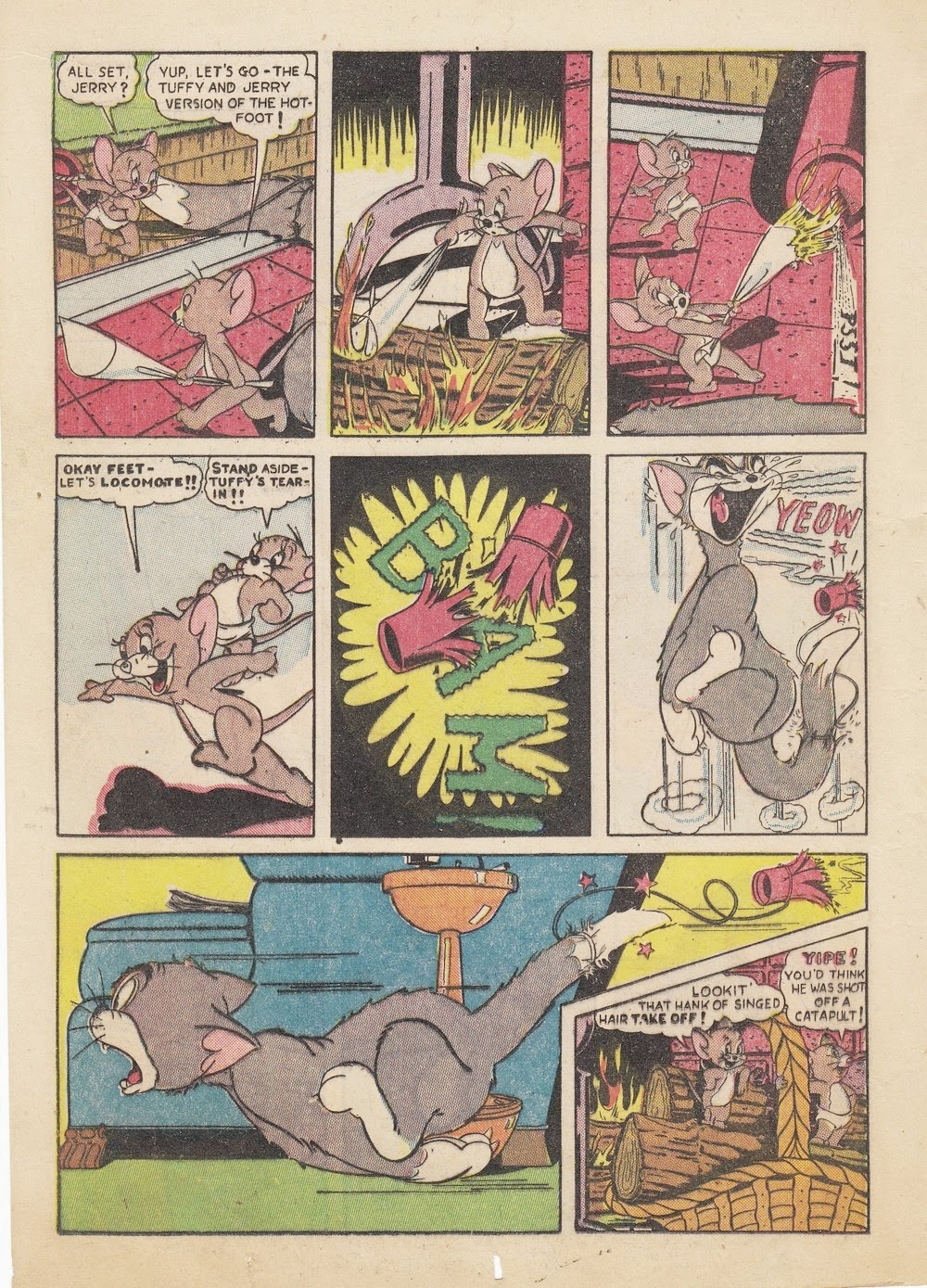 Hickey's eccentric-yet-stodgy style (and genuinely ugly lettering) did not lend itself well to funny animal comics. The light touch of Stanley's version gave way to a vision that seems sweaty, heavy and uncomfortable.

Hickey made the cardinal error of showing the caricatured black maid in the worst light possible: 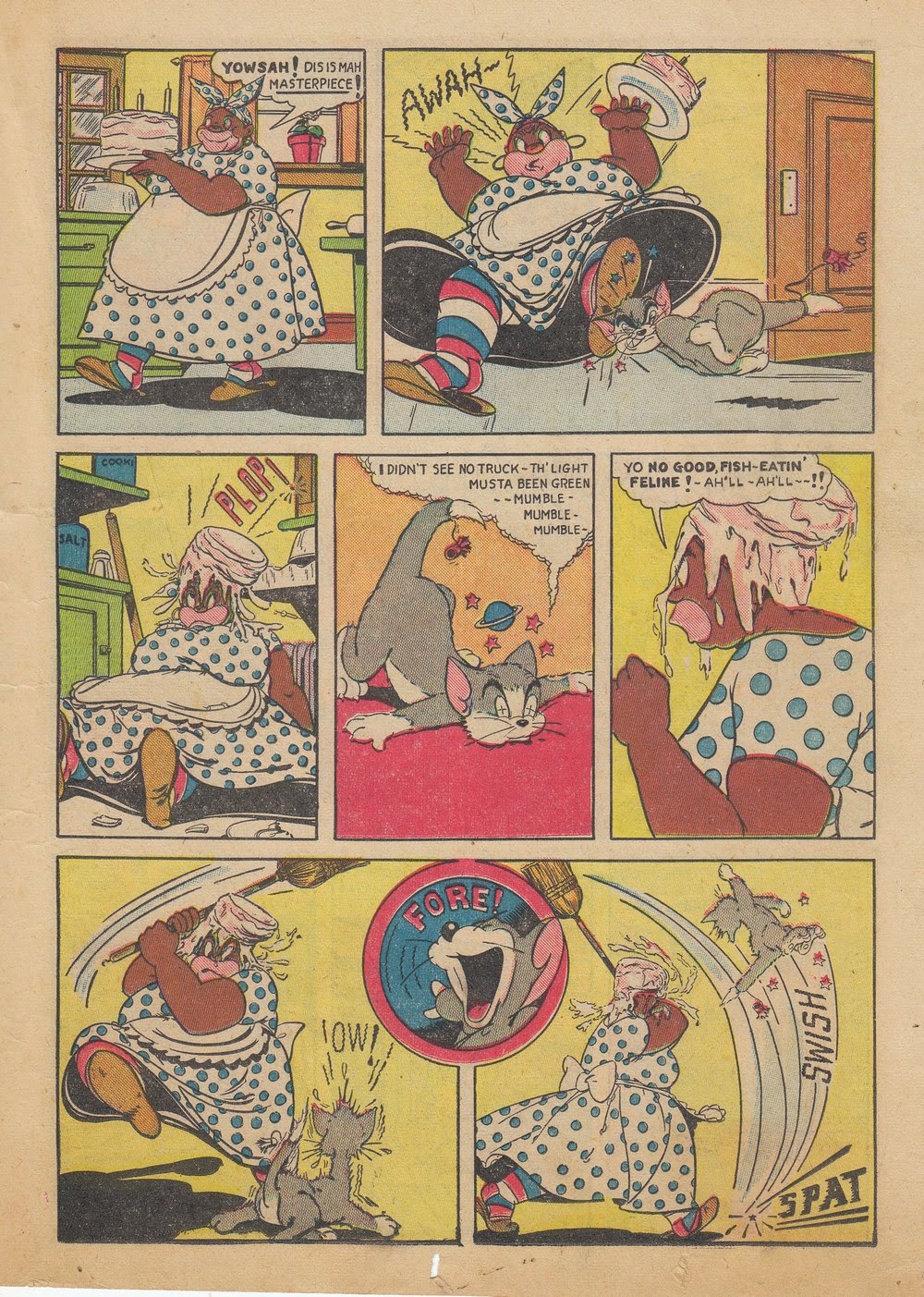 In comparison, Stanley's version of the maid seems tasteful.

Hickey got the hang of the series a bit more, but his work never fit into the look and feel of the other cartoonists in editor Oskar Lebeck's employ. Stanley's return to the series (as writer only) with issue 43 of Our Gang was a welcome respite.
Posted by Frank M. Young at 2:46 PM

Thank you very much for sharing theese lovely comics of Jerry and Tuffy!

They are so cute, carrying each other around, and how the argue. It was a really good comic.

I read alot of comics with them in my youth, in the late 70's and 80's. The story was quite different then, and not for the better, though it was enjoyable too.

I really like Tuffy, how he wears diapers all the time and not trying to hide or being selfconscious about it or anything. Having a big collection of them in personal favouring. And hes little tail shooting out of it ^^

Too sad Stanley couldn't work on Our gang solely.

I hope you find the comics you are missing, and that you will share them too.

Thank you very much!