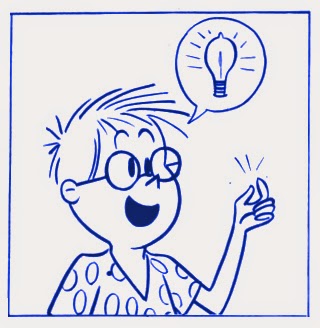 In doing the research for my upcoming 1950s John Stanley bibliography, I was reminded of a couple of curiosities. Among them is the enigmatic filler feature "Knotknee," which first appeared in the 15th issue of Marge's Tubby.

The title already had a secondary feature, "Alvin," which guaranteed its eligibility for special periodical postage rates. I've made mention of this postal law, which is the reason for filler pieces in 1940s and '50s comic books, elsewhere on this blog.

Why "Knotknee" was created is a puzzle. The character does not otherwise appear in any "Tubby" or "Little Lulu" stories. Nor was any attempt made to explicity connect it with those characters. Long before 1956, when this oddity debuted, John Stanley had mastered the art of pantomime comics gags. Little Lulu, from its trial start in Dell's "Four Color" series, is rife with such pages.

Occasional multi-page pantomime stories appear in Lulu, and in earlier Stanley projects such as New Funnies. For a writer as in love with language as was Stanley, his fluency in using mute images to tell a story is a pleasant surprise.

By 1956, the panto pages were feeling a bit phoned in, and "Knotknee," which I hesitantly attribute to Stanley, suffers accordingly. Here is the first page in the series: 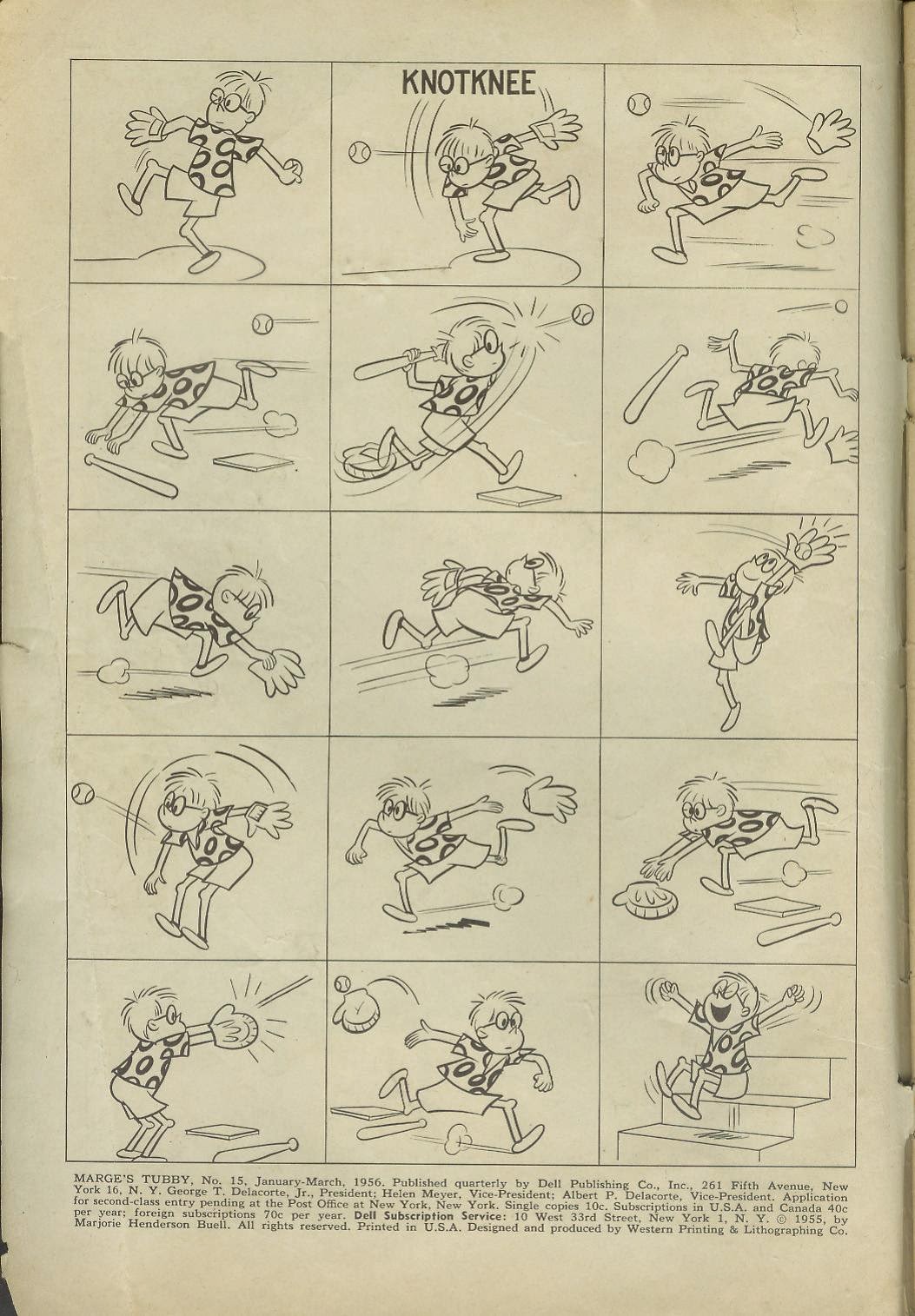 Knotknee's shtick was being very fast on his feet. He was chosen to star in Tubby's one- to two-page text fillers, which are very clearly not written by Stanley. Here is the first text page, from this same issue. 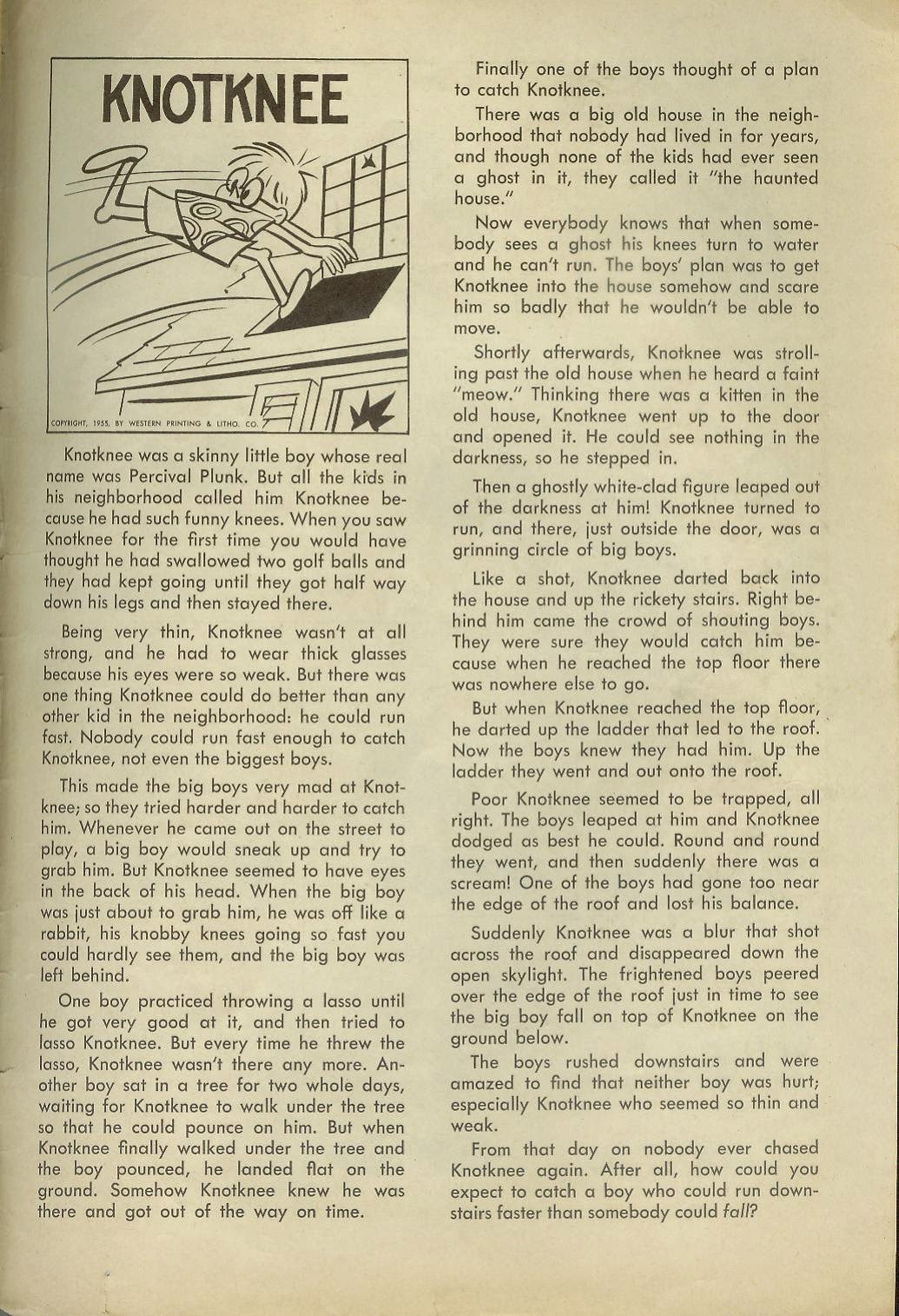 This prose, utterly drained of enthusiasm, typifies the 1950s comic book text filler. You can feel the writer's gnashed teeth in every line.

100% independent of the world of Tubby and his clubhouse pals, Knotknee faced similar interests (sports, girls) and fears (bullying, loss of social status). Thus, these pages line up with the other contents of the series, even tho' they seem mutually exclusive.

That "Knotknee" is drawn in the Marge Buell style blurs the boundaries further. It might have been jarring to readers to have a filler page drawn in a different look and feel. The feature, as it stands, must have puzzled Tubby fans (those who noticed, that is).

Here is a selection of other "Knotknee" pages. The feature ceased, as a pantomime comic, with Tubby #31, but soldiered on as a text feature. 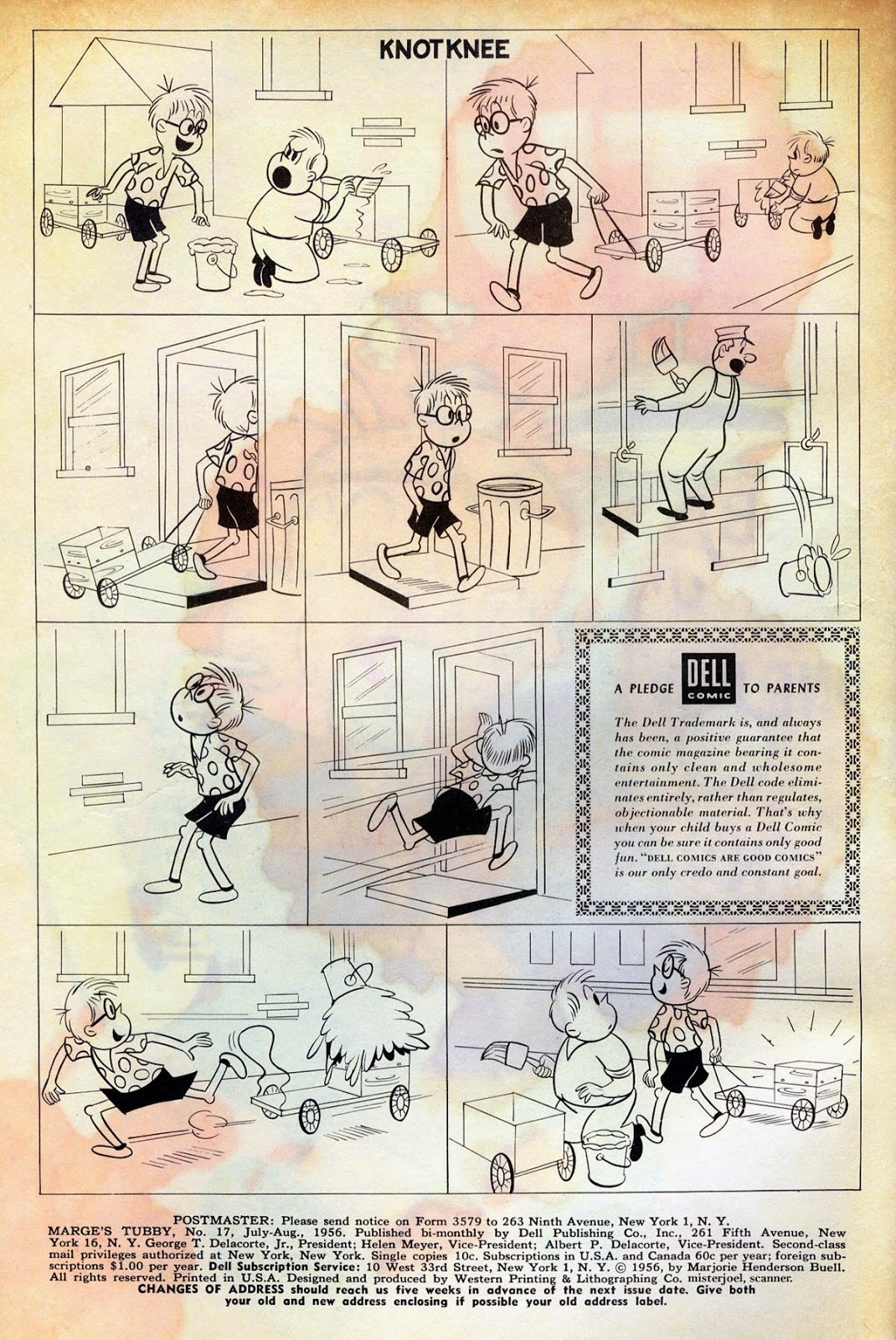 When that Dell Pledge to Parents is wedged into a page, its non-importance is guaranteed. 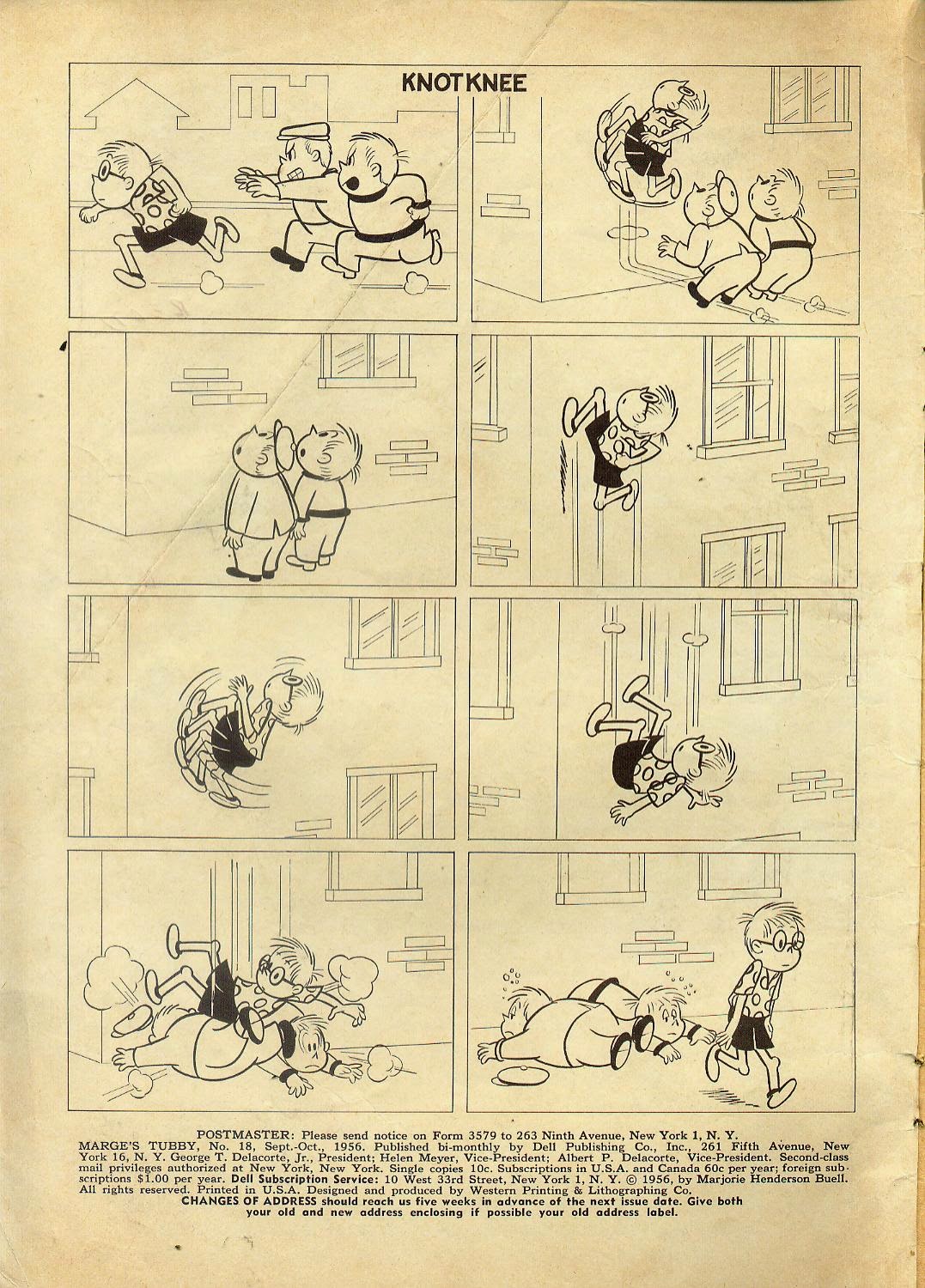 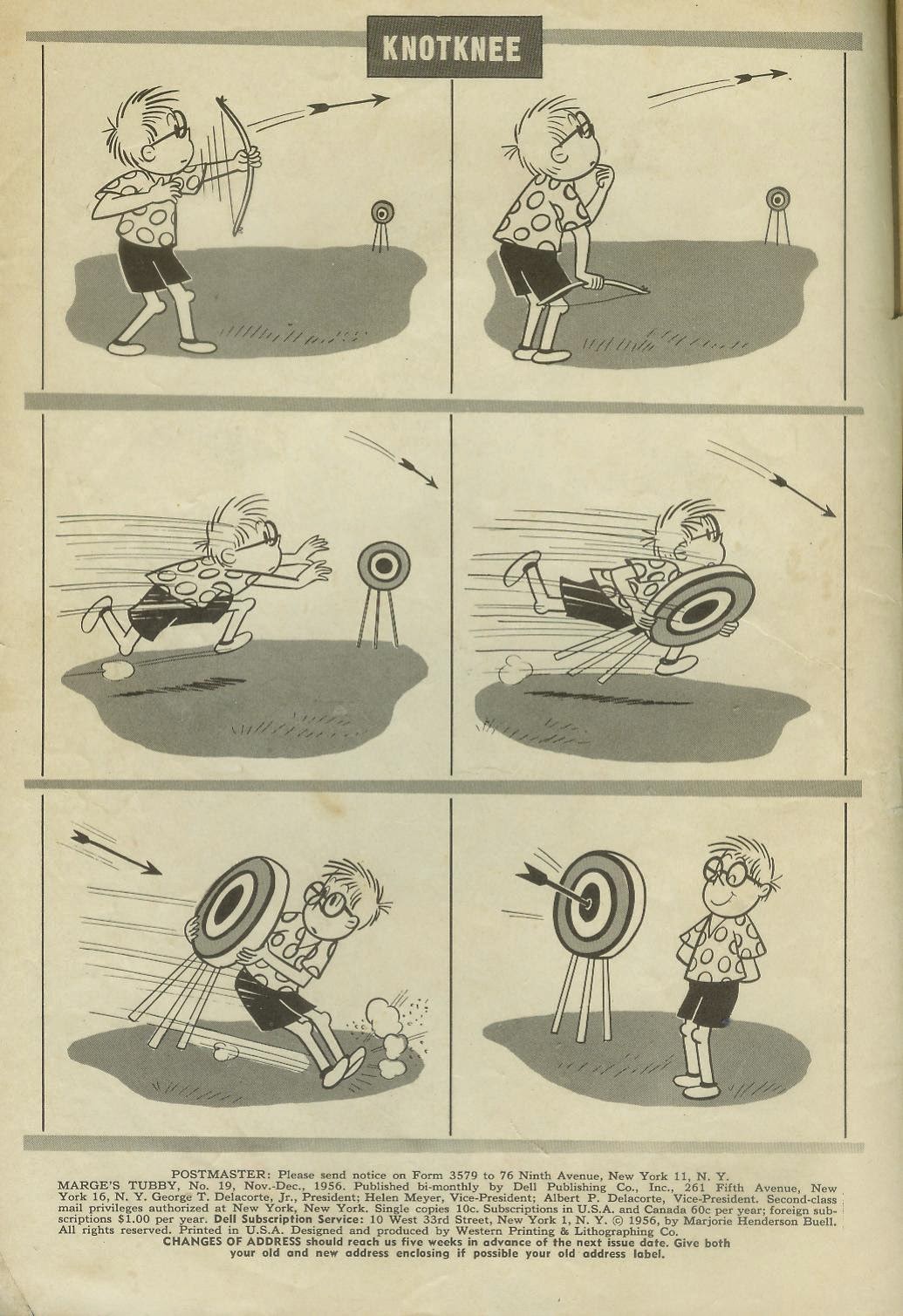 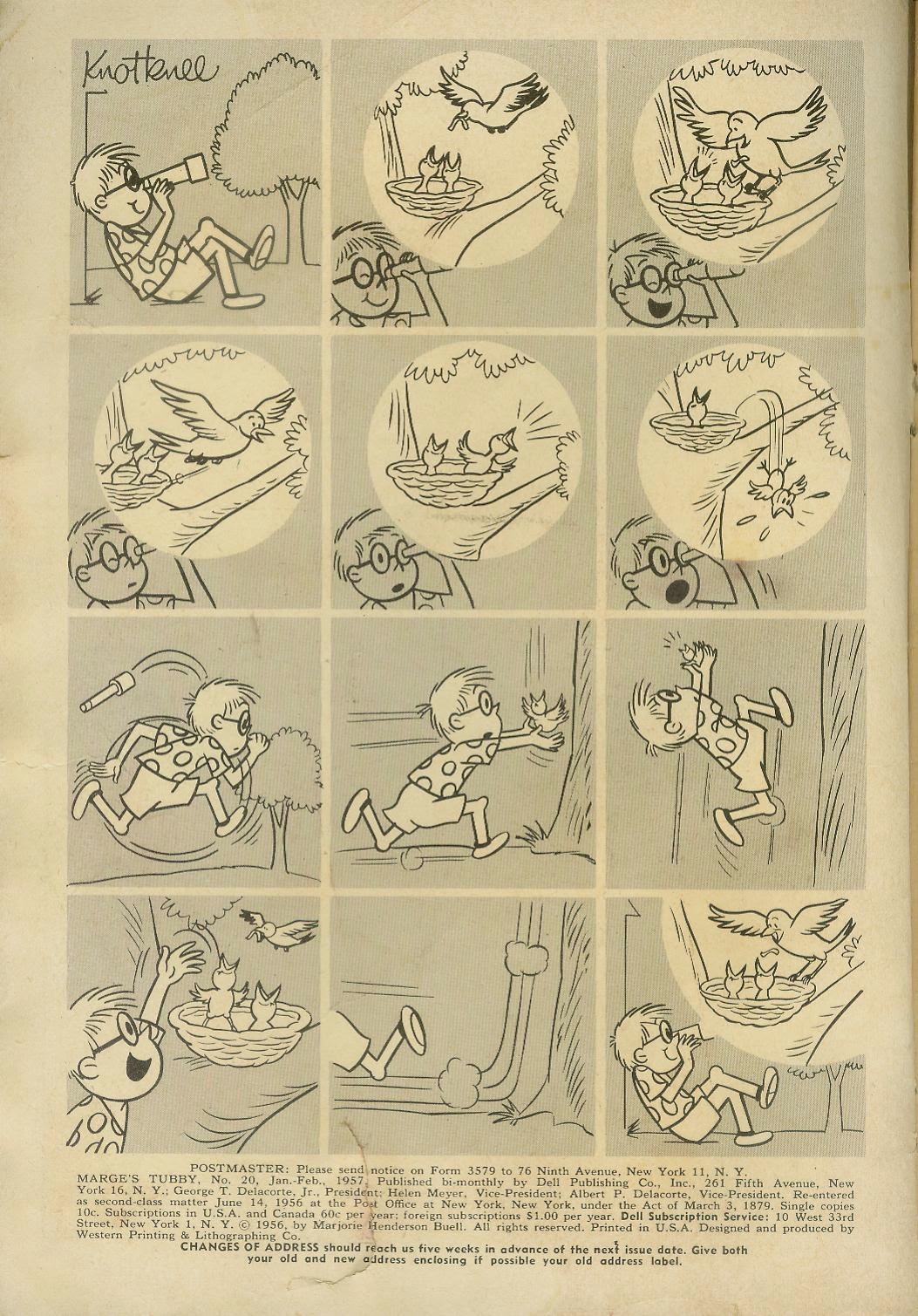 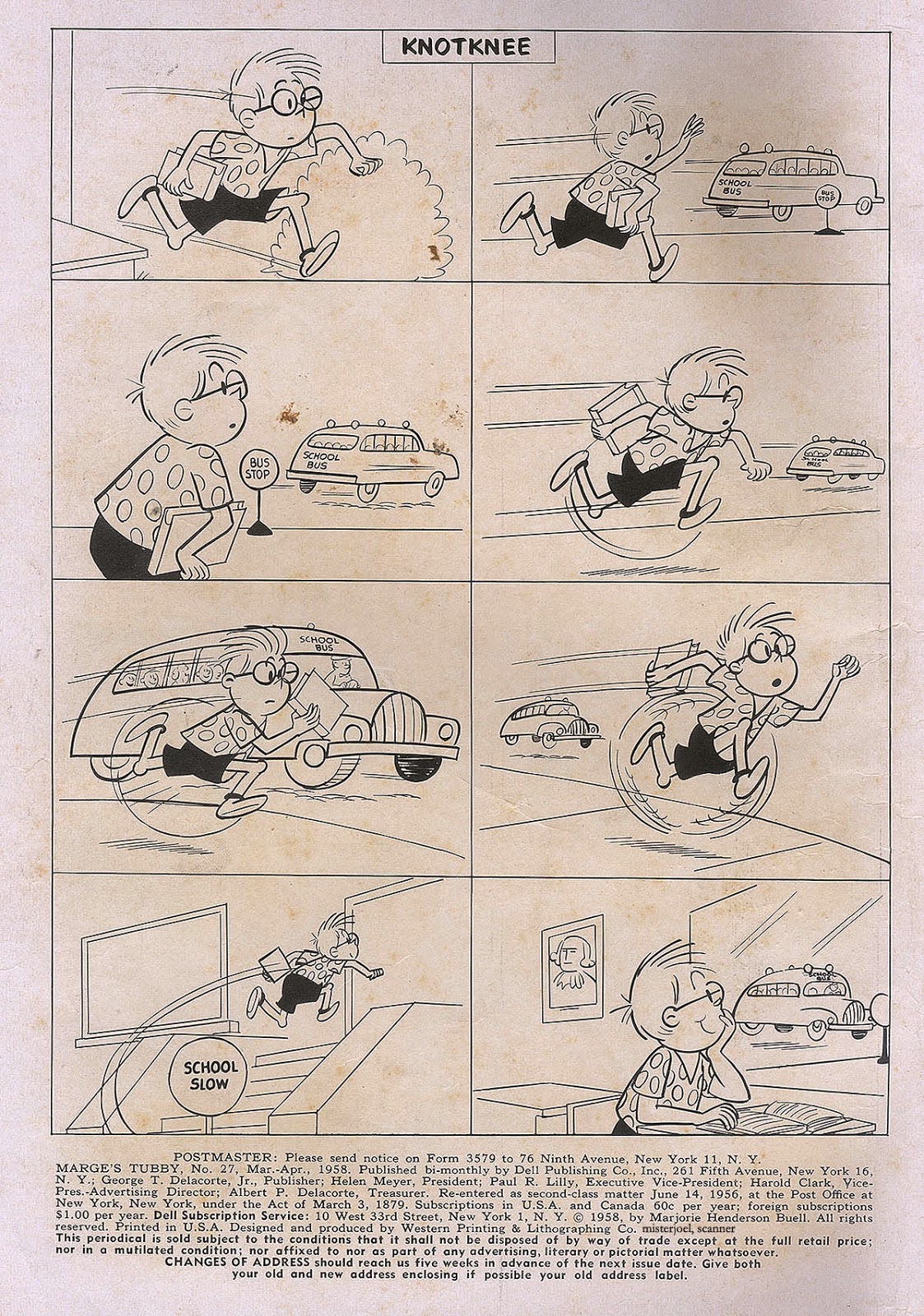 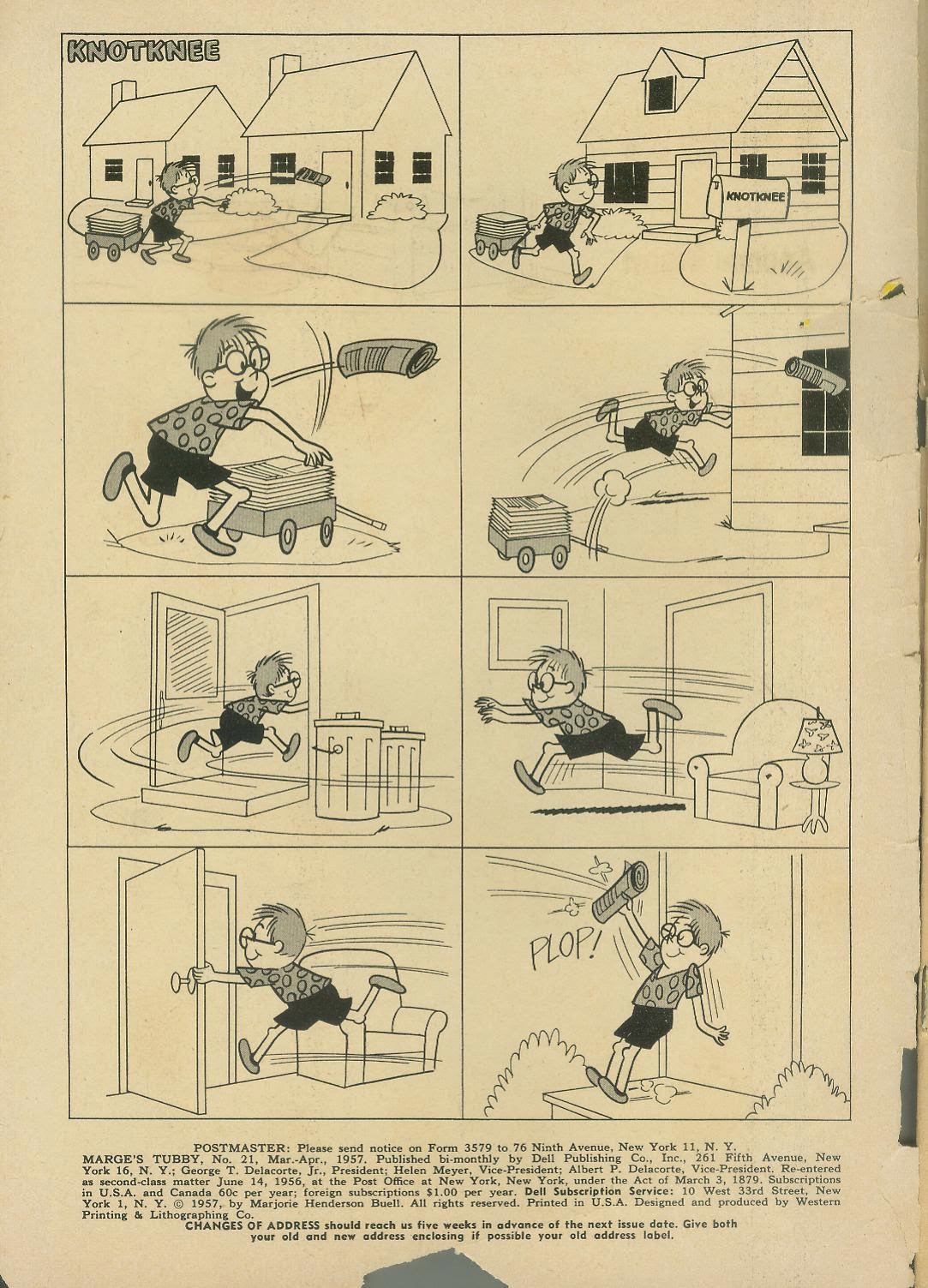 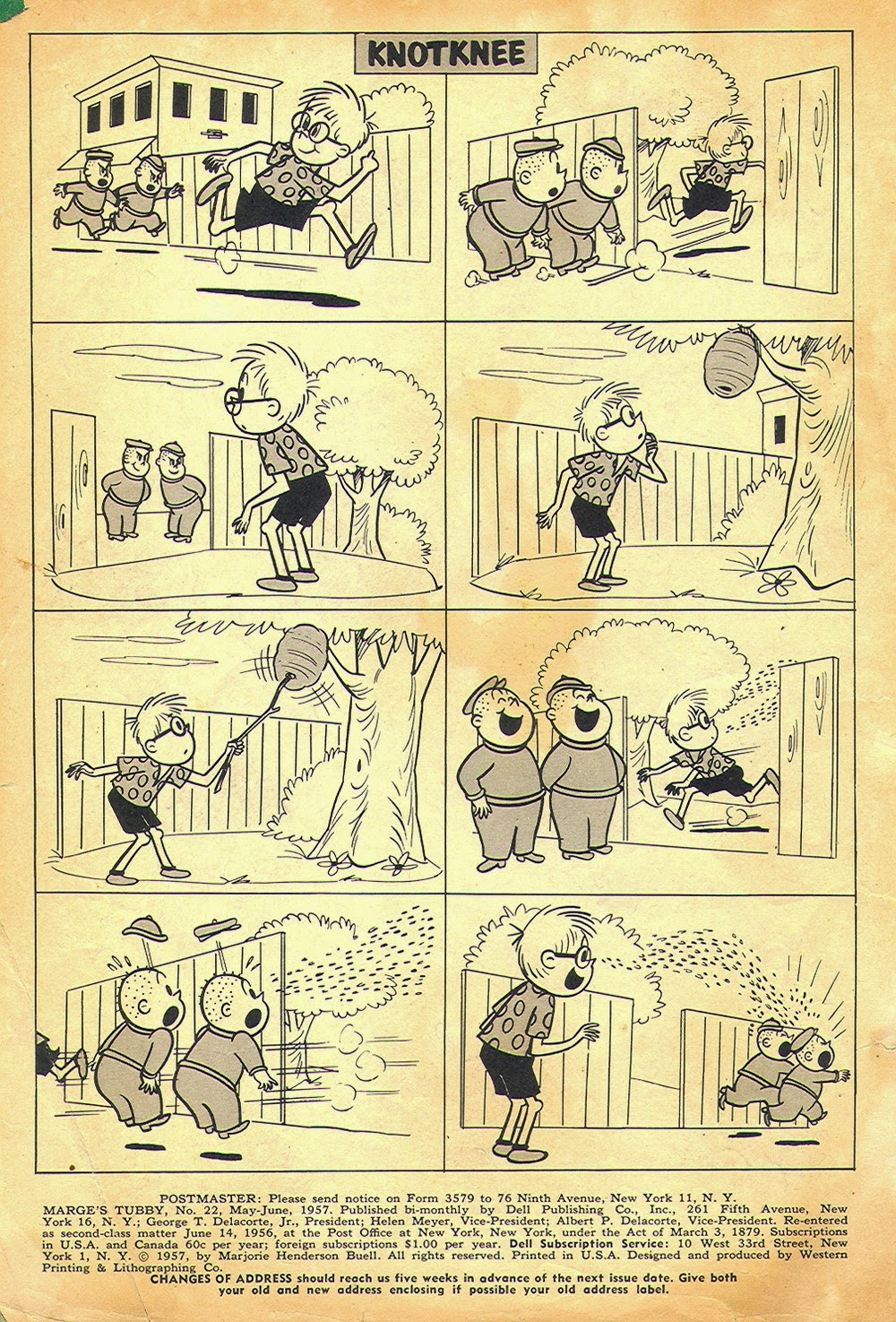 The feature broke from its muteness just once, in issue #24 of Tubby: 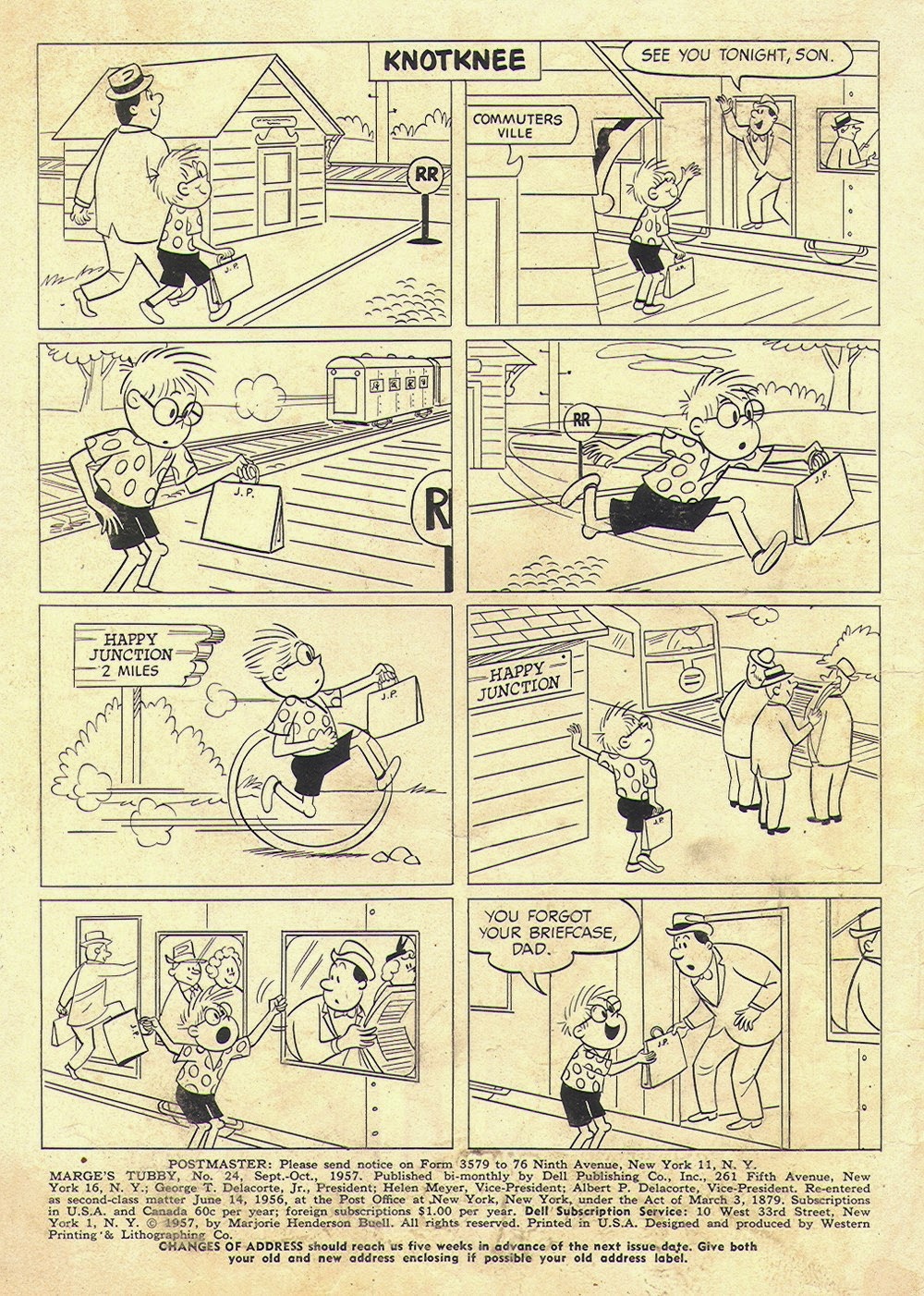 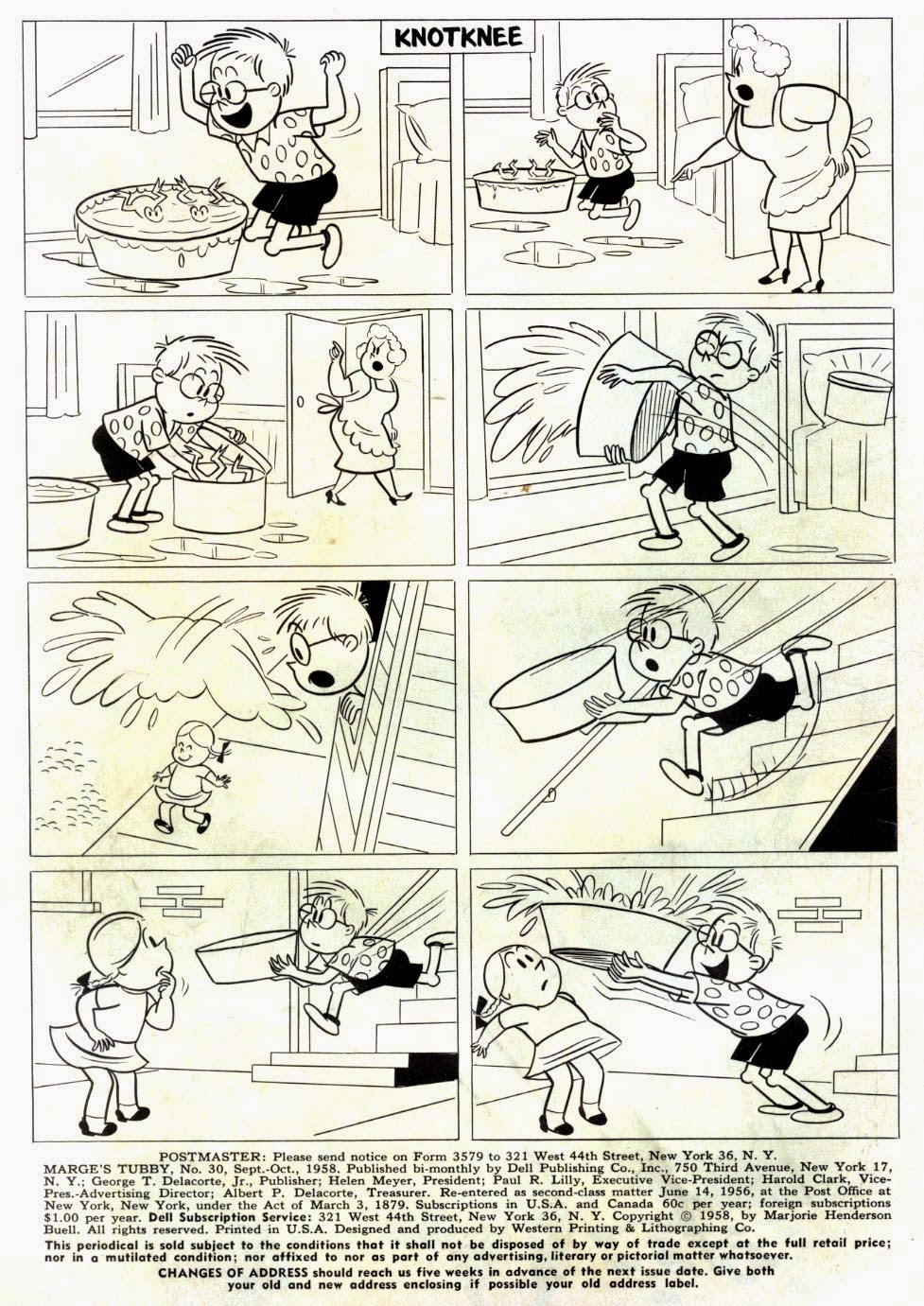 This is the last episode in the comics version of the feature: 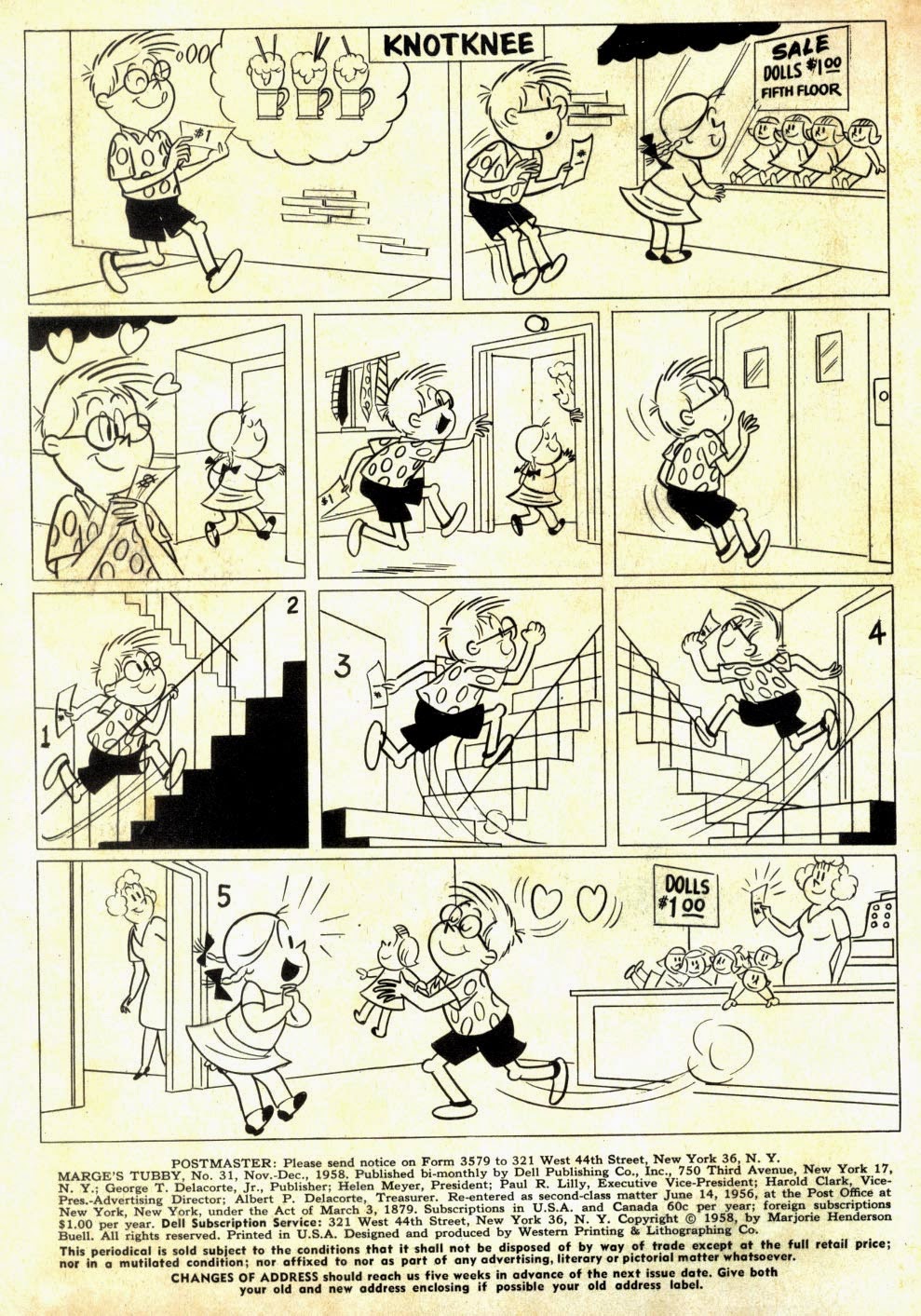 Though a one-note concept, "Knotknee" has some occasional faint charm. He was never destined to have his own series, or speak beyond the one line given him in Tubby 24. As the most obscure and little-known creation of John Stanley's Lulu-Tubby tenure, "Knotknee" rates a brief mention here.

I'm about halfway through the '50s bibliography, slogging through the task of synopsizing each "Little Lulu" and "Tubby" story of the decade (along with all the other stories and series with Stanley's work). I'll be glad when I don't have to type "Witch Hazel" again for awhile.

More in this occasional series of post-posts sometime soon.

Hi Gabriel! How nice to hear from you again! I hope life and work are being kind to you.

Frank -- excellent post, as always. And thanks -- it's nice to get the lowdown on Knotknee! Can't wait for the newest addition to your Stanley Bibliography series -- a must have for comics history fans. Have you made these available as Kindle downloads?