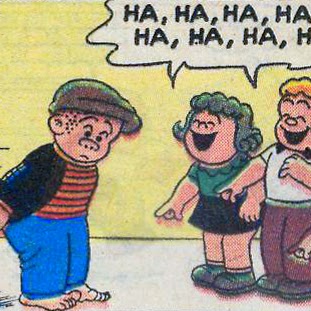 I warned you that I'd come back, from time to time, after "officially" ending this blog. As I make new discoveries, or find new information that either confirms or corrects my past presumptions, this blog will remain on life-support.

If/when I complete and publish the John Stanley bibliography for the 1950s, it will consist of 11 years of stories. Near the end of that era come two small surprises from a semi-likely source.


For years, I've suspected that Dell's Peanuts series might hold some John Stanley material. No one had bothered to scan these comics and share them on the web until last month. Said it before, saying it again: kudos to the folks who scan old comics and remove them from obscurity and inaccessibility. Their work is a powerful help for today's comics scholars.

In a just world, Stanley might have been assigned Charles Schulz's characters, rather than the cast of Nancy and Sluggo, in 1959. Schulz understandably wished to keep the comic book version close to home. His friends Jim Sasseville and Dale Hale wrote and drew the new material, in the spirit of the mega-popular daily strip. You can read an interview with Dale Hale about his work on the Dell Peanuts title HERE.


It's tempting to imagine how Stanley might have handled the rich characters and relationships of the Schulz strip. Instead, this brief, inadvertent intersection is the closest these two talents came to meeting.

The comic book "Peanuts" was previewed in backup stories that appeared in Nancy and Sluggo and Tip-Top Comics, two other Dell titles based on United Features Syndicate-licensed characters. Reprints (and re-reprints) of early "Peanuts" strips already appeared in comic books published by United Features, and then St. John's.

United issued a one-shot Peanuts special in 1953. This all-reprint book is a holy grail of many Schulz collectors. None of these pre-Dell titles featured new material. Schulz took a brave step down from the exalted realm of newspaper syndication to the lower depths of comic books in 1958.

It's rumored that Schulz drew one of these pilot stories (see Hale interview for the details, which remain vexingly vague). Western Publications published its first one-shot Peanuts comic book in 1958, as part of their "Four Color" series. After three trials, a regular Peanuts title began, cover-dated February-April 1960. It was a smart move, although the quarterly comic book version apparently wasn't as popular as all parties concerned might have hoped.

As a stand-alone series, the book was available for subscription. It needed an unrelated secondary feature, to meet the demands of the U.S. Post Office. The trial issues offered solo stories featuring Snoopy, the iconic beagle. Apparently, that wasn't distanced enough for the Post Office. Four-page "Sluggo" stories, seemingly drawn from inventory, slotted into this filler area.

The first "Sluggo" story, drawn by Dan Gormley, is clearly not Stanley's work. The next two issues' "Sluggo" fillers are Stanley-written, and provide an extra taster of this troubled but fascinating segment of John Stanley's comics career.

I've written plenty on Stanley's Nancy comics, throughout this blog. If you're interested in more, just click on the "Nancy" label at the end of this post. 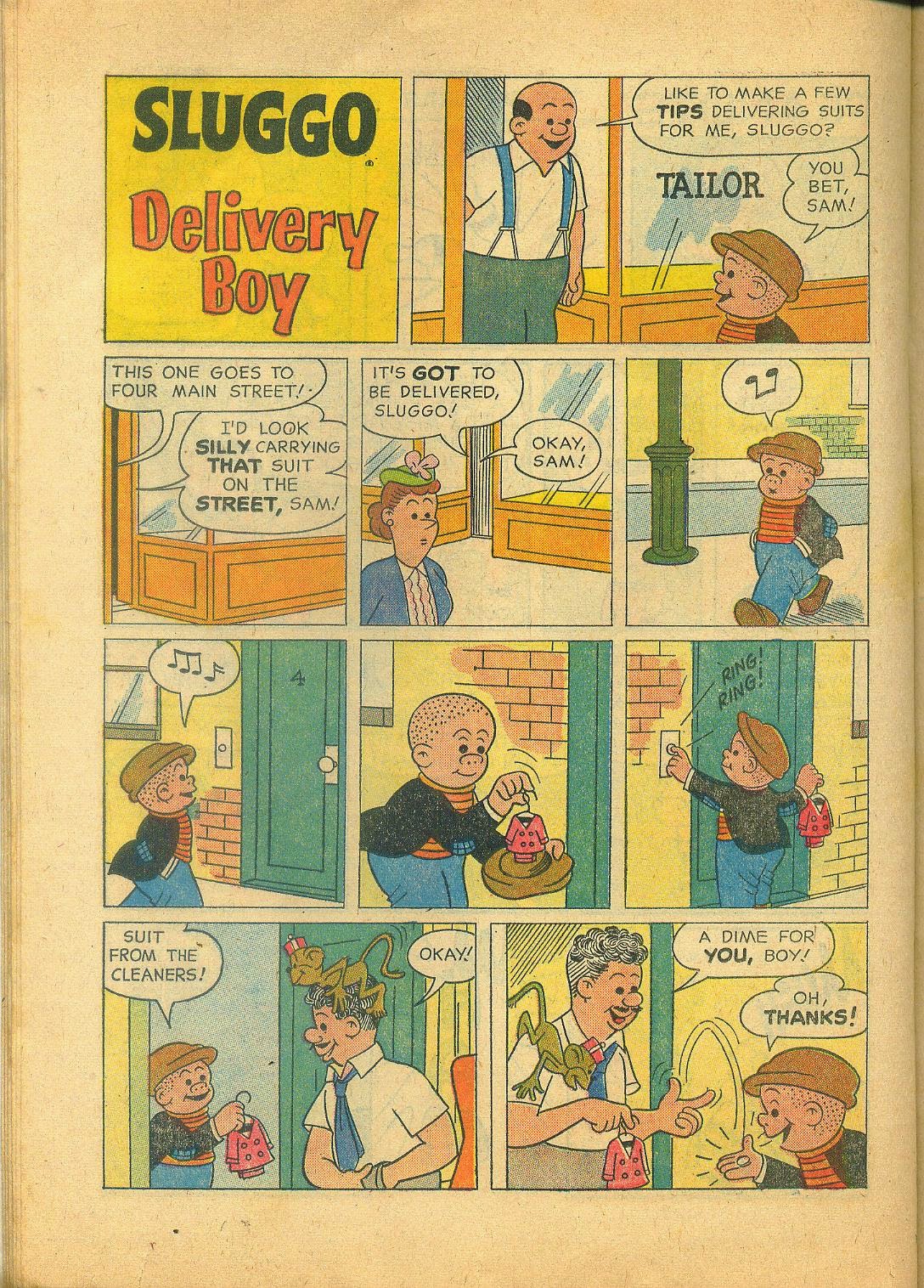 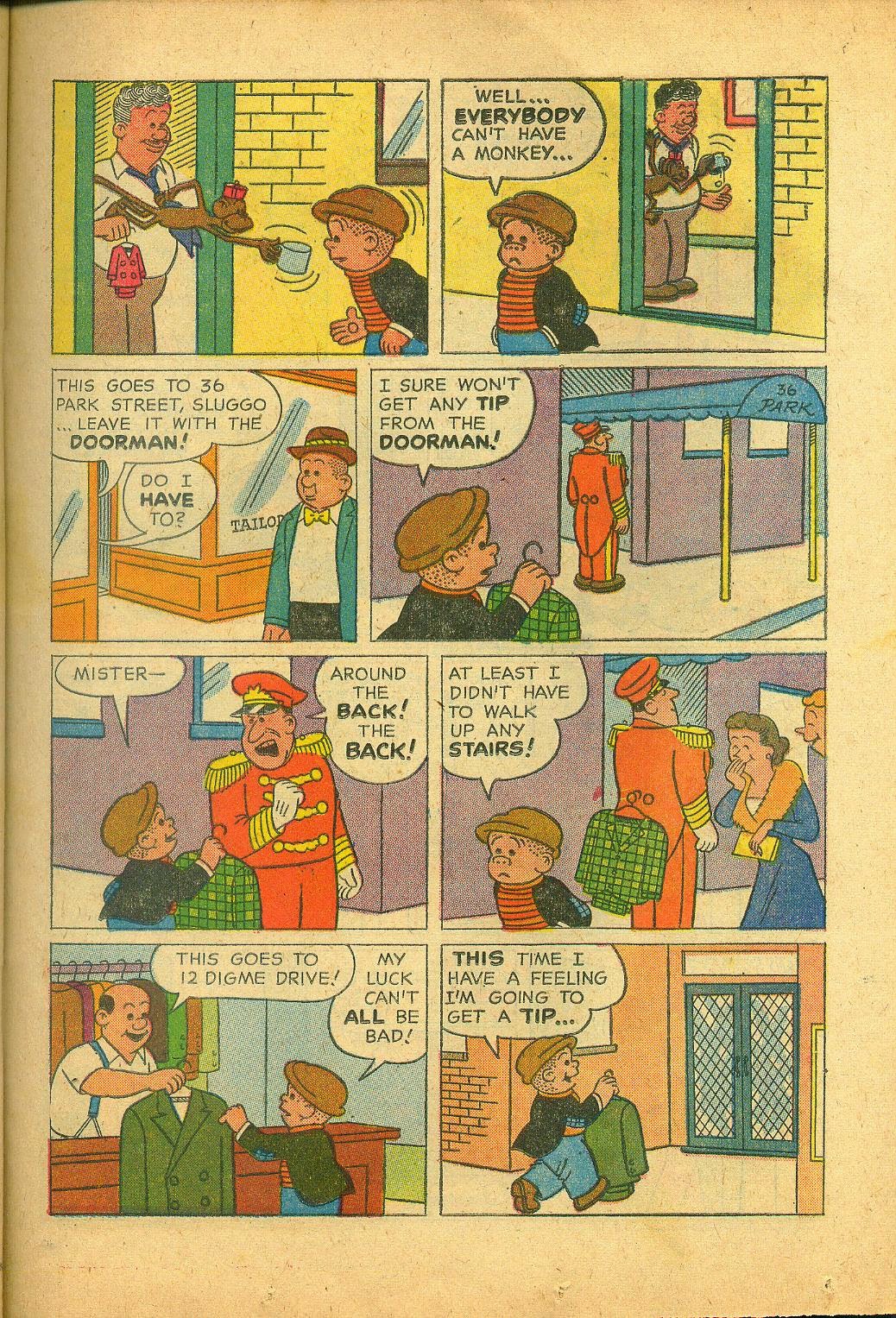 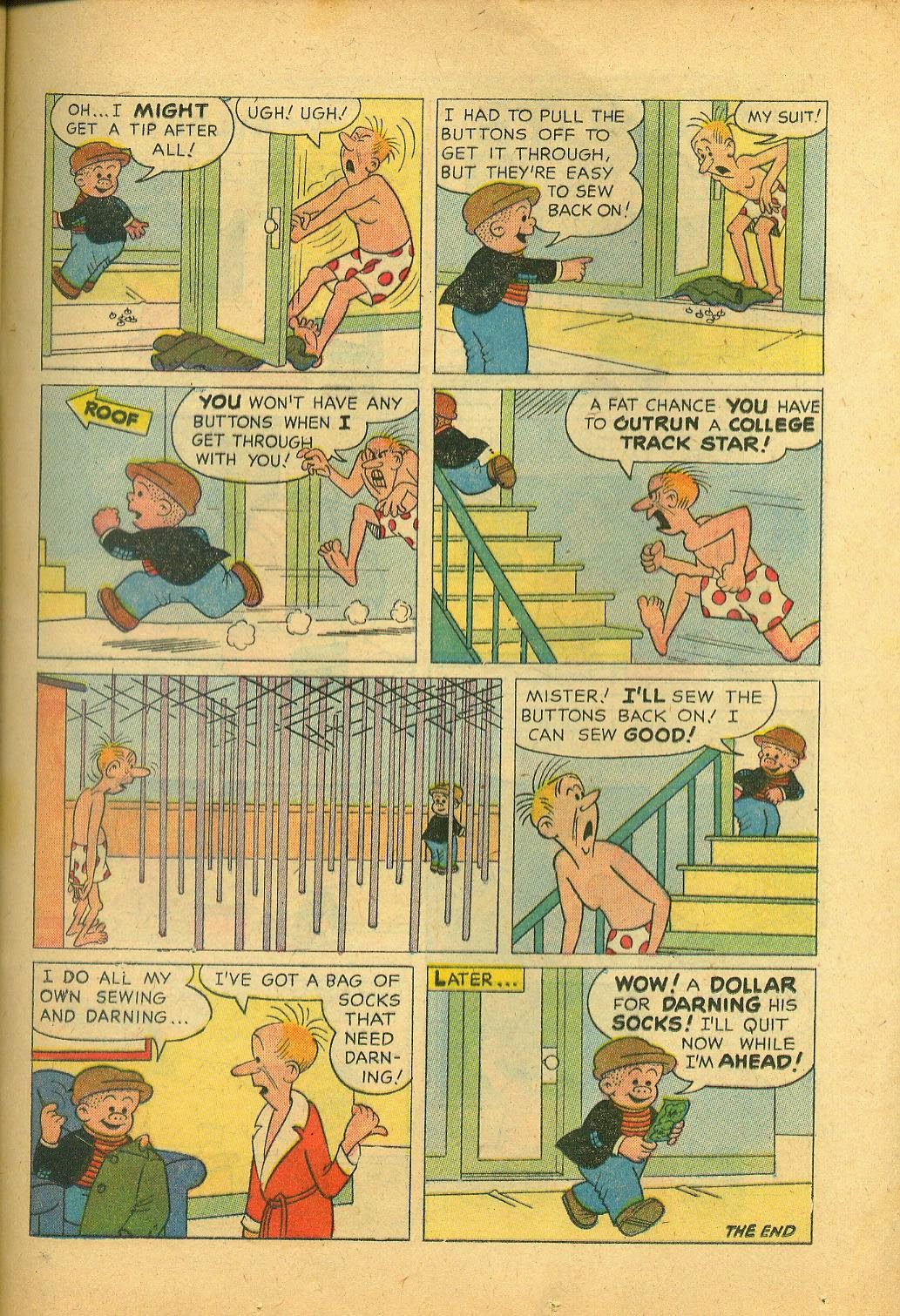 Stanley was inspired on the day he wrote "Delivery Boy." The sequence at the end of p. 1/start of p.2 is classic stuff, ending with Sluggo's existential sigh: "Well... EVERYBODY can't have a monkey..."

The next issue's "New Shoes" plays to Sluggo's outcast, disenfranchised side, with strong results: 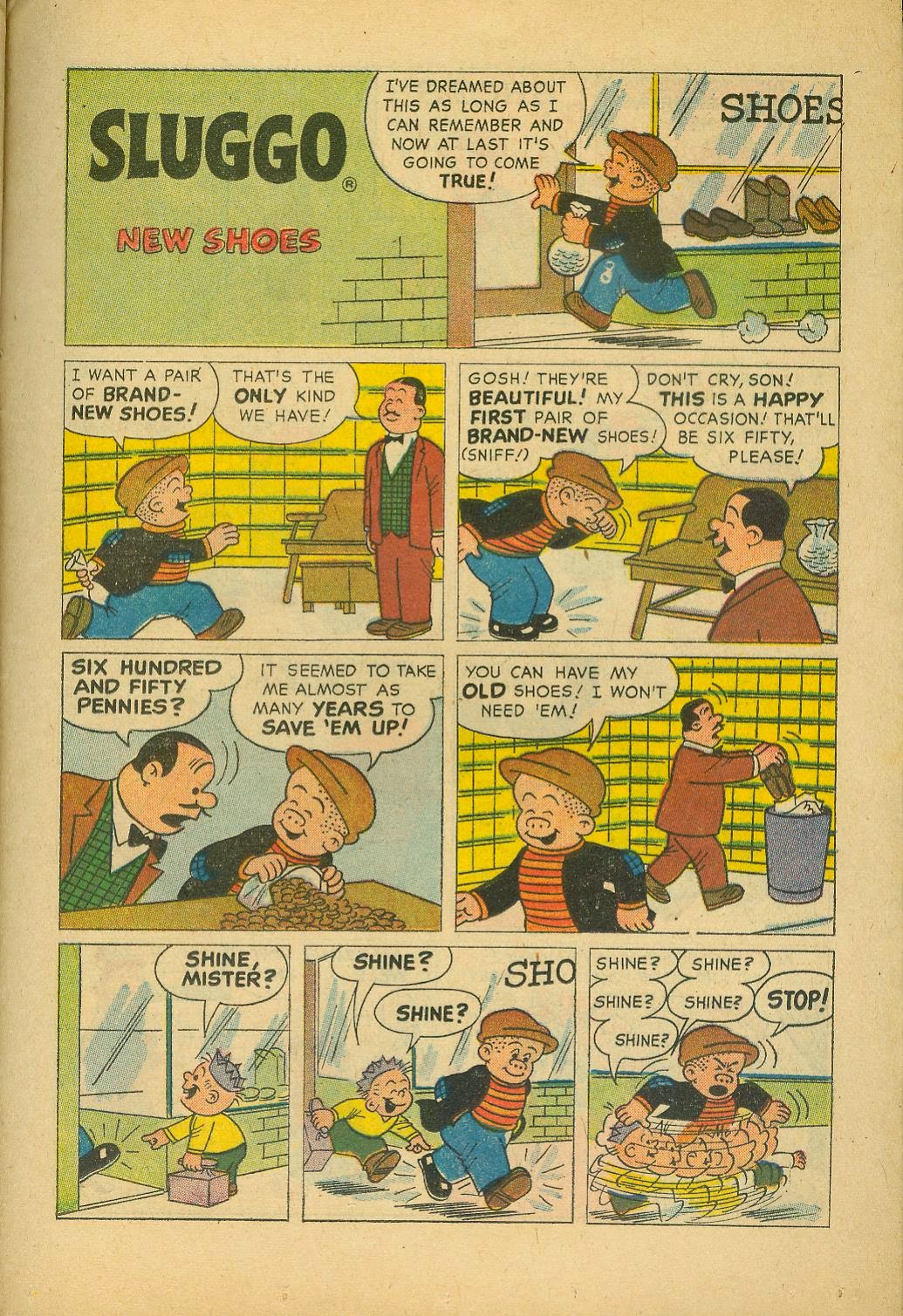 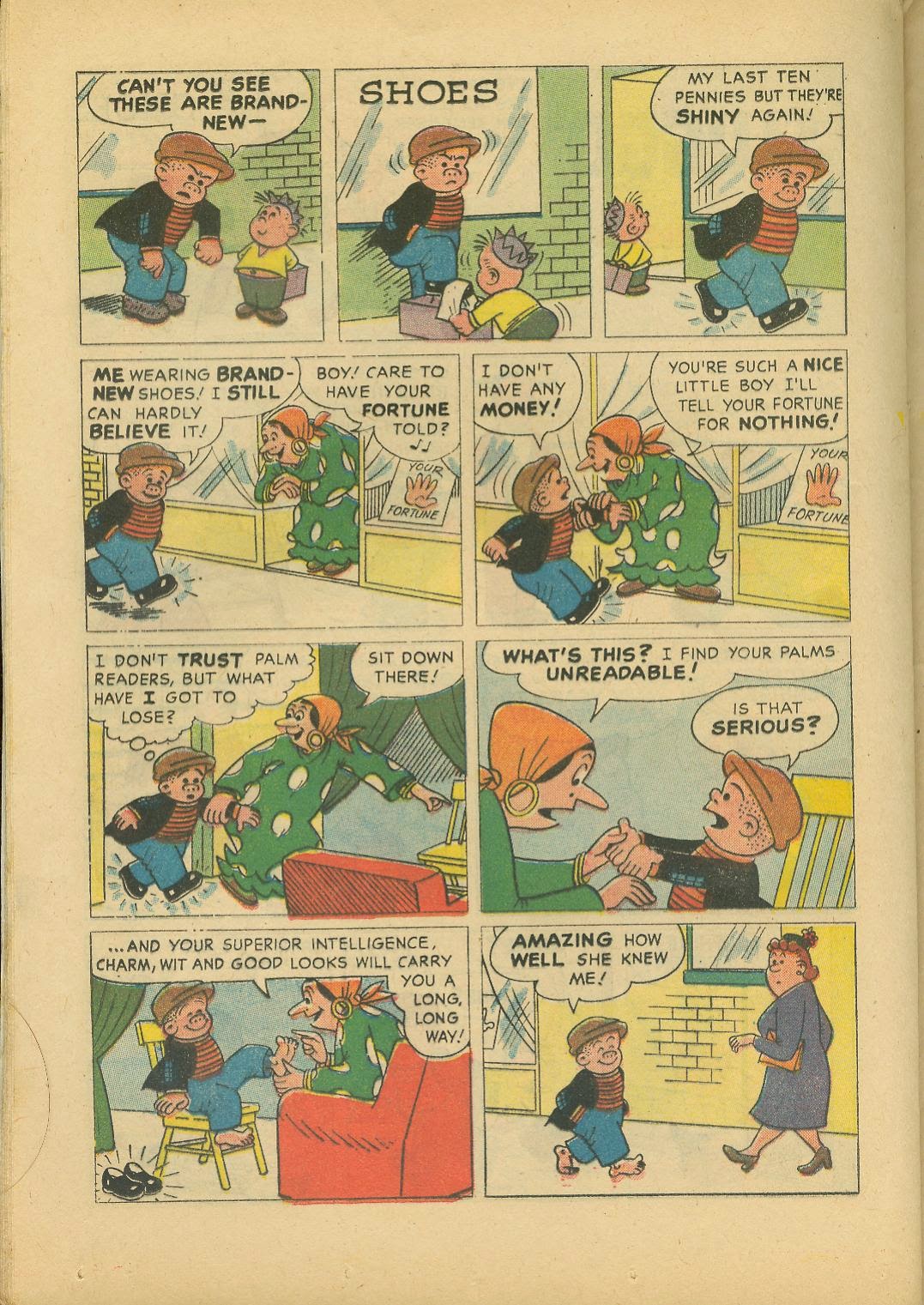 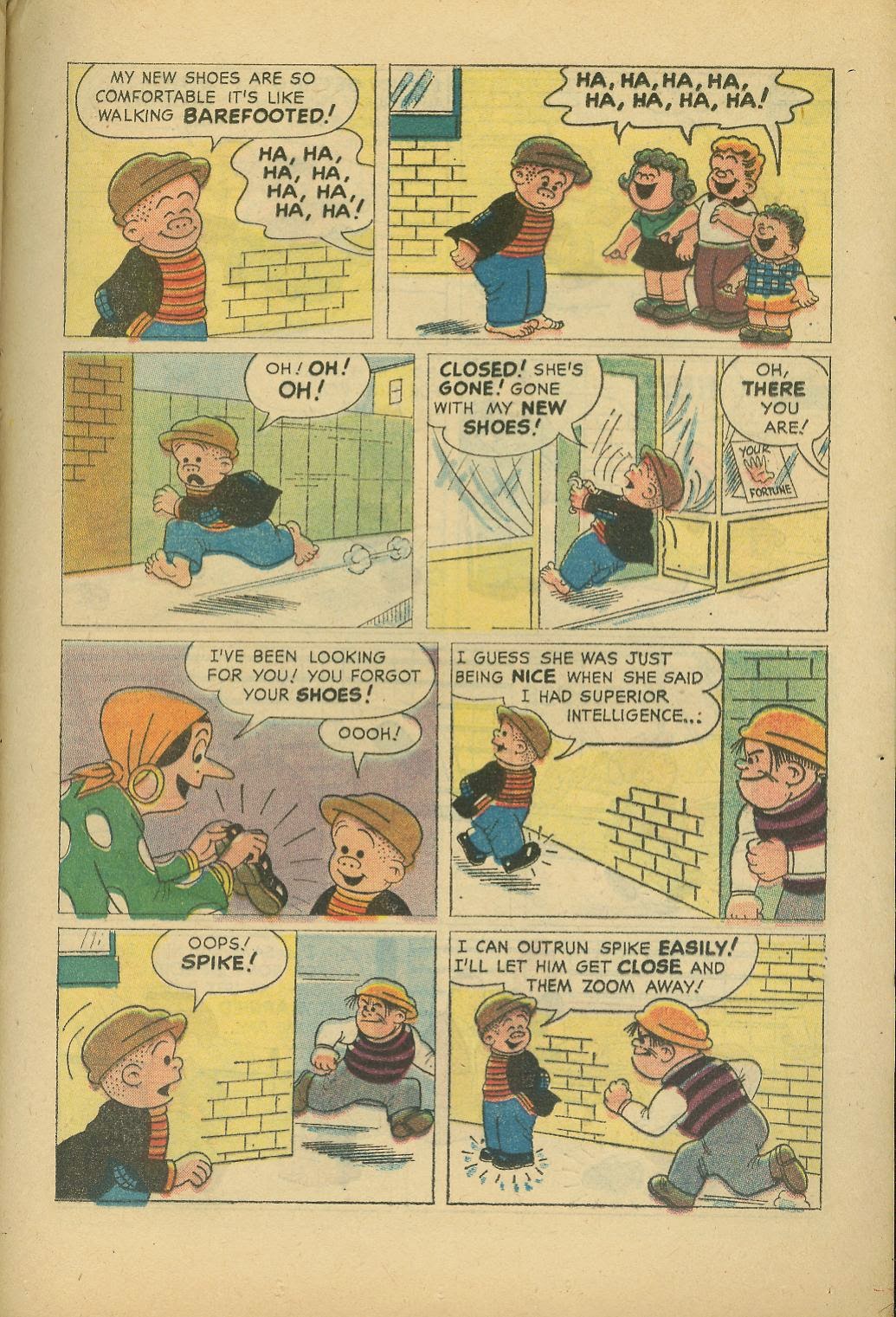 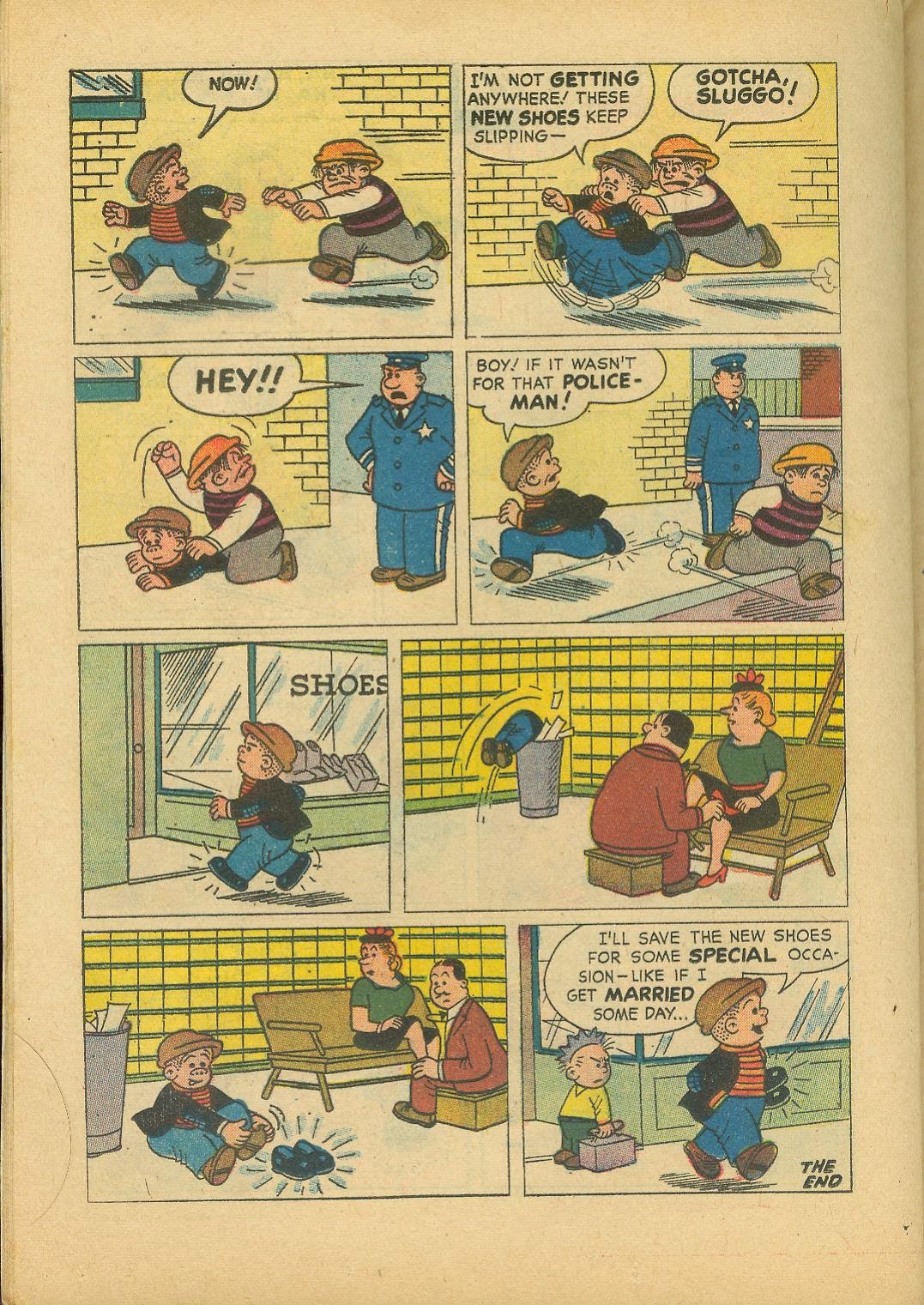 "New Shoes" says more about the Sluggo character, in four pages, than many of Stanley's stories in the regular Nancy title(s). He is the archetypal Stanley outsider: poor, out of sync with the world around him, and desirous to meet that world, despite his lack of connection or understanding.

In the end, Sluggo reverts to his old shoes, and his low status in the universe. Stanley's misfits strive to exist in the mainstream, but their heart is seldom in these attempts, and their known world suits them best.

On that note, Stanley's involvement in the Peanuts comic book series ended. Other, less apt hands continued the "Sluggo" fillers (and one "Nancy and Sluggo" episode) for the book's duration.

That was it for the comic book Peanuts until 2012, when Boom! Studios produced new material aimed at younger readers. They continue to do so, and the series appears to be successful.
Posted by Frank M. Young at 10:51 AM