Thad K. wrote and asked me if I had the second John Stanley-written "Andy Panda" story (see last post for the third installment).

I do, and I had to confront my collector side in presenting this rare early piece to you all. In order to scan this 8-page story, I degraded a VF+ copy of this 1943 funnybook, probably to VG+. So it goes. These eight pages are the only worthwhile content in the whole shebang, aside from reprints of Otto Messmer's Felix the Cat newspaper strips. And the story does no one any good languishing in a sealed plastic bag. I doubt these early stories will ever be reprinted. So screw condition... it's all about what's printed on the pages, not what some "authority" sez they're worth!

Thad pointed out something I'd overlooked... that Andy's domestic partner, Charlie Chicken, ages in the first three stories. In #79's piece, Charlie is a chick-like thing--the equivalent of a 7 year-old kid.

In this story, he's half-grown... perhaps a teenage chicken. In the following story (again, check out previous post), Charlie is the more-or-less adult-size squab he would remain ever after.

You don't often see radical changes in such characters. I suppose that, because Charlie wasn't really an official part of the Walter Lantz world, he could be quickly re-thought. (A Charlie-esque chicken--actually, a lot of them--appear in Shamus Culhane's 1943 Meatless Thursday, the first of the innovative director's Andy Panda cartoons. This may be what inspired the idea for Charlie.)

On the other side of the continent, Carl Barks also worked non-standard, recurring characters into the world of "Donald Duck." These outside-the-box figures, including Uncle Scrooge, the Beagle Boys and Gyro Gearloose, also changed dramatically in each of their early story appearances.

In all cases, a standard design was quickly settled upon, and never again changed.

In this story, we see one of Stanley's earliest YOWs, plus a whole lotta commotion, as bear and chicken destroy their domicile, in conflict with one grade-A smart-ass insect. Said insect indulges in some mind-fudgery with Andy and Charlie, and then requests another playdate.

Charlie turns white on one page of the story. Oops! 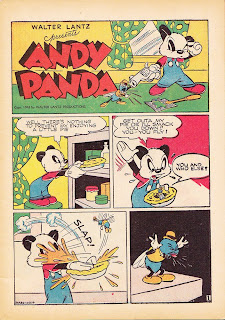 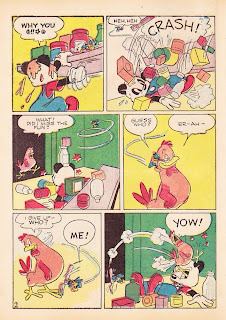 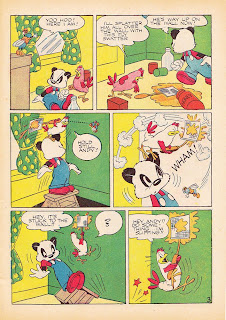 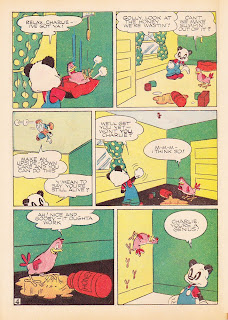 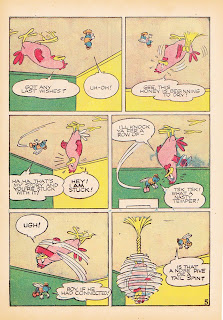 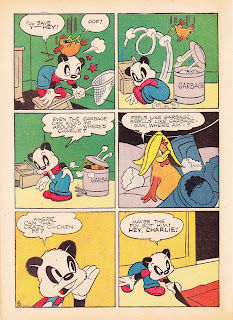 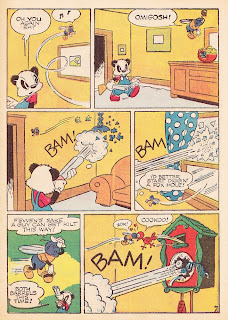 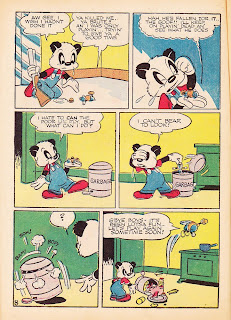 I'm surprised you of all people wouldn't have noticed the growth! Oh well, weirder things happen. There's a Charlie-esque rooster in ANDY PANDA'S VICTORY GARDEN by Alex Lovy which uses the same design in Culhane's cartoon. It's nowhere near as good of course.

Very funny story, I laughed out loud at the guess who bit.

Sorry that you had to degrade your comic like that just for me. It's happened with me more than a few times. But I agree, screw the market value prices. The junkier the better for me.

You're welcome--and no worries! When it comes down to it, I'm a historian, not a collector. It's better to get this material back into circulation than to hoard it.

I haven't seen those non-Woody, pre-Culhane Lantz cartoons since, gulp, before you were born! And, I don't think that Alex Lovy cartoon was part of the syndication package wherein I viewed the Lantz product, circa 1981/2. MEATLESS THURSDAY wasn't in the package--nor were most of the war-themed cartoons.

Somewhere back in the cobwebbed filing system of my brain is the image of that Alex Lovy-directed rooster.

Re Charlie's growth: it's the intermediary stage that I'd forgotten about. I used to have a crappy, crooked scan of the first Stanley AP story, but it bit the dust along with the no-good computer that died, some time back...

It seems more "normal" for a character to be an infant in appearance #1, and then full-grown in appearance #2. Having Charlie's growth take up three issues is a rather sophisticated touch.

You'll be pleased to know that upcoming posts will include material from NEW FUNNIES #82, 86 and 90. This will include Stanley's first proper Woody Woodpecker story, and a Li'l Eight Ball story featuring addled archaeologists (a Stanley favorite)!

Glad I could provide a laugh-out-loud moment for you!

I have NEW FUNNIES #79. Perhaps it was my crooked copy you found online when I ran a site devoted to old comic books featuring the Hollywood cartoon characters. I'll scan it when I'm home for the summer. Looking forward to more Lantz Stanley stuff. I wish they'd reprint it.