Thanks to Tom Devlin, the generous and extra-swell editor of Drawn + Quarterly's John Stanley Library, we are afforded a very welcome super-sized look at John Stanley's 3/15/1947 New Yorker cartoon.

The teensy, lo-rez version I recently ran is a sad joke--a travesty of Stanley's work. Here, we can savor Stanley's sophisticated pen-line and distinctive cartooning style at a generous, revealing king-size.

But first, the genuinely clever and well-designed cover of the 3/15/47 issue. It's not Stanley's work, but it might help you find the issue, should you ever come across a horde of vintage New Yorkers in a bookshop or antique mall: 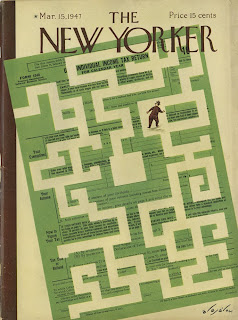 And now, the cartoon itself. In its original appearance, it was split into 2/3 and 1/3, and run on two pages. I've left the first page as is, but cropped out the article section that filled most of the second page. Have a look at this beautiful work... 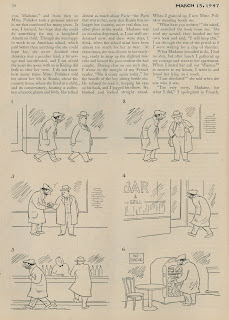 The grace of Stanley's handiwork is obscured in the Complete New Yorker Cartoons' pint-size reproduction. His confident contour pen lines fairly sing as they describe the volume and form of their figures and settings.

Those familiar with Stanley's cartooning for Little Lulu, New Funnies and Animal Comics will recognize his human characters. Stanley's comic book stories were drawn with a bolder, simpler line than he uses for this piece. (This may be caused by the cheap, high-speed funnybook printing process, which wasn't always hi-fi to the original artwork.)

I particularly like Stanley's decision to let pen lines invade boundaries of volume and form. The lines that run from the characters' pants legs into their overcoats is very much of its era, technique-wise. Contemporary cartoons by Vip, Hank Ketcham, Sam Cobean and other successful magazine artists also affected a deceptively loose pen line.

I've read that this developed from the cartoonists' submitted rough versions of their cartoon gags. Editors liked the freeness of their more relaxed preliminary drawings, and encouraged them to adapt this looseness to their finished art.

This style ran rampant in post-war commercial art, especially through the 1950s. A study of paperback book covers in the 1950s shows a trend that moves away from tight, photo-realist painting styles to sketchy, loose, freer styles of drawing and painting.

This off-the-cuff technique belies the masterful artistic skill that many post-war commercial artists possessed. It did bring a freshness to traditionally earth-bound, representative styles in print and advertising work. This style reached an unfortunate nadir in the 1960s and early '70s--as did many post-war stylistics that had been run into the ground via repetition and dilution.

Stanley's cartooning style owes a bit to James Thurber's. I don't know if Stanley considered Thurber a major influence, but his 1940s work is essentially a tighter, more solid variant on that unmistakable style.

I also see a bit of similarity to Charles Schulz's 1940s cartooning. The faces of the figures, and the pen line, are close to Schulz's way of rendering. Of course, there's no way Stanley could have seen Schulz's early work. It's more of a zeitgeist thing, as many post-war cartoonists sought to work in this visually pleasing manner.

Seeing this lone New Yorker cartoon in high-resolution and large size makes me mourn Stanley's lack of similar efforts. It was a gain for the comic book world, and to us, as readers and admirers of Stanley's storytelling brilliance.

To be honest, I'm glad that we have the hundreds of rich, detailed, satisfying comic book stories, rather than a similar lot of magazine gag cartoons. It would have, on one hand, been a waste of Stanley's great narrative and comedic gifts.

On the other, Stanley would have made more money as a New Yorker cartoonist and gag-writer. He would have been able to sign his name to his work, and receive public acclaim.

With the next post, I'm going to make a departure from the Stanley Stories formula. It may take some extra time, but I hope the end results will meet with your interest and approval. 'Til then, thanks for dropping by once again...
Posted by Frank M. Young at 7:51 PM

Labels: New Yorker, Stanley as cartoonist-writer, Stanley in the 1940s

Gosh, Frank, thanks so much for revisiting this cartoon, and to Tom Devlin for providing it. It's astounding how much is lost in the small/low-res version of this in the New Yorker Book/CD. Seeing it in all it's glory is a revelation.

Stanley's figure work on this cartoon is sublime. The slumped posture of the bum seems to suggest so much about the personality of that individual. The man on the street is drawn so perfectly, I can easily see what he's thinking, and interpret all his actions. Even the poses of the characters in the background, the bartender and man at the bar, are strong enough that I feel like I can almost hear their discussion.

And the backgrounds are perfect as well. That chair is just awesome.

I missed, or just skipped over all of this stuff when seeing it in it's tiny CD version in the New Yorker collection. Thanks for providing me another look.

Thanks to both Tom Devlin and to you, Frank Young, for this gem. I recently saw the "Complete" New Yorker Cartoons book and DVD-Rom in a book catalog selling for $14.98, and I would even pay that for the set because of the poor resolution. It's like looking at shadows instead of people. ANyway, so satisfying to finally see this cartoon in detail. It lives up to my expectations, which is kind of amazing. It's longer than the usual New Yorker cartoon, has great drawing, and a layered gag. It reminds me a little of the Blechman sequential gags in the recently HUMBUG. I see a little of Chon Day in the art, too, who I believ was a New Yorker cartoonist around the same time. Your comments are very perceptive, Frank.