Here is the "Woody Woodpecker" story that immediately followed the "Andy Panda" episode I ran the other day. While the "Andy" story is a textbook example of Stanley's character types, and of his early skills as a comix creator, this "Woody" story is a playful eccentricity.

Like Carl Barks' version of Donald Duck, John Stanley's Woody Woodpecker burns through many occupations--usually in utter failure. Stanley's Woody, being even more of a creature of impulse, often gets himself into terrible crises, or causes scenes of utter chaos, when he attempts to make his way in the world.

Here's a curious, charming story in which Woody excels at a niche job, has a good social relationship with others in his world, and shows utter mastery of his skillset.

Stanley seems to have enjoyed himself in writing this story. It's bright, playful, loopy and bedecked with various Stanleyisms--including one of his most blood-curdling YOWs.

Here is an example of the light side dominant in a Stanley story. Dark elements decorate the narrative, but they don't drive it. Yet it isn't cutesy or feeble. 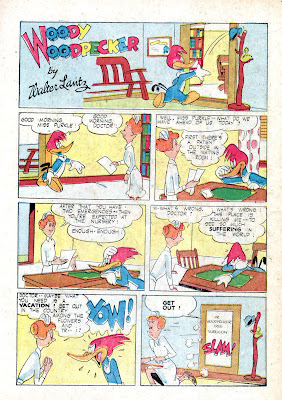 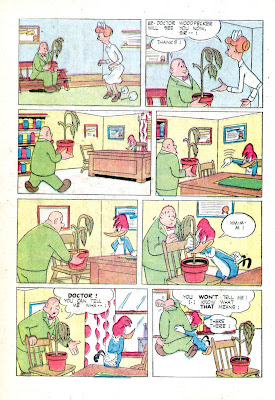 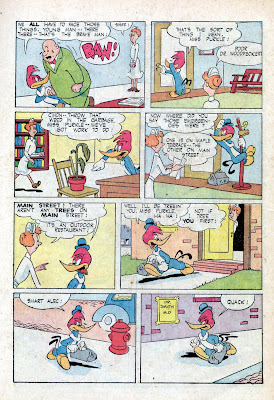 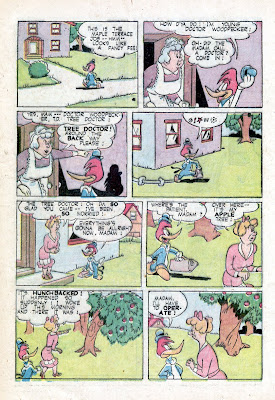 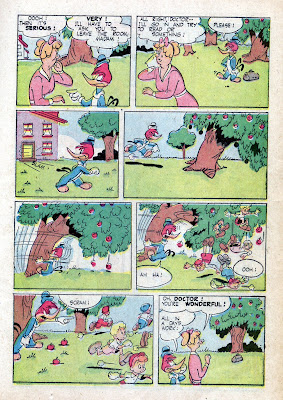 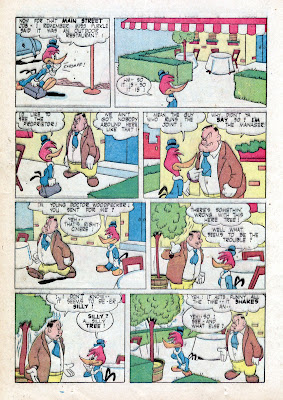 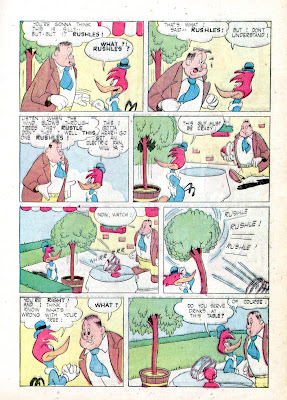 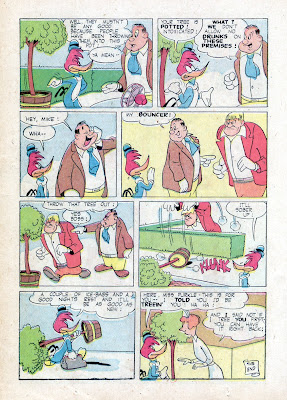 Doctors are generally on a par with antique dealers, art dealers, psychiatrists and the wealthy in John Stanley's world--fit only as subjects of lampoonery. Stanley plays this episodic, character-driven story as a light farce.

Satiric references to melodramatic radio serials and movies of the "Calling Dr. Kildare" persuasion fill this story. Certainly, the notion of unstable Woody being a successful practitioner is inherently funny.

Yet Woody is a success, throughout this story. He demonstrates a good plant-side manner, takes his work seriously, and adroitly solves others' arboreal troubles. He's even empathic enough to take the soused tree back to his office, fulfilling his punny promise to Miss Purkle, his smart-aleck nurse.

Some of Stanley's antipathy towards doctors comes through in the last panel of page three. His opinion of the medical trade improved during the 1950s. Doctors are depicted in Little Lulu as more high-status characters who do good for the world.

Stanley's comix stories are often surprisingly literate. While he seldom indulges in George Carlson or Dr. Seussian wordplay, he writes with a keen sense of the music of words. His dialogues never seem forced, and typically reinforce the world-views and manias of his characters.

He handles expository dialogue especially well--no mean feat in the often-telegraphed manner of 1940s and '50s comix writing. I appreciate his conscious efforts to keep his dialogue active and uncluttered.

I offer this story for its stark contrast to my prior post. It's as light as Tubby's "Hide 'n' Seek" is pitch-black.
Posted by Frank M. Young at 3:10 PM