One reason for the modern-day appeal of John Stanley's Little Lulu: it has almost no objectionable old-school biases. Aside from a few gentle ethnic stereotypes (Irish cops, Italian grocers, and perhaps an Asian or two), Lulu's world is largely free of America's pop-culture skeletons-in-closet.

It is, like The Andy Griffith Show's Mayberry, a kind of Anglo-Saxon fantasy world, in which non-Caucasians are hinted at, but usually relegated to the background. They're never depicted as subservient or demeaning characters; they just don't exist, for the most part.

Such carefully orchestrated universes were comfort-food entertainment for post-war America. They seem, to me, to be a last desperate grasp at the idylls and ideals of pre-WW I American life--the final, faint traces of which could be felt in the background of post-war USA, especially in more rural, isolated areas.

Lulu is deemed safe reading for 21st century kids. To judge by what I've seen, these kids eat Lulu up with a fork and spoon and want seconds and thirds.

There is one gray area in Stanley's post-war Utopia that hangs darkly over modern parents: the depictions of physical discipline towards child characters by adults. I've spoken with several parents who mention that they have issues with the episodes of spanking that were stock parental activity in 1940s and '50s domestic life. (Spankings continued to be in wide use through the early 1970s, and perhaps later.)

Violent physical discipline is now taboo, and considered "trailer trash" behavior. (For shocking modern-day public displays of child-whipping, steel yourself and enter any Wal-Mart for as long as you can stand being there. 30 seconds usually does it for me.)

This aspect of Stanley's work is in the Dark Side. It is usually dealt with between parent and child. The threat of physical punishment is a stakes-raiser in many a Lulu story.

By the standards of their era, these punishments were acceptable. Now that parenting is more a negotiational act than a physical one, scenes of spanking have to be explained when Lulu is read by hipper kids in more hep households.

I was spanked as a kid. It left emotional scars, and a general distrust of the unpredictable whims of adults. I am glad to see that the majority of parents absolutely refrain from physical punishments, and favor negotiation or the use of consequences (i.e., "Stop hitting the wall with the croquet mallet now, or no more "SpongeBob" for the next week!").

Another physical threat exists for children in John Stanley's world: the alienated, sociopathic loner. This character is, sometimes, married (e.g., McOnion in Nancy and Sluggo), but typically lives alone, in a poorly-kept house, and has a name like "McGripe," "Krank" or "Grouch."

This presence is a fixture in post-war American pop culture. Perhaps the Kranks and McGripes were always there; maybe they were shell-shocked victims of wartime violence. Whatever the case, these off-kilter individuals usually lurk in the backgrounds of all sitcoms, domestic-themed comix, popular fiction and movies, well into the 1970s.

They are usually depicted as buffoons--barely tolerated misfits on the margins of "normal" society. They are talked about, subjects of gossip and speculation, but they are allowed to live on the edges of the suburban world.

Here is a particularly creepy manifestation of this alienated loner-type--an ultimate TTO figure in the John Stanley universe. In this "Tubby" episode, the chips are stacked high against our anti-hero. The co-dependent TTO team of Wilbur and Gloria goad Tubby into an intense, dark encounter with "Ol' Mister Grump" in the story "Hide 'n' Seek." 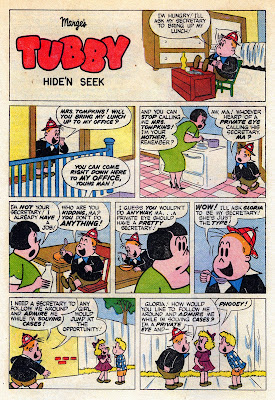 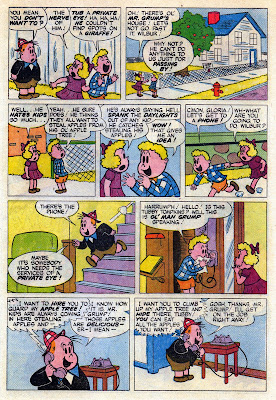 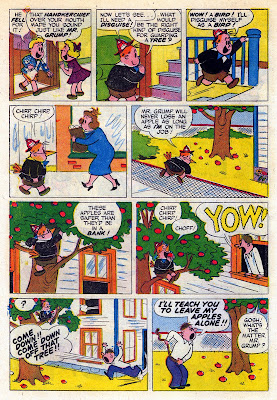 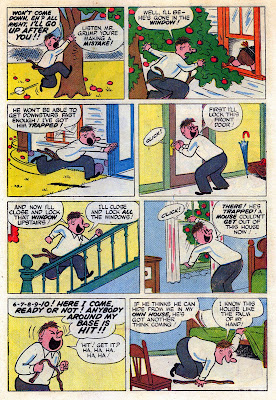 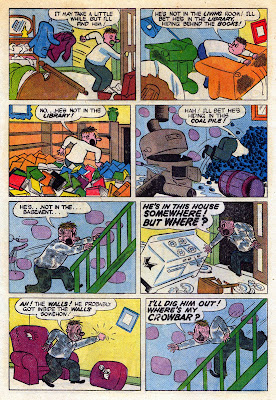 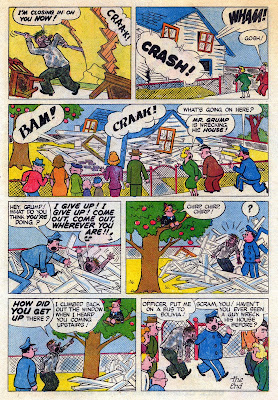 The core of this story's dark comedy is Mr. Grump's single-minded destruction of his home. This startling feat is watched with great amusement by his "normal" neighbors, who continue to gawk as Grump is led away by The Authorities. (His non-sequitur exit line is, indeed, a comic gem.)

Stanley lulls us with a deceptive beginning. Tubby, deep in the self-role of TV-show private eye, entertains us as he calls for his lunch to be brought up to his room, and as he insults his mother about her physical looks. This is Tub in his prime--led by the nose by a fantasy that real life cannot, and will not, validate.

Tubby is dared to encounter Mr. Grump, whom Gloria fears so much she avoids walking by his home. Wilbur asks her why she's afraid of this "harmless" loner: 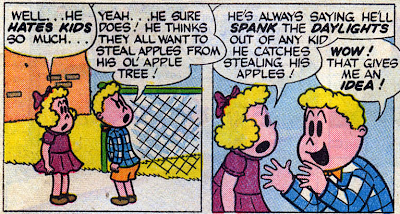 And, being the right bastard he is, Wilbur lays a quite dangerous trap for Tubby--one guaranteed to puncture his PI fantasy and place him in a high-stakes situation, where real physical harm could affect him.

Grump is more of a physical threat than McOnion. He wields a leather belt--that icon of mid-century childhood fear--and seems determined to thrash the daylights out of Tub.

He confronts and pursues Tubby through the warrens of his home, as his unreasonable rage builds to a dark crescendo. Frustrated, Grump finds release via the destruction of his home.

Something is Wrong-with-a-capital-W with Grump. The same applies to Sluggo's neighor-nemesis, McOnion. McO is all talk (and walk)--he verbally threatens a doom that never materializes.

Grump wants to cause malice. In this story, buried in an ordinary issue of Little Lulu, Stanley lets loose some of the darkest writing and characterization of his career.

Stanley was usually more cautious---and controlled-- in his authorship of Lulu. Perhaps he understood that this was a high-stakes venture: it was based on a popular, iconic cartoon character, done under the loose supervision of its less-talented creator, Marge Buell, and one of Dell Comics' big monthly sellers.

Thus, Stanley was less likely to take risks with this title. "Hide 'n' Seek" is a rare moment when his self-editor slips, and a startling amount of dark bubbles up to the sunny surfaces of Lulu-land.

The story's final frame, aside from the colorful babble of Grump, contains an adult authority figure who chastises the onlookers for their rubbernecking: 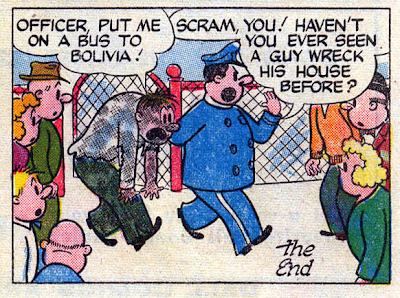 This seems to validate Grump's rage-fueled spree. Of course a guy might do this, when these damned nosey kids are around!

Among the fascinations of John Stanley's work, for me, is the regulation of dark and light. There is often great tension in his work around this black-and-white disparity. "Hide 'n' Seek" represents a sort of comix exorcism--and one that got past the editors and out, in its undiluted form, to the Great American Readin' Public.

Stanley's 1960s works -- Melvin Monster, 13 Going On 18 -- are celebrated for their unremitting darkness. Quite honestly, nothing in either of those titles comes close to the pitch-blackness of "Hide 'n' Seek."
Posted by Frank M. Young at 11:20 AM

That was an amazing start to my week!
You pick the most awesome stanley set pieces and your erudite commentary adds value as well :) Keep them coming!