There ya go. That's about as holiday-minded as I can be this year. But I still have a present for you: three (actually) four Stanley Stories from the pages of Our Gang Comics.

These stories, from 1944, show Stanley getting into top gear as a comix writer. He's not yet at the sublime heights of his best Little Lulu work, but he's fearless, playful and, when so motivated, able to bring impressive life and elan to characters and situations that are inherently weak.

Our Gang Comics, circa 1944, was an anthology of Western's three major talents. Walt Kelly provided the book's lovely covers and its titular lead story, filled with the artist's warm, intuitive renderings of the human form, in a civil communion of bigfoot cartoon and quiet semi-realism.

Carl Barks drew the "Barney Bear" series, which, he later claimed, he only did for the money. That may be so, but this early in the run, his stories had a genuine charm. Barks worked out some of the ideas he would present, in far better form, in his flawless late 1940s "Donald Duck" short stories.

Add to that John Stanley, who improved with each story he wrote, and the historical and artistic importance of this title becomes enormous.

If it had been known, before 2008, that Stanley wrote many of these "Tom and Jerry" stories (a discovery to which I can stake my claim, to the best of my knowledge), I think this title would be more closely studied by comix scholars. (Well, I'm giving Stanley's work in the book close scrutiny here, so I suppose that counts.)

My sincere thanks to the kind folks who scanned these rare issues and made them available for those of us who wish to read their contents, and not hold them as fetish-objects.

First up: Our Gang #13. We start a one-page gag rife with Stanleyisms: 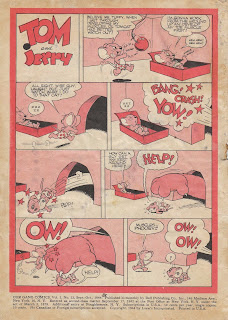 The main story is an early instance of a character's intense dream blurring the lines between the conscious and sub-conscious worlds. Stanley's masterpiece in this vein is "The Guest In The Ghost Hotel," which he also illustrated. (This was the first story posted on Stanley Stories, incaseyadidn'tknow.)

In 1944, such a concept was just a plaything to John Stanley. The depths of what he could do with such a rich, complex idea wouldn't dawn on him for at least a few more years. 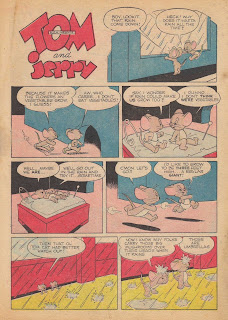 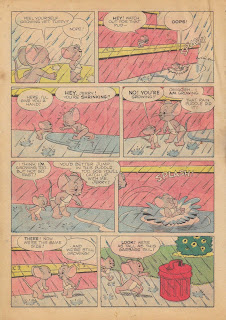 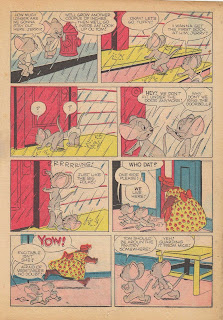 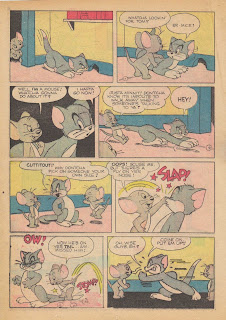 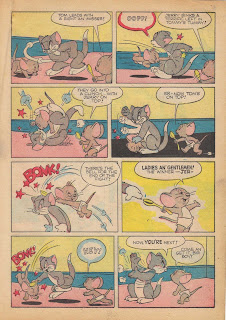 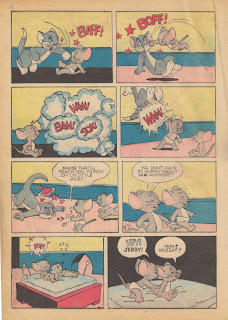 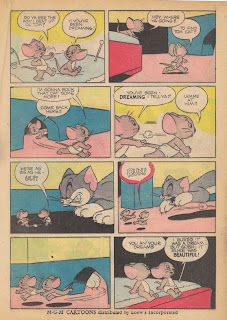 The presence of rain in a Stanley story is often a transformational device. Here, it becomes a manifestation of what the two mice understand about the world around them.

Given what little he understands, Tuffy's dream is perfectly logical. The rainfall enables the two powerless mice to assume a position of higher status in their limited world.

Most writers would end the story at the moment the dreamer awakes. Stanley chooses to let the narrative roll on for another page. Tuffy is given a jarring assurance that it was, indeed, a dream, and that his and Jerry's status is still just as sketchy as ever.

Worms are a prevalent theme in Stanley's stories for Our Gang #14. First up, here's an unusually brief "Tom and Jerry." 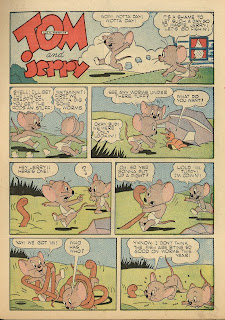 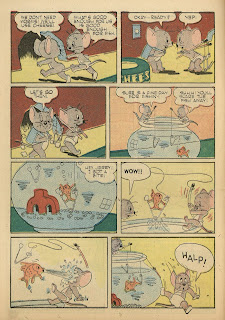 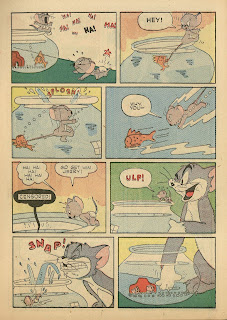 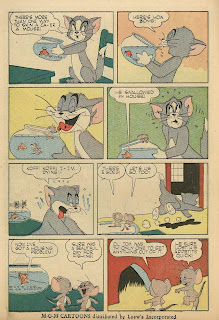 This too-short story shows the two mice engaging with other small creatures--all as sassy and impertinent as themselves. It's too abbreviated to do very much with this compelling theme, but it packs a great deal of brassy comedy into four pages--plus a subdued wartime reference to the housing shortage.

Stanley seldom put topical gags into his stories. While Barks, Kelly and other "kiddie" comix creators loaded their wartime stories with references to gas rationing, civil defense, scrap drives and such, Stanley generally kept the real world at a safe distance. It would only compete with the life-or-death scenarios of "Tom and Jerry."

Bonus feature: Since the TJ story for OG 14 is a mere four pages, Stanley was given the generally lackluster "Johnny Mole" feature to write. He wrote at least one other episode of this series, which was based on a one-shot MGM cartoon created by the Hugh Harman animation unit, towards the end of their stay at the studio.

The cartoon is typical of their output: smothering sentiment dashed with humor, with a traumatic climax that reinforces the none-too-subtle moral of the thing: stick close to home. Johnny Mole is a simpering little dweeb in the cartoon. He didn't offer much to work with, but Stanley tried... 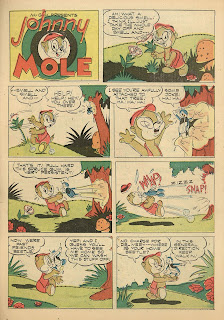 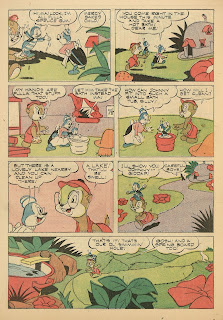 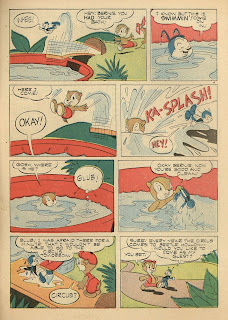 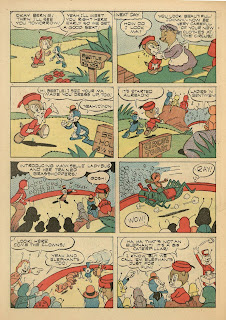 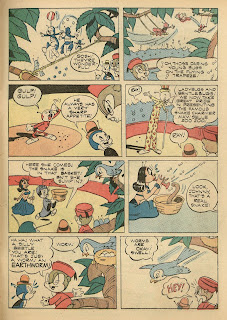 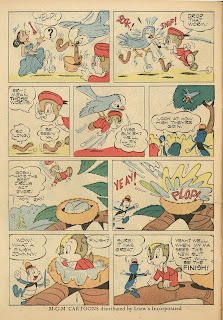 This is a minor effort--one that smacks of, "oh, crap, we got a six-page hole in this issue!" But it's certainly Stanley's work. The kid-talk throughout strongly anticipates the patter of Little Lulu, and the wild physical action is typical of his early work.

Here's the best of all, from Our Gang #15. Stanley's "tics" and more adult themes begin to dominate the series.
Tom is vestigal here--the focus is entirely on the mice, and, in this story's case, a rather jaundiced take on courtship and romance.
This may be the first Stanley story to focus on a romantic rivalry. It sets the tone for countless "Little Lulu" and "Tubby" stories of the 1940s and '50s. 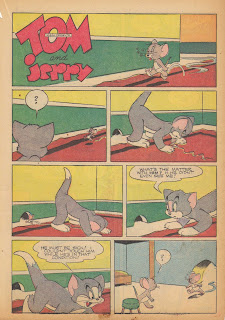 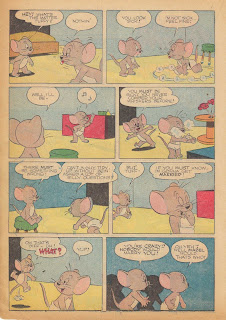 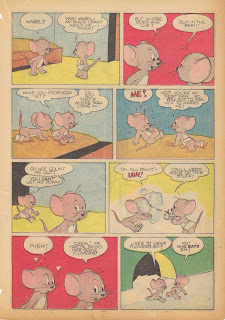 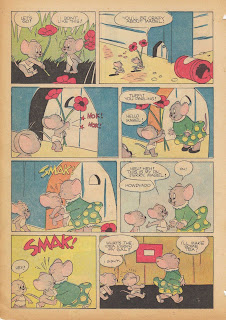 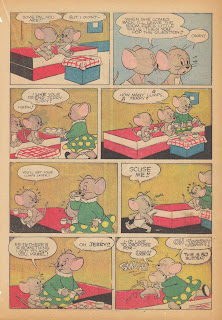 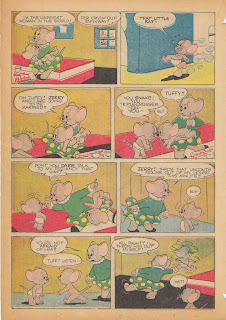 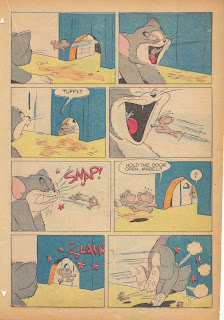 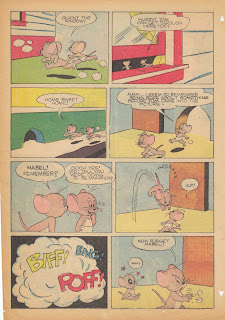 Mabel is a hilariously fickle, self-indulgent character--a gender-reversed proto-Tubby. (She is, tellingly, overweight.)
Mabel's aggressive need for rodent companionship, with any warm body a good candidate, makes a mangled farce of the courtship ritual.
The tea-party sequence of pp. 4-6 is a beautiful comedic mirror of adult interactions, as imitated by children, who see and hear everything adults do, and absorb it without understanding it. (Anyone who's ever heard a three-year old say "sh*t," to a suddenly shocked group of adults, knows what I mean.)
The adult themes and hard-edged, richly detailed humor of this story are pitched way above the heads of the Our Gang Comics demographic. By this time, Stanley already sought to heighten the reading experience of these licensed stories.
This may be my last posting for 2009. If so, I'll see you in the New Year! Take care and keep warm (unless you're in Miami or Las Vegas. In this case, seek air conditioning)!
Posted by Frank M. Young at 10:00 AM

Labels: Johnny Mole, Our Gang Comics, Stanley in the 1940s, Tom And Jerry

Our gang #13, 15!
As far as I can see your readers look after you, Frank!
This is not a post, it's rather a present. Thanks a bunch!
And happy whatever, mista.

What's your favorite New Funnies issue / Story. If you HAD to pick?

To answer Mike Matei's question: hmm! Stanley had some good runs on NEW FUNNIES... but it's hard to pick just one issue.

In general, issues 121-127 are all of very high quality. As well, those offer the highest quantity of Stanley scripting per issue.

I also really like the run of 1945/6 issues with Stanley-drawn "Woody Woodpecker" stories.

Since the non-Stanley stuff is pretty dire, and since some issues have very little Stanley content, NEW FUNNIES is a mixed bag.

Those 120-something issues are all pretty great, for Woody, Andy Panda and Oswald (and, sometimes, Li'l Eight-Ball). Check out the Stanley-drawn Woody one-pagers on the inside covers--beautiful examples of his 1940s cartooning!

"Carl Barks drew the 'Barney Bear' series, which, he claimed, was always from someone else's scripts..."

Sorry to kvetch, but where do you get this? AFAIK, it's been pretty well established that Barks wrote the lion's share of them, with only a couple of the first and last being written by others.
Otherwise keep up the magnificent work and research... great stuff! Pity I don't have the GANG issues you're missing.

Thanks for this correction. I was of the understanding that Barks seldom wrote "Barney Bear."

His heart was clearly not in these stories, with a few notable exceptions. I felt that he took what was given to him and improved upon it.

Is it known which stories Barks wrote?