Here is what I believe to be Stanley's first "Tom and Jerry" story, from Our Gang Comics #3, cover-dated January-February 1943.

The first Stanley-written "Andy Panda" story appeared in New Funnies #79, cover-dated September 1943. The "Bugs Bunny" Four-Color one-shot Stanley claims to have written (issue #33), was published in the fall of '43. Thus, this appears to be THE first Stanley story.

Like the earliest stories of Carl Barks, Stanley's maiden efforts, while tentative, have a certain freshness, and vaguely hint at the themes and comedic devices their author would hone to sublimity within a few years' worth of constant writing and publication.

WARNING: Stereotyped Afro-American maid character! I find it odd that the comic book version of "Tom and Jerry" elected to show "Mammy Two Shoes"' face front and center. The MGM cartoons, though often cretinous swill, opted to tastefully (?) show "Mammy" from the calves down. The actress Lillian Randolph, who appeared in It's A Wonderful Life, Roots and The Onion Field, did Mammy's voice in full-bodied "honey chile" style.

Several of the cartoons were censored for TV. In some cases, the scenes with Mammy were re-animated to have a white bobby-soxer incongruously spouting Randolph's down-home patois. In others, June Foray did an equally offensive Irish washerwoman voice that was subbed for Randolph's.

If the cartoons had shown Mammy as these early T&J comic book stories depict her, chances are they'd be buried deep in Ted Turner's vaults.

Chances are these early stories will never see an official reprinting, so read 'em here with the always-helpful American Irony Radar unit tuned in on the "Sins of our Fathers" wavelength... 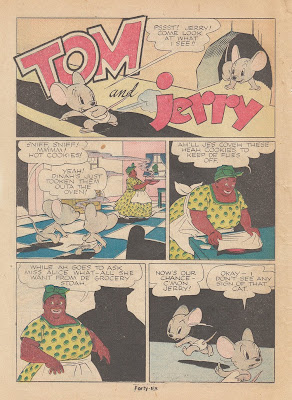 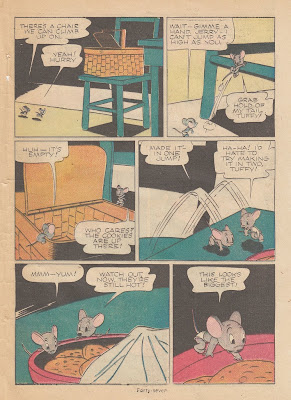 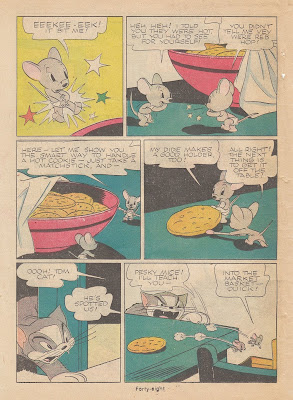 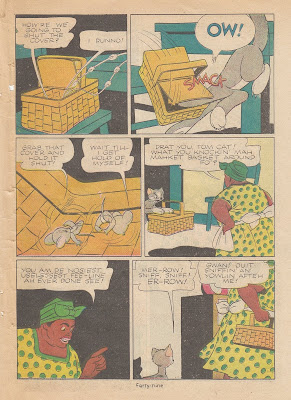 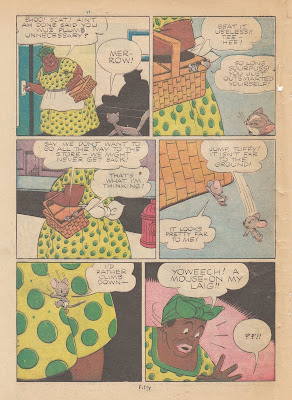 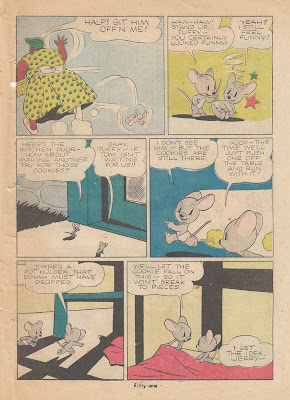 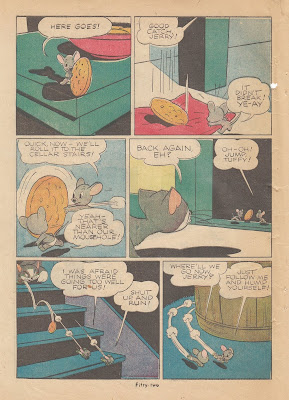 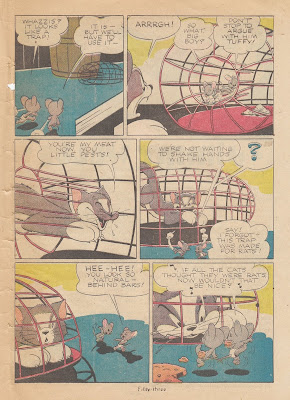 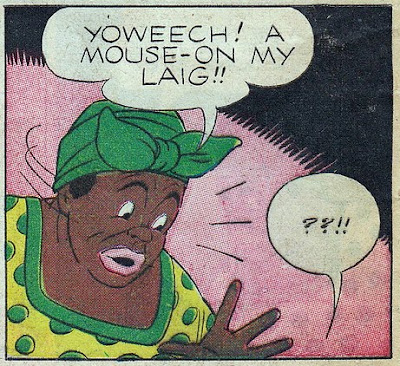 Tain't much to this first story (just as Barks' first "Donald Duck" 10-pager is no great shakes). The crispness of its telling, and the reliance on dialect--mushmouth for Mammy, kid-talk for the mice--plus a few un-punctuated statements in speech balloons, are the strongest Stanley tells.

Other tells: the use of the word "didie;" Tuffy's distorted hand-in-mouth dialogue on p.3, panel 2.

As well, the streamlined depiction of the two mice, and their outsider status in a dangerous, uncertain universe, bring a faint hue of despair to the otherwise-sunshiny pages of this innocent Dell kiddie komik.

I read the "Tom and Jerry" story in issue #2 of Our Gang, in preparation for this post. It does not feel like John Stanley's work. Thus, I believe this to be where it all began, John Stanley-wise.


One year later, John Stanley has begun to find his voice as a writer. The tiptoed steps of the first story become bolder strides.

This T/J story is impressively better than the one you just read. It's faster-paced, funnier, and has stronger, more well-defined stakes. Well, read it and see for yourself... 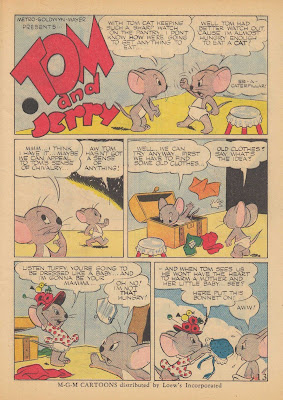 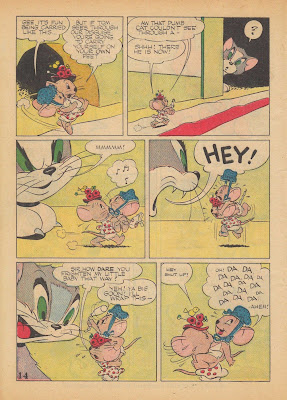 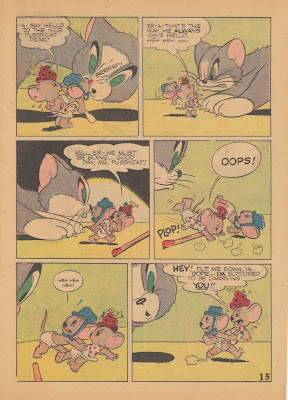 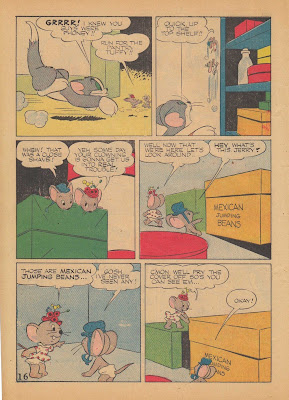 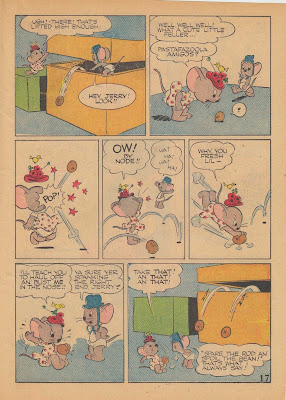 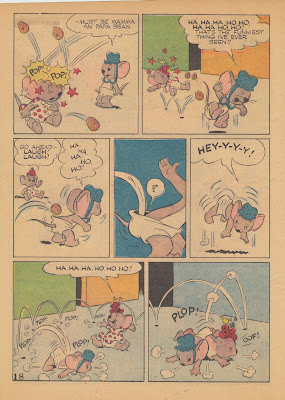 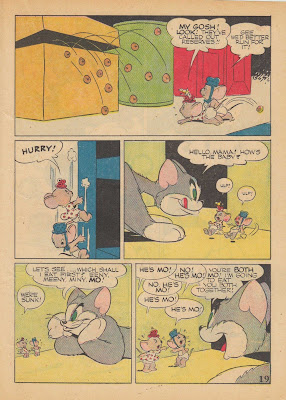 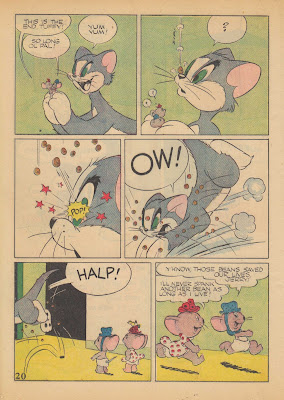 Like night and day, these two stories... in just one year of comix, Stanley had incorporated most of his major themes. There is a "Tubby Type" (Tuffy, the diapered mouse), percussive dialogue and sound effects, that familiar sense of despair gnawing at the edges of each panel, colorful, playful language with vivid colloquialisms and much stronger staging.

I quite like the background-free passages on pages 5 and 6 of this story. This staging choice really makes the story all about the characters. In such a small fictive world, this is important.

There is only so much a writer--even a good one--can do with the old cat and mouse routine. Stanley compensates by enriching these simple narratives with a heapin' helpin' of wry dialogue.

Nearly every line out of the three characters' mouths tells us something about their inner world. My personal favorite is Tuffy's utterance on the second page: "Gee, it's fun, being carried like this..."

Most tellingly, "Mammy" is nowhere in sight. The story is just about the survival game, and how the two mice endure it with a sense of humor and plenty o' attitude.

I hope this yuletide-free edition of "Stanley Stories" has proven a refreshing escape from all the holiday hoo-hah.

By the way, my fellow comix fiends, if anyone has issues 13, 15 and 18 of Our Gang, and would be willing to scan their contents for purposes of comix research, please contact me.
Posted by Frank M. Young at 10:01 AM

Labels: mice in drag, Our Gang Comics, racial stereotypes, smart-ass mice [with diapers], Stanley in the 1940s, Tom And Jerry

Excellent posting! Great to read Stanley's first story. Even though I am a big fan, I had no clue of what his story was, so this is a revelation for yours truly. Besides, it's always fun to read stories with diaper-wearing mice in them!

Hey, I like the new masthead for your blog.

Hey, thanks! I had a new logo on my to-do list for weeks. Finally got the chance to put it together last night.
That's John Stanley's signature, from his NEW YORKER cartoon, incorporated into the logo.
The previous logo-thingie was interesting, but it didn't reflect what this site is about.
Now I feel like I have the right header!
Akways a pleasure to hear from you!