I just learned that the artist of this, and many other stories posted on this blog, Irving Tripp, passed away on November 27, 2009.

Tripp was the most common collaborator of John Stanley. He drew most of the Little Lulu comic books from 1949 on, well past Stanley's tenure on the series.

Christmas was one of many seasonal themes that informed John Stanley's work. Little Lulu has its fair share of yuletide-themed stories. Many of those are archly funny displays of kiddie toy lust and suburban one-upmanship.

Stanley rarely created a Christmas-for-Christmas'-sake story. This is one of his very few efforts in this vein. Irving Tripp came along, to render this curious, decidedly minor effort in a quasi-Marge Buell style. 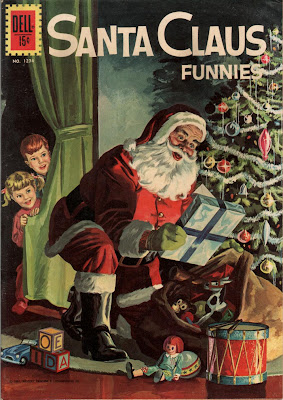 Santa Claus Funnies, like DC Comics' Rudolph the Red-Nosed Reindeer, was a seasonal series that enjoyed a long run.

Dell's book was a mash-up of various Western staff artists, and stuck to disconnected short stories, all involving the makers and deliverers of gifts (Santa, reindeer, elves) and those waiting at the receiving end (kids, parents).

It was the closest Dell got to publishing religious comix. Santa is a kind of religion. It involves belief in a figure who may or may not exist, and who is a symbol. I'm sure I'm about the millionth person to make this point.

I haven't explored earlier issues for possible Stanley content. This story, "Santa's Return Trip," is clearly John Stanley's work. It will probably go over like gang-busters with your children. This one's for them! 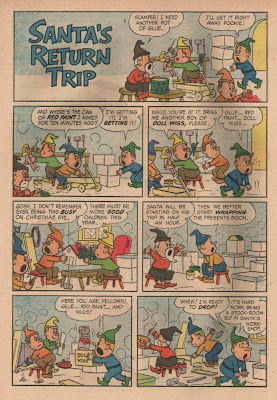 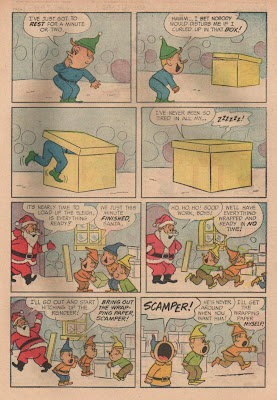 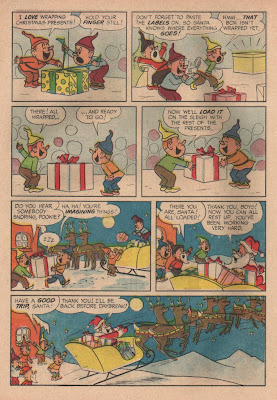 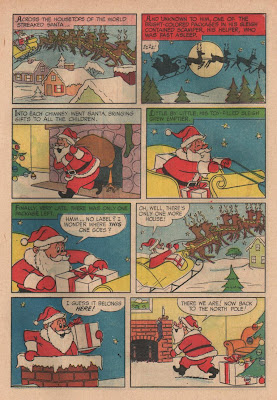 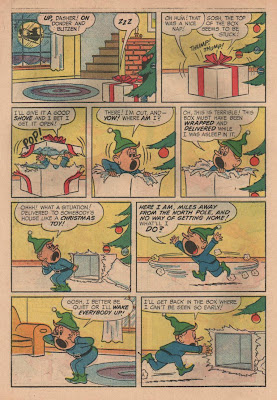 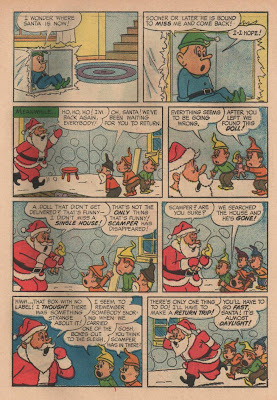 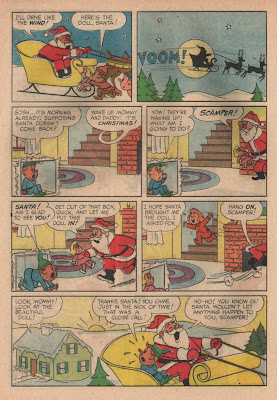 There is some funny verbal stuff in "Santa's Return Trip." Scamper, the over-worked "stock-room elf," has a touch o' the Tubby Type. It's a very soft story. The stakes are surprisingly low. To be honest, Scamper seems pretty replaceable. He would have had an interesting new life as the nameless little girl's living doll.

That's the John Stanley Christmas story I'd like to read! And, who knows--perhaps it's out there, waiting to be rediscovered...
Posted by Frank M. Young at 12:12 PM

Saved this one for reading to the kids on Christmas Eve. They were laughing pretty hard. Thanks, Frank!