Tubby in "The West Side Guys Get Skunked," from Tubby #5, 1953--story and artwork by John Stanley

The day will come when I exhaust all the comix written and drawn by John Stanley--that is, those that aren't currently in reprint status by our fine friends at Drawn + Quarterly!

I hear tell that they may publish the overlooked and under-rated Tubby series. If this is true, it's cause for joy! I find Dark Horse's scan/reprints of the color Little Lulus to be an eyesore. (Ditto for all their other scan-scourced reprint projects.)

In an attempt to downplay the age of the stories, DH chooses to pump up the brightness/contrast controls. This removes the amber hues of the half-century-old newsprint--at the expense of visual pleasure. The comix look harsh and uninviting. As well, they print 'em on slick paper--another roadblock to full enjoyment.

Yes, I am delighted that the later issues of Lulu are back in print! I'm glad to see them in color. BUT... it could be done much better.

Tubby is an important series in the Stanley canon. Aside from the obvious reasons--the series focuses on Stanley's most significant and fully-realized anti-hero figure--Tubby is a gateway to Stanley's 1960s work. Here, he experimented with the darker themes and character relationships that would come to full fruition in Dunc 'n' Loo, Melvin Monster and Thirteen Going On Eighteen.

These are often achieved in baby steps, but they happen most often in the pages of Tubby. Published quarterly at first, the title became the repository of John Stanley's only published cartooning work of the 1950s. As has been noted here before, Stanley was inspired to draw issues 2 through 9 in their entirety. That's 288 pages of rich, inspired comix art.

The contents of Tubby are little-known to most Lulu fans. You can find a few other posts on this series elsewhere in this blog. Stanley indulged in a series of exotic, unconventional book-length adventure stories, again unique to his 1950s work, in issues 2-4 and 6.

With the fifth Tubby, Stanley broke the pattern. The book's lead story, which I'll feature here soon, is a rather un-PC burlesque of Western adventure tropes. Perhaps it ended sooner than its creator expected. The back-up story, presented here today, is as close to Little Lulu territory as Stanley's Tubby gets.

Its settings are akin to the suburban idyll of Lulu, and it features the fearsome West Side Gang, in one of their only Stanley-drawn appearances. Another Lulu icon, the rich sociopath Wilbur Van Snobbe, figures in the story's stake-raising plot.

The simple beauty of Stanley's cartooning is a joy to behold. Much as I admire Irving Tripp's artwork, Stanley's has more oomph, and consistently achieves more with less. 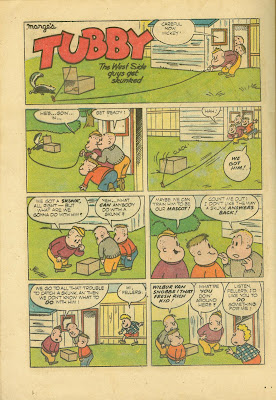 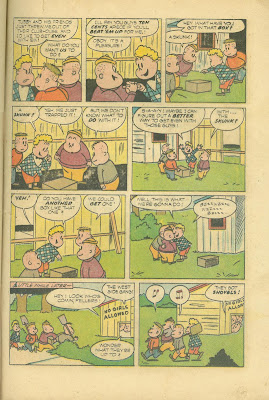 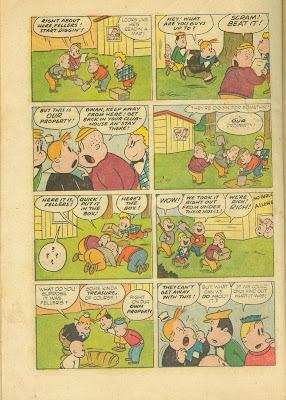 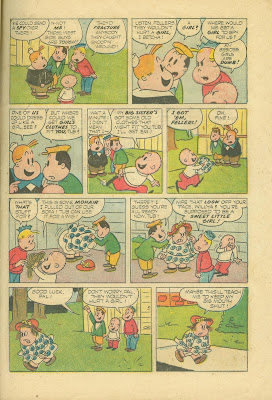 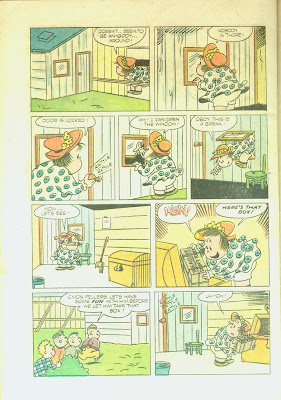 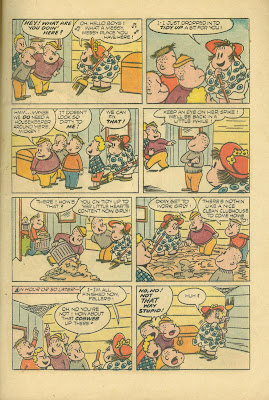 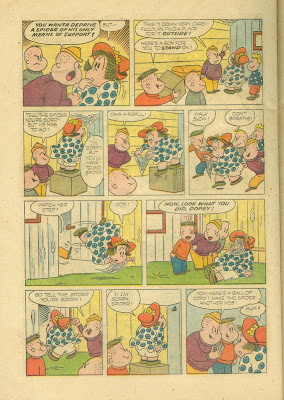 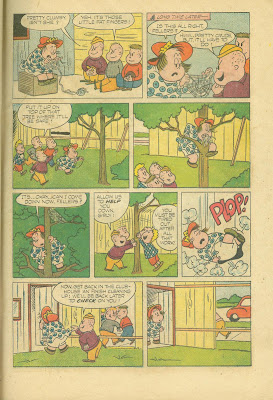 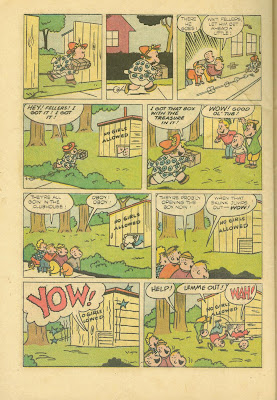 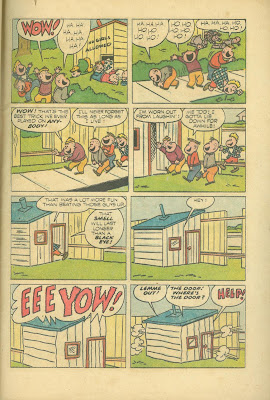 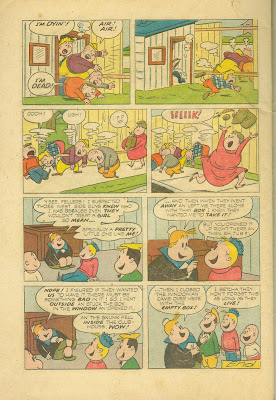 The John Stanley Theatre Of Cruelty is in full swing here. Galvanized by Wilbur Van Snobbe, the heartless, cruel scion of wealth, both good and bad guys gang up on poor Tubby. Our young anti-hero undergoes psychological-physical torment worthy of an R. Lee Ermey.

When your alleged friends force you to dress in drag (with mohair sofa stuffing for a wig) and enter enemy territory, your day is already not going well.

The mind-fudgery the West Side Guys inflict on Tubby reminds me of a scene from one of the few genuine horror movies I've ever seen: Jack Webb's The D.I. This 1957 chiller contains a similar sequence in which D.I./A-hole Webb forces his platoon to search for the corpse of a sand flea in a vast, tangled field--at night.

This would be MY worst nightmare. Tubby's forced crocheting of a substitute spider-web, while comically absurd, is a similarly wearisome, thankless task. His Pyrrhic victory over the West Siders--via the clever sleight-of-hand with the captured skunk--is a weak triumph, when compared to the mass of $h!t he must endure.

Tub seldom gives more than he gets. Thus, it's easy to like him, and to identify with his comic/horrific plights. Whether pursued by sociopathic, spanking-crazed loners, forced to endure endless violin lessons, or being badgered by Gloria, Wilbur, the West Side Guys and his so-called friends, Tub's life is full of risks and emotional land-mines.

Tubby endures. He'd make a good crisis counselor or hostage negotiator. I'd like to think that he grew up to such a career--one in which his problem solving skills AND his extreme egotism would work for him, and not deliver constant kicks to the shins.

NOTICE: You will note a PayPal donation button now added to Stanley Stories. After a lengthy struggle with both PayPal and Yahoo mail, I've successfully revived my PayPal account. (It's a loooooooooong story, folks...)

If you enjoy this blog, and can spare some $$$, please donate to Stanley Stories! Your kind donations will enable us to better serve you in 2010--and beyond!
Posted by Frank M. Young at 1:50 PM

Labels: hatred of the rich, PayPal Donations, Stanley as cartoonist-writer, Stanley in the 1950s, Tubby, West Side Boys

I say that when you run out of Stanley stuff, we start all over nad read 'em AGAIN!

Thanks for all your insite and labor. I didn't know who Stanley was before your blog.

And I thought I knew everything. :)

Your comments about the slick paper and garish coloring of the reprints are exactly right. I also don't understand why they insist on such a small (6"x9") page size. The ideal reprints would be duplications of the originals. Until then, your blog is definitely the best place to view these old comics.

I recall one glorious day, about 12 years ago, when I received a package in the mail containing about 15 Little Lulu comics I had ordered from a comic book dealer at a good discount. It was a huge splurge for me at the time. When I bought the comics, the sharp gal on the phone at the dealers mentioned they had several Tubbys they could throw in real cheap like. Sure, I said. So I got the first 10 issues of Tubby, which included all the Stanley drawn issues. I had no idea Stanley drew these at the time. I remember feeling rather disappointed in the Tubbys... it was my first exposure to them. I disliked the looseness of the art as compared to Irving Tripp's neat, precise line. Well, things change. Now, the Stanley issues of Tubby are my favorites of all of Stanley's work. If I were a Drawn and Quarterly editor, I'd definitely reprint these. I hope that, if they do, they make sure to give John Stanley credit as an ARTIST as well as a writer... something they neglected to in the Melvin Monster volume.

I totally agree with Myrrpage, the ideal reprints would be duplications of the originals. I think there's a great satisfaction in the length of a typical comic book. When I've read the reprinted stuff with my son, his/our attention starts to fade after a couple of stories. If we were reading an actual comic, we'd have the satisfaction of actually finishing something.