Here's another of the seven Peterkin Pottle stories John Stanley wrote and drew in 1948.

The series wasn't successful, although Western Publishing and Dell Comics gave it a fighting chance. It's the first consistent occurrence of The Stanley Darkness in Stanley's work. Darkness creeps around the edges of most of John Stanley's comix.

This original concept, about an alienated, disliked, self-absorbed junior Baron Munchhausen, is strong. Each of the seven stories has at least a moment of brilliance. Yet Peterkin is a rather cold, unlikable character.

In contrast, Tubby Tompkins, who is also a self-absorbed outsider figure, is likable. Tub has self-confidence--in ridiculous excess. He believes in himself as the center of the universe. Because he is so sure of himself, Tubby shrugs off the hostilities of the world around him. In his mind's eye, he is always right, and it's the fault of the less hep world around him that it--and its inhabitants--don't immediately get how great and right he is.

Peterkin is unconfident, diffident and isolated--the sad-sack kid everyone recalls from their grade-school experience. He's the one who sat by himself on the school bus, who ate his lunch alone, whose interactions with fellow children were usually negative and harmful.

Young Pottle's salvation is his retreat into tragicomic fantasies that reflect a distorted burlesque version of the cliched movies, adventure fiction, newspaper funnies, radio shows and, yes, comic books that were the entertainment currency of postwar American kids.

His daydreams are often disturbing: full of violence, threat, and a reflection of the indifference others show him in his waking life. Peterkin shrugs off holocausts as they occur around him.

He comes to each time, and too soon realizes he's still the same sad schlumpf, a punching-bag for his bored social superiors...a kid trapped in a life that thoroughly sucks.

The early Pottle stories are almost unbearably painful. This ties them to Stanley's later Thirteen Going On Eighteen and Melvin Monster stories. By the 1960s, Stanley had let The Darkness become his primary compass as a creator. This curious mixture of brassy, razor-sharp situation comedy and the dangerous worlds in which his figures reside can be a similarly discomfiting experience.

This dance of dark and light is the primary fascination of John Stanley's work. His strengths as a storyteller seem hard-wired into this eternal contrast of misery and joy. At his best, Stanley mingles these opposites with seeming effortlessness.

This is the next-to-last Pottle story. By this time, it would appear that Stanley realized he'd painted his creation into too dark a corner. Thus, the world around Peterkin seems somewhat softer and kinder here.

Though Peterkin is still a sitting duck for his fellow young males, the girl, Pam, is affectionate, sincere and engaging towards him. It gives us, the readers, a feeling that there may be hope for this poor inward kid after all...

Stanley's covers for the "Pottle" issues of Raggedy Ann and Andy are among his sharpest cartooning of all. Bold, decisive brush-strokes give his figures a Walt Kelly/Dan Noonan-esque quality.

As well, we get to see Peterkin colored with standard Caucasian flesh tone, rather than the fishbelly-white stylization of the inner pages. I'm not saying the color choices of the stories are wrong. They seem to be calculated to give this series an air of otherness.

This scan comes from a tattered, world-worn copy of the comic. It would appear this particular issue was much enjoyed by its readers of over half a century ago... 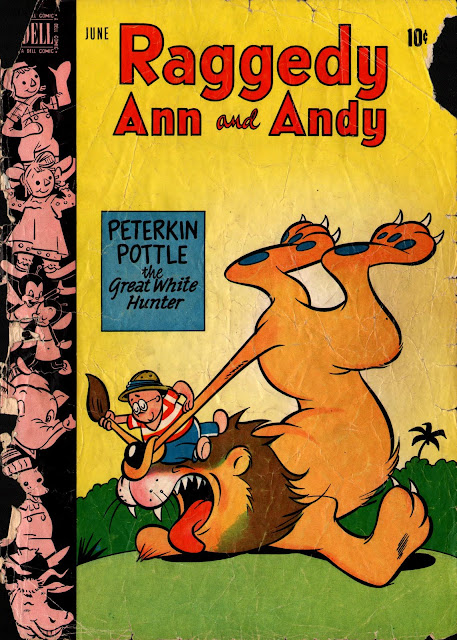 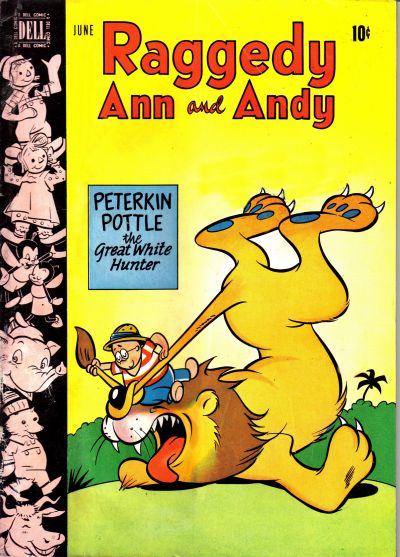 Here's a clearer (tho' much more high-contrast) version of the cover, from the Grand Comic-book Database's website. 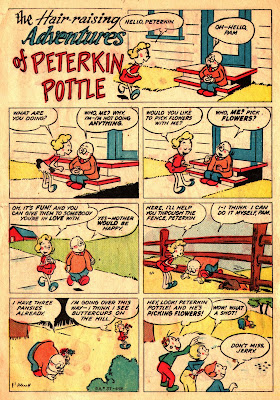 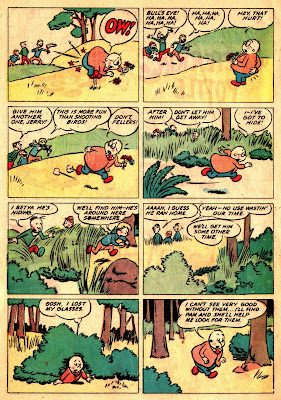 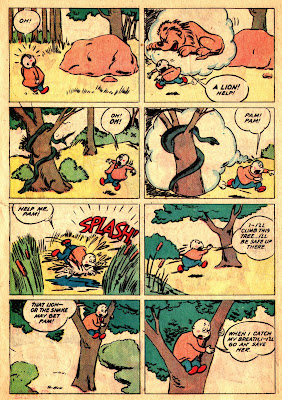 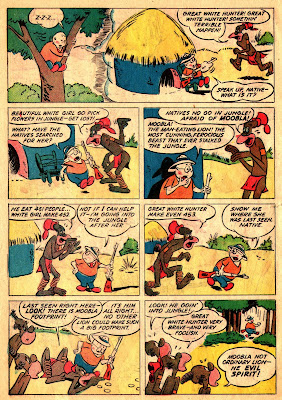 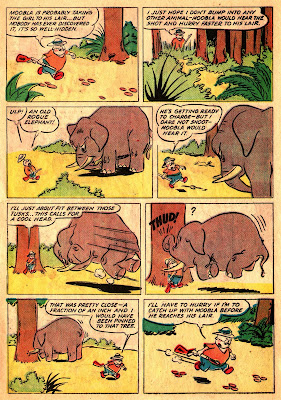 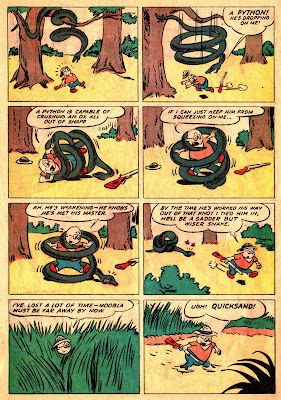 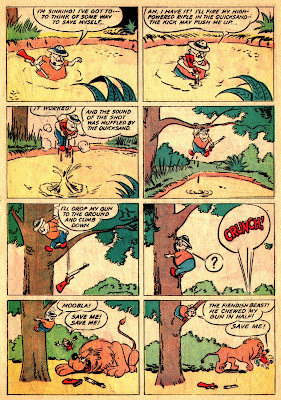 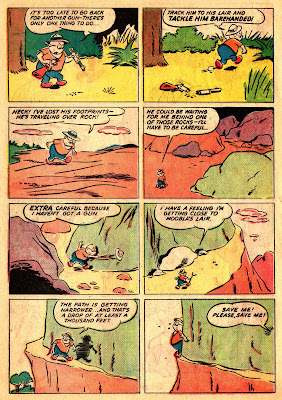 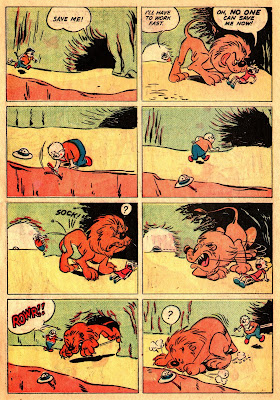 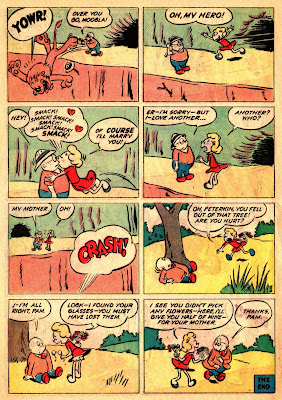 Although Pam's kindness to Peterkin somewhat softens this story, there is still a great deal of cruelty in this story. It's two-way cruelty. First is the torment inflicted upon Pottle by the "reg'lar fellers" with the slingshot-fired rock-to-the-tush. Pottle loses his coke-bottle specs, and interprets the blurred shapes around him as jungle animals and landscapes.

These, alas, include a late occurrence of the big-lipped stereotyped native African. While the characters are intended as parodies of jungle-movie cliches, and not informed with bias or cruelty, they are jarring.

Ditto for the festival of violence to wild animals: meant as a satire of the excesses of pop culture, but delivered with a sharper edge than expected.

Stanley's rendering of animals is among the joys of his cartooning. The hybrid of 1940s Hollywood animation style and his crabbed Thurber-esque body construction is beautiful.

This story also has an occurrence of quicksand--a favorite nightmarish stakes-raiser in John Stanley's fictive universe. Pottle's clever escape from the goo is Tubby-like in its self-assured success. Peterkin is more active and aggressive than usual in this story's fantasy sequence.

Stanley's cartooning style of the later 1940s was in flux. I like the quality of his cartoon art, from its earliest examples to the final works of the 1960s. That said, some of his 1940s work suffers from Stanley's use of the awkward, poorly designed character styles of Marge Buell. If Stanley's early Little Lulu and Woody Woodpecker art looks ugly to some, consider the style this work was filtered through.


Peterkin Pottle and Jigg and Mooch are laudable attempts to break free of this confining cartoon style. The looseness and vibrancy of Stanley's Pottle artwork is striking. The landscapes of this story are beautifully realized, with economy of line and an impressive understanding of contour lines. This piece is among my favorite of all his comic art.

In this issue is another of Stanley's "Raggedy Ann and Andy" stories. While not as pluperfect freaky as the one I posted awhile back, it's certainly worthy of inclusion here, and will appear on this blog in good time.
Posted by Frank M. Young at 6:07 PM

Of course, the term African-American gets used rather over inclusively, as what's represented in the story is the unfortunate western concept of an African-African. Not every black person in the world lives in America. Yet I've heard people say, in all seriousness and without thinking about it "Oh he's an African-American from the UK." Nitpicking perhaps, but the point is, we had one cruel and insulting view of blacks who were Americans, and another entirely of what we deemed the primitive tribes of Africa. It all comes from not really knowing about other cultures or caring enough to learn. May we learn to keep those caricatures in the past.

Indeed. I'm not sure what the proper term might be. I suppose 'native Africans' might work better.
So that I may not appear a total drooling imbecile in public, I'll make global changes in the post. Thanks for your PC help!

Peterkin Pottle is a feast of great storytelling in service of politically incorrect stories. The American Indian one has some amazing visuals (and one of the funniest Stanley crowd shots outside of Lulu) but it's...all about killing Injuns.

Stanley's cartooning is so charming on this feature--brushy lines with great character designs and almost Milt Gross-esque energy to the action (not quite that loose, but strangely evocative of the 30s for me).