I found three 1948 issues of Our Gang Comics with one or two Stanley pieces in each issue. This would seem to confirm that Our Gang offered a temporary way-station for our hero after he quit or lost his five-year berth on Dell's New Funnies title.

By 1948's end, Stanley was locked into writing and de facto-drawing the then bi-monthly, eventually 12-times-a-year-plus-giant-specials Little Lulu book, which would soon become among Dell/Western's best sellers.

The bulk of Stanley's late Our Gang pieces are decidedly so-so. Stanley still kept the series' slant on the two mice, Jerry and diaper-clad Tuffy.

The following story is among the better late OG efforts. It was illustrated by Harvey Eisenberg, a skilled stylist who usually had crap scripts. Its theme of a magician's hats ties it to many a classic Little Lulu and Tubby story--and, as well, to his first major one-shot story for Dell's "Four Color" series, "Andy Panda and the Magic Hat," which you can read HERE. 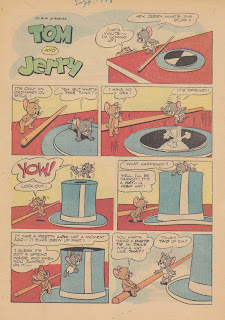 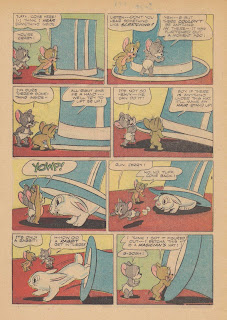 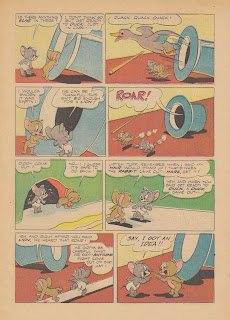 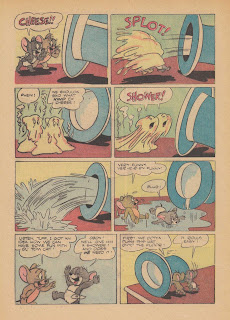 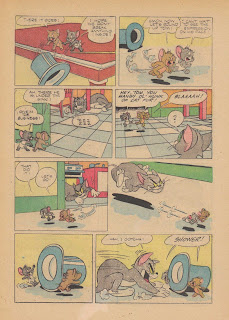 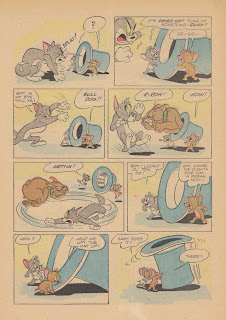 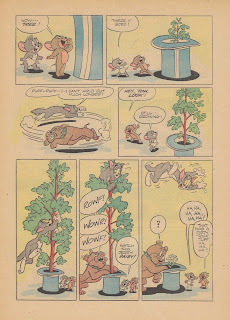 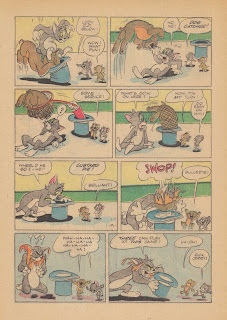 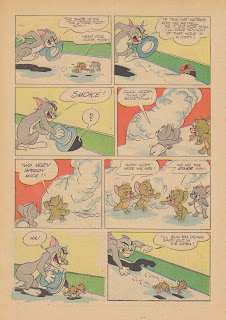 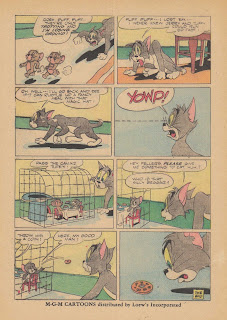 Stanleyisms galore, one moment of genuine brilliance (page four, first two tiers) and unexpected, curious finale: Stanley did not phone in this 10-page story. It's not as sharp as his contemporary Little Lulu writing, but much of that has to do with the limited returns on the basic T&J concept.

Stanley did write one genuinely brilliant story on this late OG run (read it HITHER.) It's telling that this superb story has not hide nor hair of Tom Cat.

Stanley's interest was in the mice--in exploring their childlike relationship with an oversized adult world and its many random objects, in Tuffy's obsession with wearing and curating his collection of diapers, and in the ground-zero game of survival they play each day of their lives.

Stanley did have some fun with Tom's Tubby-esque, self-deluded character in a series of "Adventures of Tom" stories for OG. I ran one of them several months ago. I've already given you two links to prior posts, so you'll have to find this one on your own (that is, if you're interested.) He never seemed interested in making Tom a more interesting character in the T'n'J stories.

Tom displays some Tubby-esque flashes of self-absorption, self-importance and narcissism in Stanley's hands, but in most of his stories for this series (present one included), Tom is just a stock Terrible Thwarter/Obstacle figure, without much embellishing or refinement.

It brings Stanley's "Tom and Jerry" stories down a notch or two from his best writing for New Funnies or Lulu (or from the two original series he wrote and drew in the late 1940s, "Peterkin Pottle" and "Jigger and Mooch.")

The device of the magician's hat, and its many unpredictable eruptions and stake-raisings, infuses this story with some welcome imaginative humor. The mice's requests for cheese and shower are a flash-forward to Stanley's harder-edged, more sitcom-flavored writing of the late 1950s and early '60s.

This was Stanley's final Tom and Jerry story. Harvey Eisenberg took over the series with the next issue. I wish Eisenberg and Stanley had collaborated more than on these late OG efforts. Eisenberg's gorgeous cartoon art would have bolstered Stanley's work considerably.

(Pity poor Eisenberg the mechanical, crude scripts he had to illustrate for the post-Stanley run of "Tom and Jerry." It's perfect proof that superb artwork can't rescue a poor script.)

This issue hit the stands while Little Lulu #5 was on sale.  That issue contains one of Stanley's early Lulu masterpieces, the "Tubby" story, "The Gourmet."

Lulu went monthly with issue 7, which would indicate the book's sales were strong, But it also meant that Stanley had the responsibility of creating 36 pages of content 12 times a year. Thus, his other comic book work drops off for a few years.

I believe his next non-Lulu project would be the ill-fated Krazy Kat title. But, as said at the start of today's post, I keep digging, and new Stanley Stories keep showing up. I hope this will rewarding formula will continue...

Labels: fate, magicians, Our Gang Comics, Stanley in the 1940s, Tom And Jerry